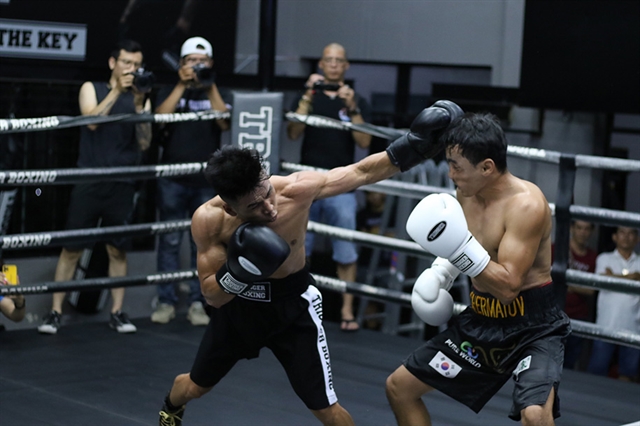 HÀ NỘI — Trần Văn Thảo is on verge of being the first Vietnamese athlete to take an International Boxing Association (IBA) bantamweight belt.

The former World Boxing Council Asia champion will fight Tanzanian Fadhili Majiha at the Trigger Boxing Club in HCM City on July 18 and a win would be a remarkable milestone for Vietnamese boxing.

“Being the first one ever to wear the IBA belt would not only be meaningful to Thảo and me but also Việt Nam,” said coach Trịnh Văn Trí.

“We are the Vietnamese who put the first brick in the formation of professional boxing in Việt Nam. We always hope to popularise our boxing ability in the world. While I am researching information, Thảo trains and realises our dreams.

“The IBA match will be a good opportunity for us to make a dream come true. We are working very hard to prepare for it,” he said.

Thảo is training eight hours per day and following a strict nutrition and gym schedule to prepare for the fight.

The fight is set to be the toughest yet for Thao, who turns 28 in 10 days.

Majiha is a year younger than Thảo but has fought 44 matches in which he won 26 (with 12 KOs), drew four and lost 14. The world No 73’s best result was a title at the World Boxing Association Pan African in 2018.

Thảo’s only defeat was to Australian Billy Dib at the match for the World Boxing Council Australasian title in December 2019, after 10 rounds.

“Fadhili Majiha is a young but experienced and brave puncher. He has gone through a lot of big fights in his career. Therefore, to make sure of a positive result, we have to prepare carefully in all fields of strength, technique and strategy. It is a very prestigious belt, we will do our best to keep it home,” said coach Trí.

As one of the activities for the big event, Thảo defeated Uzbekistan’s Shermatov Ravshanbek in a bout during the Trigger Championship 11 tournament on March 20.

He will have two more fights in the coming weeks.

“I want to perfect my technique to be ready for any challenge, and am doing it step by step,” said Thảo.

“After the WBC Asia title, I am looking toward a higher target, the world title. In case of winning the IBA belt, it would be a big step in the career of my coach and me.

“I have missed the ring a lot after months of being kind of sidelined due to COVID-19. I am now full of energy and ready to explode at any time. I hope I can secure the second title, the biggest task in 2021,” he said.

Thảo made his name internationally after defeating Indonesian George Lumoly to become the first Vietnamese boxer to win the WBC Asia title in November 2017.

But he couldn’t compete in the 2018 WBC championship after an injury sustained due to a traffic accident and the organisers stripped him of the title. VNS

Japan plans to release into the sea more than 1 million tonnes of contaminated water from the destroyed Fukushima nuclear station, the government said on Tuesday, a decision that is likely to anger neighbours such as South Korea.

The move, more than a decade after the nuclear disaster, will deal another blow to the fishing industry in Fukushima, which has opposed such a step for years.

The work to release the water will begin in about two years, the government said, and the whole process is expected to take decades.

“On the premise of strict compliance with regulatory standards that have been established, we select oceanic release,” the government said in a statement after relevant ministers formalised the decision.

The water needs to be filtered again to remove harmful isotopes and will be diluted to meet international standards before any release.

The decision comes about three months ahead of the postponed Olympic Games to be hosted by Tokyo, with some events planned as close as 60 km (35 miles) from the wrecked plant.

The disposal of contaminated water from the Fukushima Daiichi plant, run by Tokyo Electric Power, has proved a thorny problem for Japan as it pursues a decades-long decommissioning project.