More than 600 ao dai (Vietnamese traditional costume) by 15 local designers were showcased on Friday night at the Temple of Literature in Hanoi as part of a series of activities titled “Our Ao Dai ” within the framework of a campaign to honor the heritage as well as the beauty of Vietnamese women.

The campaign was organized by the Vietnam Women’s Union (VWU) Central Committee.

The 600 designs in the show’s 15 collections, themed ‘The World in Vietnamese Ao Da i,’ were made from Vietnamese traditional materials such as silk and ramie, featuring scenery and cultural features of 15 different countries in the world.

“These are just the first 15 out of 100 collections inspired by the cultural identities of 100 countries that Vietnamese and international designers will come up with this year, to convey the idea that the Vietnamese ao dai is extremely adaptable, even to very different cultures, and that ao dai is not only loved domestically but also can spread globally,” said designer Minh Hanh, director of Friday night’s event.

The stage was also decorated with green ramie pots and white silkworm cocoons to match the collections’ materials. 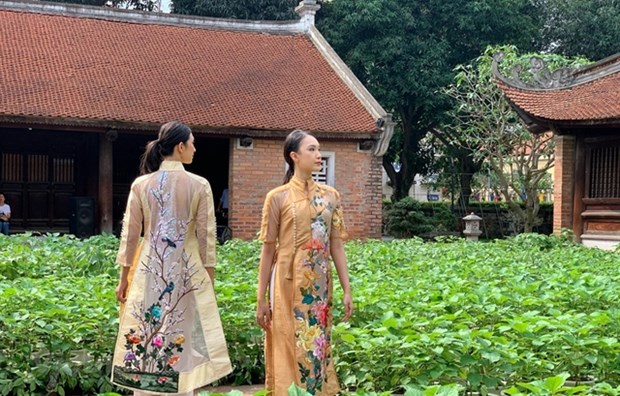 Hanoi (VNS/VNA) – Fifteen fashion designers across the country will gather to showcase their newest collections of ao dai ( Vietnamese traditional dress ) during a fashion show taking place tonight at Thai Hoc yard in the Temple of Literature in Hanoi.

The show, entitled Ao Dai Cua Chung Ta (Our Ao Dai), will present more than 600 ao dai made of silk and delicate ramie fabric by designers from HCM City, Hanoi, Hue, Tien Giang, Can Tho, and Dak Lak. The event is part of the initiative called ‘Vietnam’s Heritage of Ao Dai’ that was launched in 2019 by the Vietnam Women’s Union.

Speaking at a press conference about the event, Vice President of the Vietnam Women’s Union Bui Thi Hoa said: “Ao dai is part of our Vietnamese cultural heritage. The outfit has been influenced by the changing of history and developed to become an iconic image of Vietnamese women. In the current context of strong international integration, the preservation and promotion of Vietnamese culture, through the honour of this national dress, is extremely necessary.”

International award-winning Vietnamese designer Minh Hanh, who is the art director of the show, said that each designer should take responsibility in the preservation and promotion of the Vietnamese national dress.

Mentioned the materials of the dress presented during the show, she said: “While silk is beautiful, the delicate ramie fabric is more friendly.”

“Although ramie fibre is popular, the delicate ramie fabric is still something new for most of us. This natural material is really a gift from the energetic work of GAI AP team [a company specialising in ramie planting and production],” the designer said.

Each collection presented during the night has been created with inspiration from other foreign cultures.

While designer Trung Beret from Dak Lak will unveil his collection inspired by the culture of neighbouring country Laos, the collection by designer Tran Thien Khanh from Hue takes inspiration from the hanbok of the Republic of Korea.

“Having the chance to travel all over the world, I maintain a habit to create Vietnamese ao dai presenting cultural features of the countries where I’ve been. In 2018, coming back from a business trip to India where I’ve been to showcase Vietnamese ao dai, I created four ao dai featuring hand-painted decorative patterns of India,” Han told Vietnam News.

Former Miss Vietnam said it took her only two weeks to complete the collection of 15 ao dai for the show tonight.

The Hanoi-based Spanish designer Del Valle Cortizas Diego will bring to the event his collection from the Chula brand.

The show Ao Dai Cua Chung Ta will also present collections inspired by other countries such as Thailand, China, Japan, Egypt, the US, Germany, France, Italy, the Netherlands, and Russia.

Especially, some “special models” will be seen on the catwalk which will be adorned by thousands of ramie plants. They are veteran movie stars Tra Giang, Hoang Cuc, Thu Ha, Lan Huong, and Minh Hoa.

In addition, wives of Indian, Laos, and Belarusian ambassadors will join other models to present ao dai during the show./.

The event is part of the national campaign entitled “Ao dai – a Vietnamese Heritage” launched by the Vietnam Women’s Union Central Committee to honor the beauty of Vietnamese woman in their traditional costume.

A fashion show featuring Vietnamese traditional Ao dai titled “Our Ao Dai” will take place on the evening of April 9 at the Temple of Literature – Quoc Tu Giam, Hanoi.

The event will feature more than 600 Ao dai outfits from 15 collections by Vietnamese designers, including Minh Hanh, Ngoc Han, Lan Huong, Chu La and Trinh Bich Thuy. More than 400 models who are actresses, beauty queens, amateur models, especially the ladies of the ambassadors of Italy, India and Laos will walk the runway dressed in Ao dai.

On this occasion, 15 sets of Ao dai will be donated to the Vietnam Women’s Museum by the designers.

Traditional Ao dai is an important cultural heritage associated with the beauty of Vietnamese women. Through the event, the organizing board wishes to honor the traditional attire, which will be included in the list of cultural heritage at national level, with the prospect of being nominated as the Cultural Heritage of Humanity.

It is also aimed at preserving and promoting Vietnam’s traditional values and the beauty and grace of the Ao dai , a symbol of feminine beauty in Vietnam as well as raising awareness of preserving and protecting the Vietnamese Ao dai among the community.

The event is part of the campaign titled “Ao dai – a Vietnamese Heritage” that is launched by Vietnam Women’s Union Central Committee.

The ao dai (Vietnamese traditional gown) will be worn by Miss Vietnam Ngoc Han, more than 400 models, actresses, and guests, including the spouses or partners of the ambassadors of Italy, India, Laos to Vietnam.

“Traditional Vietnamese materials will add a bold imprint of the national origin on the ao dai. If Vietnamese audiences are familiar with silk-made ao dai, for the first time they will know another wonderful material for making ao dai – hemp fabric, a friendly and pleasant material,” said veteran ao dai designer Minh Hanh, the general director of the show.

These ao dai also show cultural exchanges with other countries, with motifs from the traditional cultural beauty of many countries around the world.

On this occasion, designers presented 15 ao dai to the Hanoi-based Vietnam Women’s Museum.

Traditional ao dai are an important cultural heritage associated with the beauty of Vietnamese women. In recent years, many researchers have proposed that cultural authorities seek recognition of the ao dai as a World Intangible Cultural Heritage from the United Nations Educational, Scientific and Cultural Organization (UNESCO).

The April 9 fashion show is part of a national campaign titled “Ao dai – Vietnam’s Cultural Heritage” launched by the Vietnam Women’s Union Central Committee. It aims to emphasize the modern beauty of Vietnamese women in their traditional ao dai .

The event will showcase 15 ao dai collections inspired by the cultures of 15 countries including India, Spain, Russia and Japan. The collections are done by 15 designers from across the country, using traditional materials like silk and flax fabric.

More than 400 models, including actresses and ladies from the embassies of Italy, India and Laos will take to the ramp, showcasing many ao dai varieties. The Temple of Literature will be decorated with flaxes to help people gain a better understanding of the traditional material, organizers said.

Last month, women from different localities in Vietnam were encouraged to wear the ao dai in their daily lives as a part of the “Ao dai – Vietnam’s Cultural Heritage” campaign.

The area in front of Khue Van Cac (the pavilion of the constellation of literature) in Van Mieu – Quoc Tu Giam became the “stage” for 15 designers to introduce more than 600 Ao Dai designs. Among them are such renowned designers as: Minh Hanh, Ngoc Han, Lan Huong, Chu La, and Trinh Bich Thuy.

The event, co-organised by the Thang Long Institute for Cultural Research and Tinh hoa Dat Viet Magazine, also features the participations of more than 400 models, actors, and guests, including wives of ambassadors of Italy, India, Laos and Belarus.

Ao dai has long been a traditional costume and a typical cultural feature of Vietnam. Through ups and downs with constant changes, ao dai still honours the gracefulness and elegance of Vietnam ese women.

The event “Ao Dai Cua Chung Ta” contributes to the continued promotion of community awareness and responsibility in preserving and protecting traditional Ao dai, and honouring and promoting Vietnamese traditional costumes; while, at the same time, promoting cultural exchange between Vietnam and other countries around the world./.