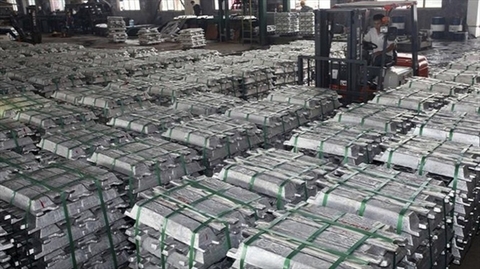 The Ministry of Industry and Trade has deciced to continue the imposition of anti-dumping duty on certain aluminium products originating from China. — Photo tapchitaichinh.vn

The Ministry of Industry and Trade has decided to continue imposing anti-dumping duties on certain aluminium products originating from China with a tax rate from 4.39 per cent to 35.58 per cent after carrying out the first review.

On September 28 last year, the Ministry of Industry and Trade issued a decision to impose anti-dumping duties on some aluminium products originating from China with a rate from 2.49 per cent to 35.58 per cent.

The ministry initiated the investigation into the anti-dumping case in January 2019. The investigation found injuries to the domestic aluminium industry. Specifically, most domestic producers suffered losses, many production lines had to stop operating and a large number of workers lost jobs.

The major cause was found to be the dumping of aluminium products originating from China at margins of 2.49 per cent to 35.58 per cent.

In mid-2020, the ministry received an inquiry to conduct the first review on anti-dumping duties on Chinese aluminium products.

After the review, the ministry issued a decision on April 20 this year which took effect five days later to continue levying anti-dumping duty on some aluminium products originating from China.

On the same day, the ministry also issued a decision after carrying out the first review about the imposition of anti-dumping duty on some painted flat-rolled alloy and non-alloy steel products originating from China and the Republic of Korea. Accordingly, the anti-dumping duties of 2.56 per cent to 34.27 per cent were imposed. — VNS 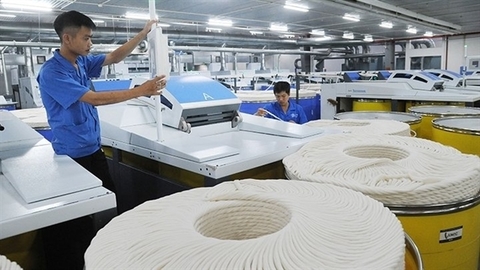 India has decided to not impose anti-dumping duties on some viscose spun yarn products imported from Viet Nam, according to the Ministry of Industry and Trade’s Trade Remedies Authority of Viet Nam.

The authority received information on Thursday about the Indian Ministry of Finance’s decision to not impose anti-dumping duties on those products originating or imported from China, Indonesia and Viet Nam.

Viscose spun yarn contains 85 per cent or more of artificial viscose staple fibre than sewing thread and is mainly used for weaving or knitting for production of fabric.

Previously, on December 30, 2020, the Directorate General of Trade Remedies under the Indian Minister Commerce and Industry issued the final investigation conclusion No 6/41/2019-DGTR which proposed that the Ministry of Finance of India impose taxes of US$0.25-0.8 per kg on the products under investigation.

For products from Viet Nam, the proposed anti-dumping duty was $0.41 per kg.

The case was initiated on January 14, 2020, by the Indian Manmade Yarn Manufacturers Association, accusing artificial fibres originating or imported from China, Indonesia and Viet Nam were dumped on India.

The association alleged that material injury to the domestic industry was being caused due to dumped imports from Viet Nam, China and Indonesia and requested imposition of antidumping duties on the imports of the goods.

The Indian association claimed that the subject goods, which were being dumped into India, were identical to the goods produced by the domestic industry, stressing there were no known differences either in the technical specifications, quality, functions or end-uses of the dumped imports.

According to the Viet Nam General Department of Customs, Viet Nam’s total export turnover of products under this investigation stood at $9.7 million in 2019, a year-on-year increase of 78 per cent compared to 2018. — VNS

The Malaysian Ministry of International Trade and Industry (MITI) has officially applied anti-dumping duties of between 7.81% and 23.84% on cold rolled stainless steel imported from Vietnam, according to the Trade Remedies Authority of Vietnam. The move comes following the MITI issuing a final conclusion regarding the anti-dumping investigation into cold rolled stainless steel which originates from both Vietnam and Indonesia.


Following this enquiry, the MITI has decided to impose anti-dumping tax on goods imported from both countries, with the applicable tax rate ranging between 7.81% and 23.84% for Vietnamese producers, and from – 0.2% to 34.82% for Indonesian exporters.

The MITI officially launched an investigation into the case on July 28, 2020, based on the request made by the domestic steel industry represented by Bahru Stainless Stn. Bhd.

The MITI announced on December 28, 2020, the preliminary conclusion of the case, deciding to apply a temporary anti-dumping tax in order to prevent damage for its domestic manufacturing industry within 120 days.

The temporary tax rate ranged between 7.73% and 34.82% for both Vietnamese and Indonesian exporters.

In response to this, the Vietnamese Ministry of Industry and Trade imposed temporary anti-dumping measures on some H-shaped steel products originating from Malaysia, with tax rates of 10.2% placed on Malaysian producers.

The final conclusion is anticipated to be released in the second quarter of this year.

This comes after the Trade Remedies Authority of Vietnam received information on May 6 about the Indian Ministry of Finance’s decision to not impose anti-dumping duties on a number of artificial fiber products which originate from China, Indonesia, and Vietnam.

Previously on December 30, 2020, India’s Ministry of Commerce and Trade had issued their final investigation into the case, while the Indian Ministry of Finance subsequently proposed imposing anti-dumping duties of between US$0.25 and US$0.8 per kilo on these products. In line with this suggestion, it was put forward that anti-dumping taxes on Vietnamese items should be at US$0.41 per kilo.

The plaintiff is the Indian Manmade Yarn Manufacturers Association, with the investigation period beginning from April 1, 2019, to December 31, 2019.

Data compiled by the General Department of Vietnam Customs indicates that the country’s total export turnover of products subject to an investigation stood at US$9.7 million in 2019, representing a year-on-year increase of 78% compared to 2018.

The trade remedies authority of Vietnam received a notice to the effect from the Indian Ministry of Finance Thursday.

India also decided not to impose anti-dumping duties on synthetic staple fiber originating or imported from China and Indonesia.

It had begun the anti-dumping investigation in January last year at the request of the Indian Manmade Yarn Manufacturers Association.

In December, its Directorate General Of Trade Remedies had recommended duties of $0.25-0.8 per kilogram, including $0.41 on Vietnamese products.

Vietnam exported $3.7 billion worth of fiber last year, down 10 percent, according to the Ministry of Industry and Trade. Exports to India fell 66 percent to $41 million.

Most notably, upholstered furniture originating from both China and Vietnam will be subject to a tax rate of 295.5% and 101.5%, respectively, when entering the Canadian market.

According to information given by the CITT, the dumping and subsidising of certain upholstered domestic seating which either originates or is exported from both China and Vietnam has served to caused damage to Canada’s domestic furniture industry.

The CITT therefore plans to continue conducting an investigation into the matter, with the final results being released before September 2.

In total 28 Chinese manufacturers are anticipated to face anti-dumping tax rates ranging from 20.65% to 226.45%, while seven Vietnamese manufacturers will be subject to duties of between 17.44% and 89.77%.

This follows the CBSA initiating an investigation in December, 2020, based on Palliser Furniture’s complaint, with support from other manufacturers such as Canadian Elran Furniture Ltd ., Jaymar Furniture Corp., EQ3 Ltd. and Fornirama Inc.

CBSA has also revealed that the market size of some upholstered seats in Canada stands at an estimated US$675 million per year.