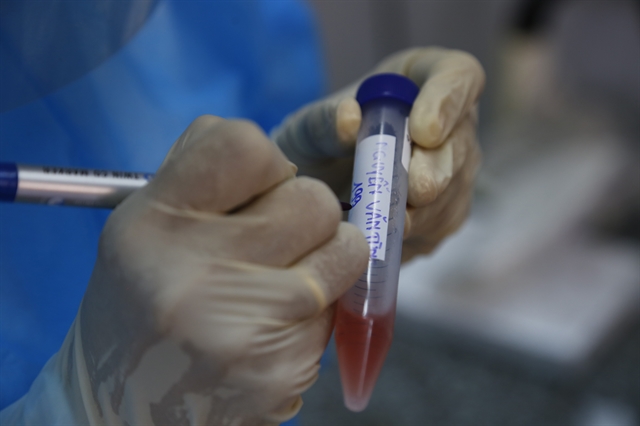 HÀ NỘI — A 71-year-old woman with a range of underlying health issues from the southern province of An Giang has become Việt Nam’s 62nd COVID-19 related death.

The treatment subcommittee of the National Steering Committee for COVID-19 Prevention and Control on Friday announced the passing of COVID-19 patient No 8,217 in Châu Thành District, An Giang Province.

The woman had contracted pneumonia, suffered from high blood pressure and had been a type 2 diabetic for more than 10 years.

On June 2, the woman returned from Cambodia to Việt Nam together with her daughter and grandchild via the Mộc Bài International Border Gate in the southern province of Tây Ninh, where they were all quarantined on arrival.

After testing positive for the coronavirus two days later, she was hospitalised at Bến Cầu medical centre in a state of exhaustion and with chest pain.

Her diagnosis was pneumonia and acute respiratory distress syndrome associated with COVID-19.

On June 11, the patient was put on mechanical ventilation and received intensive care, however, due to the rapid progression of the infection, worsening respiratory failure and underlying chronic health problems, she did not respond well to treatment and died on June 14.

Nearly seven years ago, on December 11, 2014, the United Nations General Assembly declared June 21 would be celebrated as the International Day of Yoga every year. The declaration came after the call for the adoption of June 21 as International Day of Yoga by Prime Minister Narendra Modi during his address at the UN General Assembly on September 27, 2014, when he stated: “Yoga is an invaluable gift of India’s ancient tradition. It embodies unity of mind and body; thought and action; restraint and fulfilment; harmony between humankind and nature; a holistic approach to health and wellbeing.”

Every year since then, the Embassy of India has held International Day of Yoga celebrations in Việt Nam in close co-operation with local governments and various socio-cultural organisations. It is heartening to see the popularity of yoga today across the length and breadth of Việt Nam. Last year, thanks to the successful containment of COVID-19 in Việt Nam, we worked with the provincial authorities of Quảng Ninh Province to hold an impressive event on the shores of the UNESCO cultural heritage site at Hạ Long Bay. This year, due to the constraints brought by the complex development of the COVID-19 situation, we will be observing the 7th International Day of Yoga using a virtual platform.

A gift of ancient India to the world, yoga has become a way of life for millions across the world, including in Việt Nam. Literally, the word ‘yoga’ means ‘to unite’. Indeed, yoga symbolises our mutual affinity and a strong bond connecting the entire humanity in the shared pursuit of wellbeing and happiness. Yoga also helps create harmony between humankind and nature. Today, when the world is facing the onslaught of the COVID-19 pandemic, yoga has become even more relevant – by helping us maintain a healthy regimen and boosting our immunity and sense of balance in these extraordinary times.

In a message sent to Prime Minister Phạm Minh Chính on the occasion of the International Day of Yoga this year, Prime Minister Modi underlined yoga’s inherent power to connect humanity and highlighted the special relevance of this year’s theme for the International Day of Yoga – ‘Yoga for Wellness’ – in the current context of the COVID-19 pandemic. This theme reflects the collective concern for the good health and wellbeing of people across the globe as well as our endeavour to ensure that we focus on both fitness and wellness.

By celebrating the International Day of Yoga on June 21 – from our homes and with our friends and families – let us celebrate our common humanity and contribute to the global healing process. Let us embrace yoga to make wellness a part of our lives.

To celebrate the 7th International Day of Yoga, the Indian Embassy’s Swami Vivekananda Cultural Centre will hold a series of virtual Yoga sessions in association with various partner organisations in Việt Nam during June 19-27.

These include the Việt Nam Buddhist Sangha, Việt Nam-Indian Friendship Association of Hà Nội, Centre for India Studies at the Ho Chi Minh National Academy of Politics, the Việt Nam Institute of Indian and Southwest Asian Studies (VIISAS) at the Việt Nam Academy of Social Sciences, and the Indian Business Chamber (INCHAM) in Hà Nội.

In the run-up to the IDY 2021, Swami Vivekananda Cultural Centre has also been organising a series of virtual yoga demonstration classes and lecture series on the benefits of yoga in the current context.  In addition, the Cultural Centre is also organising an online yoga quiz for yoga enthusiasts. VNS

HCMC – Vietnam’s Covid-19 cases soared to 12,424 with 121 fresh cases confirmed by the Ministry of Health this afternoon, June 18. The new infections included two imported cases and 119 locally-infected ones.

HCMC remains among the biggest coronavirus hotspots as it accounted for half of the country’s domestic infections, at 59. Bac Giang recorded 36 cases, Binh Duong 12, Bac Ninh 10, Hoa Binh one and Lao Cai one.

Thai Nguyen City in the northern province of the same name recently announced that a local woman in Phan Dinh Phung Ward tested positive for the coronavirus last night, the local media reported.

Earlier, she underwent a mandatory 21-day quarantine in the Mekong Delta province of Tien Giang and tested negative for the virus three times, with the third test’s result coming out on June 13.

After her arrival in Hanoi, she returned to her home in Thai Nguyen on a car and then a motorbike taxi. She declared her health status at a medical station in Phan Dinh Phung Ward and was asked to self-quarantine at home for another seven days.

However, on June 15, she visited a Viettel store and an Agribank branch in the city. She also went to a supermarket the following day.

On June 17, she tested positive for the virus and was sent into quarantine.

The local authorities then locked down her place of residence, quarantined the neighboring areas, and conducted contact tracing. As of last night, they found 43 people coming into close contact with her and placed them in quarantine.