At the third consultative conference, the Presidium of the Vietnam Fatherland Front Central Committee approved a list of 205 qualified people from central agencies, organizations and units who were nominated for the election of the 15th National Assembly.

The list is divided into groups, with 11 candidates in the Party agencies, three in the assistant agencies to the State President, 15 in government agencies, 130 in National Assembly-related agencies, 14 in the armed force, 29 in agencies under the Vietnam Fatherland Front and social unions. Among them, there are 16 members in the Politburo and 4 members in the Central Party Committee’s Secretariat.

The 16 Politburo members include:

General Luong Cuong, Chairman of the General Department of Politics of the People’s Army of Vietnam

The four members of the Secretariat include:

The 15 candidates from government agencies: 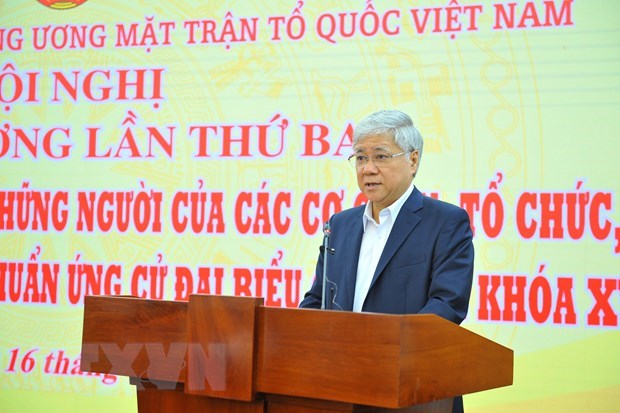 President of the VFF Central Committee and Vice Chairman of the National Election Council Do Van Chien speaks at the third consultative conference in Hanoi on April 16 (Photo: VNA)

Hanoi (VNA) – The third consultative conference held by the Presidium of the Vietnam Fatherland Front (VFF) Central Committee in Hanoi on April 16 adopted a final list of 205 eligible candidates nominated by central agencies and organisations for the upcoming election of deputies to the 15th National Assembly . National Election Council (NEC) Do Van Chien said the second consultative conference on March 19 compiled a preliminary list of 205 candidates nominated by central agencies for the 15th NA election.

The list was approved by all 55 delegates present at the conference.

The Hanoi VFF Committee reported that the second consultative conference passed an initial list of 188 candidates, but 24 candidates later withdrew and two others received less than 50 percent of confidence votes at meetings of voters in their neighborhood.

Among the remaining 162 candidates, 63 are women, four are of minority ethnic groups, 23 are not members of the Party, and 35 are under 40 years old.

When the list was submitted to the third consultative conference, it was agreed that the two candidates with the least votes would be removed, hence the official list of 160 candidates.