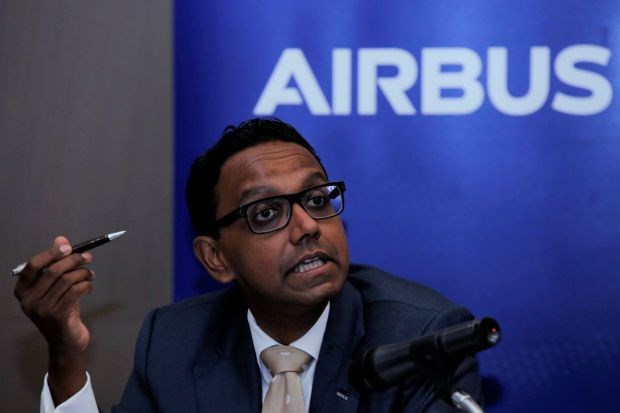 On the global front, he said Airbus sees the recovery in activities picking up very quickly, especially in certain countries such as China, India and the US.

After the domestic travel resumes, he encouraged the opening of international borders, at least at the ASEAN level, in order for the regional traffic to start recovering quickly, followed by the intercontinental or long-haul routes.

Airbus is committed to expanding its presence in Malaysia and is looking at industrial exposure beyond the recent pre-pandemic level of 400 million USD a year.

Malaysia is Airbus’ largest supplier base in Southeast Asia and the third largest in Asia after China and India. Airbus delivered 566 units of commercial aircraft in 2020./.

The PM assigned the Aviation Corporation of Vietnam (ACV) to undertake the project with a total investment capital of VND1.547 trillion.

Under the proposal, the 67-year-old airport will be upgraded to receive large aircraft such as Airbus A320s & A321s and those of equivalent rank, as opposed to ATR72s at present.

It aims to raise its design capacity of serving half a million passengers when the upgrade is scheduled to be completed by 2024.

Located just four km away from Dien Bien city centre, Dien Bien Phu airport, also known as Muong Thanh airport, is the largest and the only commercial airport in the north-western region of Vietnam.

At 5 am on April 2, the A320NEO, which was delivered from the Airbus factory, landed on the runway of Noi Bai International Airport and officially joined the Bamboo Airways fleet. This is the third aircraft that Bamboo Airways has added to its fleet since the beginning of the year.

Inheriting features from the A320 family, the Bamboo Airways Airbus A320NEO is equipped with the new generation of Leap-1A engine from CFM, reducing up to 15 per cent fuel consumption. Besides, the outstanding design also helps this series to mitigate noise and gas emissions into the environment.

With the aim of providing passengers “more than just flight” experiences, Bamboo Airways optimised the interior design of the A320NEO’s cabin which is 27.51 metres in length and 3.7 metres in width. The airline reduced the number of seats from a maximum of 194 to 170 seats for passengers’ comfort and convenience with more space for sitting, leaning back, and larger aisle area in the cabin. This adjustment also reduces the time needed to arrange luggage when boarding.

The interior of the Bamboo Airways Airbus A320NEO cabin has grey as the main colour, creating a sense of luxury and comfort. The seats are manufactured by Collins Aerospace – a famous US aircraft interior furniture manufacturer. The aircraft also has a built-in Panasonic Wi-Fi system, allowing passengers to optimise the experience, access information, and in-flight entertainment services.

As soon as the A320NEO landed at Noi Bai Airport, Bamboo Airways A320NEO was sprayed with disinfection solutions of international standards to ensure absolute safety for customers and flight crews before being put into service.

After the arrival of the Airbus A321 at Noi Bai International Airport on February 7, the A320NEO is the second narrow-body A320 family aircraft that Bamboo got in just one month. This vividly demonstrates that Bamboo Airways is increasingly approaching its target, expanding its fleet size to at least 40 aircraft this year. Two new Airbus A321NEO, A320NEO, and one advanced Embraer received in January will help Bamboo Airways complement material sources and increase capacity on domestic routes.

Thus, Bamboo Airways will operate an A320/A321NEO fleet of 11 aircraft, in addition to the wide-body Boeing 787-9 Dreamliner aircraft for long-haul routes and advanced Embraer 190, 195 jet aircraft. A Bamboo Airways representative said the company will continue to promote activities to increase the total fleet size to 100 aircraft by 2025.

The addition of Airbus A320NEO aircraft by Bamboo Airways affirms the airline’s continuous efforts to expand the fleet size, promote domestic and international destinations, and contribute to economic recovery and growth after the COVID-19 pandemic. This goal is regarded as a remarkable highlight in the context of many airlines around the world struggling to reduce the number of aircraft to cope with the epidemic.

In Vietnam, the COVID-19 epidemic is stably controlled across the country, which plays an important role in reinforcing passengers’ belief. The number of passengers who travel out of airports in general and use Bamboo Airways services has been increasing rapidly before the upcoming Liberation Day and International Workers’ Day (April 30 and May 1).

Bamboo Airways’ representative said the fledging airline received seven out of seven stars for prevention of COVID-19 as well as absolute aviation safety. As of March 2021, the total number of flights and passengers served by Bamboo Airways was nearly double compared to the same period in 2020.

China showcases its fighter jets two days after the US rejected Beijing’s claims in most of the South China Sea.

China has sent at least eight aircraft to Vietnam’s Hoang Sa (Paracel) archipelago in the South China Sea, two days after the US rejected Beijing’s claims in most of this sea.

Evidence from satellite imagery has emerged that China has deployed fighter jets to its key military base on Paracels, foreign media has reported.

Being shown on the runway at Woody island, the jets are believed to be J-11B and J-11Bs that are in service with the People’s Liberation Army Air Force (PLAAF) and Naval Aviation Force (PLANAF), RFA reported.

According to Forbes, these are broadly equivalent to the F-15 Eagle used by the US Air Force.

The timing of the deployment could relate to a number of external factors. It may related directly to Secretary of State Mike Pompeo’s statement. It is also a day after a US Navy destroyer, the USS Ralph Johnson, performed a freedom of navigation operation in the area and a week after a major international naval exercise involving two US Navy aircraft carriers, Forbes said.

Either way it may be intended to send a message, or even as a hedge against military action, Forbes said, adding that it is also set against a large US-led naval exercise and rising tensions across the region generally.

China occupied Vietnam’s Hoang Sa in a bloody battle in 1974. In recent years, China has beefed up the facilities and has deployed fighters and bombers there previously.

In 2012, China set up administration city of Sansha on Woody island or Phu Lam island in Vietnamese name. Since then, Beijing has boosted activities on the island by holding tours there and calling for investment into the seized islands.

In April 2020, China decided to establish two new administrative districts namely Xisha and Nansha that are under management of Sansha.

In a statement released on January 12, the European Commission expressed its regret over the US’ decision to impose new tariffs on further EU products. It added that it is looking forward to engaging constructively with the new US administration to resolve this long-lasting dispute as part of a renewed transatlantic agenda.

The statement was made immediately following the Trump administration’s announcement of additional tariffs on a range of EU exports to the US. According to the Office of US Trade Representative, tariffs of 15% and 25% will be levied on aircraft components and some types of alcoholic drinks, respectively.

The new wave of tariffs is Washington’s latest move in a 16-year spat over subsidies for aircraft manufacturers Airbus and Boeing that turned increasingly sour under US President Donald Trump.

The tariff war has become more tense since October 2019 when a WTO ruling allowed the US to impose tariffs on EU goods worth US$7.5 billion each year. The figure is based on the estimated damage caused to the US due to EU subsidies for Airbus. With the greenlight, the US then imposed high tariffs on a range of EU goods, including aircraft parts and alcoholic drinks.

One year later, the WTO issued another ruling but in the EU’s favour. Accordingly, the EU is permitted to impose tariffs on US goods and services worth US$4 billion each year, equal to the damage to the EU as a result of US subsidies for Boeing. Earlier, the US and the EU had been on the brink of a trade war in 2018 when the US levied tariffs on EU aluminium and steel. In retaliation, the EU made a long list of US goods subject to high tariffs when imported to the bloc.

In recent years, the US-EU alliance has faced constant tensions due to disagreement on various issues, from security, climate to technology, and especially trade. Long-standing disputes and tit-for-tat tariffs threaten to destroy transatlantic trade relations, with two-way value estimated at US$1,300 billion. Escalating trade conflicts have also undermined the confidence and activity of investors and businesses, posing risks to the financial market as well as the economies of both sides and the world at large.

Aware of the fact that there is no winner in a tariff war, both the EU and the US wish to negotiate. In July 2018, the two sides agreed to a truce and started negotiations on a new bilateral trade agreement. But waves of tariffs on each other’s goods have continued to throw both sides into disagreement. Both the EU and the US have announced that they are willing to engage in talks, but no considerable concessional moves have been made.

The US now has a new administration and President-elect Joe Biden conveyed a message of change, in which he shared that US protectionist policies and moving away from multilateralism and global cooperation can be reversed. Along with the EU’s statement on the desire to look for a truce agreement on trade with the US, hopes of a positive transatlantic agenda have flared up.

Hanoi (VNA) – National flag carrier Vietnam Airlines will operate up to 34 flights per day on the Hanoi-HCM City air route , equivalent to over 12,000 seats, the highest number among Vietnamese airlines .

All flights on the route connecting the country’s two leading economic hubs will use wide-body aircraft Airbus A350 and Boeing 787 since March 28, a representative of the airline said. The carrier is also the one having the most frequent use of the twin-aisle aircraft on the route.

The airline will use the narrow-body Airbus A321 airplane only for flights in early morning or late evening.

Vietnam Airlines has seriously observed COVID-19 prevention and control measures, such as asking passengers to make medical declarations, checking their body temperature, and providing them with hand sanitiser.

According to the Centre for Asia-Pacific Aviation (CAPA), the Hanoi-HCM City is the world’s second busiest route in terms of seat capacity, just after Seoul-Jeju in the Republic of Korea./.