In the first quarter financial result, Vietnam National Petroleum Group (Petrolimex, PLX) posted a slight fall of 0.6 percent in net revenue to nearly 38.2 trillion VND (1.6 million USD). However, it was still profitable thanks to a cut in expenses in financial activities and others, and gains in other incomes.

During the period, Petrolimex’s domestic output rose 4.7 percent year-on-year to 2.27 million m3. Retail sales accounted for 55 – 60 percent of its total sales but contributed around 80 percent of its profit.

SSI Securities Corporation (SSI) said that the company’s production growth will continue until the first half of the second quarter, boosted by the Government’s restriction on illicit petrol, especially in the south.

The main driving force for the recovery in profit was higher crude prices in the international market and crack spread of gasoline products.

Crack spread is the spread created in commodity markets by purchasing oil futures and offsetting the position by selling petrol and heating oil futures.

Another company witnessing profit rise sharply was Nam Song Hau Trading Investing Petroleum JSC (PSH). The company’s revenue was up 10 percent over last year to more than 1.7 trillion VND, resulting in a profit of 44 billion VND, 2.1 times higher than that of the same period in 2020.

Even though there were still some companies recording declines in profit or even losses during the first quarter, in general, oil and gas companies’ results were quite positive.

With positive oil demand outlook, the oil price is expected to continue to rally. Therefore, there is still more room for oil and gas firms to recover.

According to SSI, developed economies are gradually opening again as they have pushed the vaccination rollout. Businesses activities will also recover quickly when countries continue to ease measures to contain COVID-19. 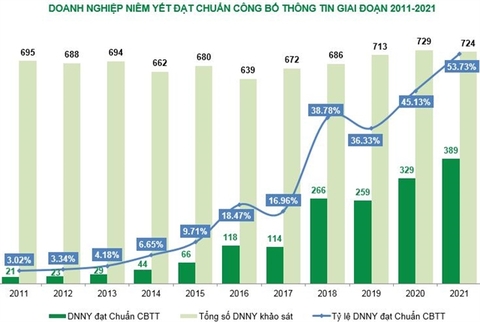 Over 53 per cent of companies listed on the Ha Noi and Ho Chi Minh stock exchanges meet all information disclosure requirements, according to a survey conducted for the 2021 IR Awards.

It surveyed 724 of the 749 companies listed on the bourses.

Of the 389 listed companies that fully complied with the obligations, 30 firms are in the large-cap segment (accounting for 68 per cent of all enterprises in the segment), 111 in the medium-cap segment (63 per cent) and 248 in the small and micro cap segment (49 per cent).

Information disclosure is a mandatory obligation for all listed companies on the country’s two stock exchanges not to speak of their responsibility to shareholders, and investors in general.

The survey was based on regulations prescribed in Circulars 155 and 96 on information disclosure issued by the Ministry of Finance in 2015 and 2020 and other regulations from regulatory agencies.

The annual survey indicates that the percentage of companies meeting disclosure requirements is growing steadily.

This is the first year that the number of companies complying with requirements is over 50 per cent.

This growth is also key to developing the stock markets in a sustainable and transparent.

The IR Award programme is organised by Vietstock and Finance and Life online newspaper FiLi.vn published by the Viet Nam Association of Financial Executives.

The annual awards seek to raise awareness among listed companies of the need to comply with disclosure requirements and to have good relations with investors and shareholders. — VNS 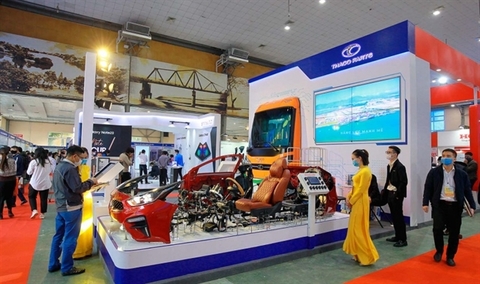 The Viet Nam International Expo on Support Industries and Processing – Manufacturing (VIMEXPO 2021) is scheduled to take place from October 27-29 at the International Centre for Exhibition (ICE) in Ha Noi.

The upcoming event, which will be the second held under the Support Industry Development Programme, will comprise nearly 300 booths.

Hosted by the Industry Agency under the Ministry of Industry and Trade, VIMEXPO 2021 offers a chance for supporting industry enterprises to share experience, seek new partners and suppliers and learn of new technologies. The three-day expo hopes to welcome 20,000 visitors.

The previous edition comprised 250 booths from 170 enterprises on a display area of 5,000sq.m.

The Government has issued a resolution on measures to promote the development of support industries, which sets a target of Viet Nam producing highly-competitive support products that meet 45 per cent of domestic production and consumption demand by 2025 and 70 per cent by 2030. — VNS

The meeting was chaired by Deputy Prime Minister Vu Duc Dam, who is also head of the steering committee.

The standing board agreed on specific instructions to create favourable conditions for local authorities and businesses to access and purchase vaccines and quickly transport them to Vietnam.

The Health Ministry will work with authorized suppliers and Ho Chi Minh City’s administration on the city’s needs for vaccines.

Localities and businesses must be cautious when seeking vaccines to avoid the case when the manufacturer commits to selling them but deliver in 2022, not in this year.

The standing board urged the Health Ministry to early issue a document on extending the groups prioritized to receive vaccination, while preparing for launching the free-of-charge expanded vaccination drive and on-demand paid vaccination service after completing inoculation for priority groups.

Participants agreed to create the best possible conditions for the trial of homegrown vaccine. If the trial goes well, in the context of vaccine scarcity the Ministry of Health will submit to competent agencies for approval for use homegrown vaccines in emergency circumstances.

The Ministry of Health will coordinate with ministries and sectors to submit to the Government a proposal on accessing all vaccine supply sources in the world towards the goal of achieving herd immunity by the end of 2021, and create mechanisms to facilitate investors’ investment in the production of vaccines in the country to serve not only domestic use but also export.

The health ministry reported that in the coming time, along with Pfizer vaccine already bought, Vietnam is expected to receive a number of vaccines that have been approved for emergency circulation by the World Health Organisation.

It has scalable charging power and dynamic power sharing. A perfect fit for any cityscape, it is suited for highway and urban charging stations, city parking, as well as shopping malls.

“Public fast charging networks are an essential factor in driving a sustainable future in e-mobility in Asia-Pacific. By ensuring that charging is as effortless and as fast as people need it to be, we are making electric vehicles a viable option for more people. In addition, the SICHARGE D’s upgradeable and scalable fast charging technologies allows e-charging service providers and electric vehicle users to expand their investments step by step,” said Siddhant Gupta, head of Future Grid for Siemens in the Asia-Pacific.

Featuring best-in-class technology, this smart charger is the winner of the world-renowned iF DESIGN Award 2021 in the categories of User Interface (UI) and Service Design.

For an improved user experience, an integrated 24-inch adjustable display allows SICHARGE D to be operated barrier-free and opens new opportunities for customers to use this flexible screen for tasks beyond interfacing with the charging process such as digital menu boards, information kiosks or outdoor advertising.

The sleek and compact SICHARGE D has a scalable charging power from 160kW up to 300kW, either from the start or through plug-and-play upgrades. Furthermore, the charger supports voltages between 150 and 1,000V and currents of up to 1,000A across all DC outlets. This enables full power loads for future vehicles as well as the lower voltage charging rates demanded by today’s mainstream vehicles.

Additionally, SICHARGE D can be configured with either a CCS2 (Combined Charging System) or a CHAdeMO connector cable with varying capacities of up to 400A or a 500A liquid-cooled system.

With a constant efficiency of above 95.5 per cent and a peak efficiency of 96 per cent, the new SICHARGE D ensures that almost all the generated electricity reaches the car to be charged.

For charging service providers and electric vehicle users, this means reduced operational costs. In addition, the charger allows an easy upgrade of charging power to meet future technological developments: Even if the charging capacities of most electric vehicles are still limited today, they will be able to accept higher charging power in the future and demand higher voltage ranges.

Although the number of electric vehicles is growing, today’s investments in infrastructure are challenging. With SICHARGE D, charging service providers and electric vehicle users will be able to time their investments according to market demands as the option to expand the charger with up to two external dispensers to charge up to five cars in parallel will be possible in the future. The standard configuration will have two DC and one AC outlet housed in a compact design to optimise parking spaces.

The new charger combines all these features with dynamic parallel charging. That means, it accounts for the individual power demand of each connected car and automatically adapts the charging process to the electric vehicle’s battery technology and charging status. This optimises charging time as the connected cars get the maximum power they need without any additional manual intervention.

To ensure maximum uptime and highest availability of the charger, digital connected services is included in individual service contracts with customers. These services range from preventive and corrective maintenance, remote firmware updates, spare parts, support, and consulting, as well as training.

Siemens, which makes products ranging from trains to factory equipment, said in a statement that it booked bottom-line net profit of 2.4 billion euros ($2.9 billion) in the period from January to March, up from 697 million euros a year earlier.

“As our order intake and revenue in the second quarter impressively demonstrate, our customers place great trust in us,” said chief executive Roland Busch.

“Growth momentum came, in particular, from the automotive industry, machine building, our software business and -– from a geographic perspective –- from China,” Busch said.

“On this basis, we are even more confident about the second half of our fiscal year and are raising our guidance significantly,” said chief financial officer, Ralf Thomas.

Siemens said that although it continued to “a complex macroeconomic environment influenced by Covid-19, we expect our businesses to continue to deliver a strong performance in the second half of fiscal 2021.”

Full-year revenue was projected to grow by between nine and 11 percent,

“In line with the results already achieved during the first half of fiscal 2021 and the expectations described above, we raise our outlook for net income to the range from 5.7-6.2 billion euros”, well above the previous projected range of 5.0-5.5 billion euros, the statement said.