The event was held as part of the Chinese minister’s visit official visit to Vietnam and attendance at the 6th Greater Mekong Sub-region Summit (GMS-6) from March 30 to April 3.

During their conversation, Minh asserted that the Vietnamese state and government always focus on the development of comprehensive strategic cooperative partnership with China.

They also support the settlement of existing problems to maintaining the stable and positive development of bilateral relations.

He asked Beijing to provide favorable conditions for Vietnamese products to enter the local market, and to develop bilateral trade in a balanced and healthy manner.

Minh expressed his concern over potential factors that can intensify tension in the East Vietnam Sea, stressing that the legitimate rights and interests of Vietnam should be respected in accordance with the 1982 United Nations Convention on the Law of the Sea (UNCLOS).

Both parties should implement the common perceptions reached by their leaders and the Vietnam-China agreement on fundamental principles guiding the settlement of sea-related issues, while persistently resolving disputes in the maritime area via peaceful measures.

They should manage maritime disputes without taking any actions to complicate the situation, thus maintaining peace and stability in the East Vietnam Sea, Minh asserted.

Replying to his host, Minister Wang stated that China is willing to work with Vietnam to increase strategic exchanges and political trust, deepen cooperation, and properly address disputes, for the benefits of both nations and peace in the region.

The forecast direction of typhoon Surigae. (Photo: The National Center for Hydro-meteorology Forecasting)

o N, 127.6 o E, 420km East of the Central Philippines. It is moving slowly Northwestward, but is forecast to continuously change its direction.

In the direction document sent to coastal provinces from Quang Ninh Province to Ca Mau Province, the Standing Committee of the Central Committee for Natural Disaster Prevention and Control requested that concerned regions closely monitor warnings for this typhoon, timely notice all fishermen on duty on the East Sea to seek proper protection, and be ready to rescue those in need.

In related news, the Standing Committee of the Central Committee for Natural Disaster Prevention and Control sent a document to its members in the mountainous provinces of the North and North-Central regions regarding the Prime Minister’s instruction on overcoming difficulties after flooding there.

Accordingly, the localities are asked to aid residents in accommodation repair, sanitation recovery, and business manufacturing, business restoration. They are also urged to search for missing people, visit families with fatal victims, closely monitor warning news and weather forecasts to timely deliver instruction to the local in order to minimize damage caused by flooding, landslides, and mudslides.

PANO – In 1972, the situation in the USA was so disorderly and the war in Vietnam plunged the USA into a serious socio-economic crisis with a high rate of unemployment and deep internal contradictions. Meanwhile, explicit and implicit struggles between the Vietnamese Government and US Administration inside and outside the Paris Talks remained fierce through August, September and October 1972.

On October 8th, 1972, the Vietnamese side proposed a draft Agreement, which all sides accepted and agreed to initial in Hanoi on October 22nd, 1972 and October 31st, 1972.

However, in December 1972, the Peace Talks reached an impasse. In an attempt to reach an agreement that would allow US troops to withdraw from the war with “honour”, US President Nixon threatened to launch a large destructive bombing campaign against the North of Vietnam. Yet, after the US unilateral postponement of the signing of the draft Agreement, pressure from the US Congress and people on Nixon and his Administration increased, leading to deep differences among the US Legislature, Enforcement and Justice.

At the Paris Talks, the Vietnamese side strongly reacted to the US decision. Under these circumstances, President Nixon ordered the bombing campaign, named Linebacker II, to be carried out against the North of Vietnam, in an attempt to influence the result of the Paris Peace Talks in his favour.

Nixon took a risk with this decision, as he obviously knew his action would face strong domestic and international protest. However, he and his Administration considered that they should use B52s to extensively bomb Hanoi and northern seaports in an effort to change some terms in the draft Agreement, to annihilate key Vietnamese projects in the North and to demonstrate their air power, threatening to use it again in case the Sai Gon regime were in danger in the future. Nixon also wanted to send Vietnam and the world a message “The USA does as it says!”

During the 12 days and nights of the US bombing operations, as many as 20,000 tonnes of US bombs were dropped on Hanoi and Hai Phong, and the US Air Force could mobilize an unlimited number of its B52 strategic bombers for the first time in a campaign. According to US military experts’ estimates, US air operations could reduce northern Vietnam’s residential hubs and military targets and Hanoi and Hai Phong (the two most important cities in the North) into piles of debris. In his book “Vietnam Verdict: A Citizen’s History”, Joseph A. Amter wrote that the bombing operations on Hanoi and Hai Phong were the most cruel in the Vietnam War’s history.

When the operations started, reporters from the western press and media and photographers flocked to Hanoi. Some reporters often received information from SAC and Pentagon. But what they reported from reality showed the Americans and people around the world the most terrifying and dirtiest bombing operation, where they used B52s to carpet bomb Hanoi, Hai Phong and other localities in the North of Vietnam.

The cruel US air operation deeply touched people around the world. International opinion strongly rejected the action of the US Administration. People, including leaders of countries and organizations, politicians, artists, scientists, ordinary people, as well as US allies and Americans, voiced protests against the US and advocated for Vietnam.

ITASS announced that the Soviet people strongly denounced the new aggressive acts of the invaders, asked them to immediately halt their actions and quickly returned to the Paris Peace Talks to sign the Agreement, ending the war and restoring peace in Vietnam.

At the same time, the Chinese Foreign Ministry stated that if the US Administration bypassed the peace desire of the Vietnamese people, the Americans and other peoples across the world and pursued aggressive war, the Chinese people would persistently carry out its international duties and mobilize efforts to back the Vietnamese national resistance war against the American invaders to the final victory.

Other governments around the world also voiced serious accusations regarding the large-scale devastating bombing operation that Nixon was carrying out in an attempt to force Vietnam to accept their irrational conditions, permanently dividing the country and maintaining the puppet Government in the South. US Communist Party General Secretary Gus Hall underlined that the second US bombing operations resulted in US prestige around the world dropping to the lowest-ever level.

In France, demonstrations supporting Vietnam took place in many major cities. The French Communist Party continuously made speeches on T.V. channels praising the just war of the Vietnamese people against the US invaders. French leftist newspapers disclosed the US real plot, the dishonesty of Nixon, saying that in spite of any explanations, they could not defend their continuous and extensive massacres. One daily even declared that anyone who wanted to lessen Nixon’s sin was his follower.

In Austria, the Austrian Social Party strictly asked the US Administration to immediately end the people-killing bombing operations on a small country and sign a cease-fire agreement.

In Italy, Dante Cruych, a member of the local government of Bologna sent a confidential letter to representatives of the Vietnamese Government at the Paris Peace Talks, saying that they were always on the Vietnamese side, even in such a terrible time. He reported that tens of thousands of Italian people went out to protest under heavy rain. “The great Vietnamese nation is always in our hearts,” he concluded.

The US crimes and their swindle continued to be unveiled, resulting in international opinion taking the side of Vietnam against the USA. 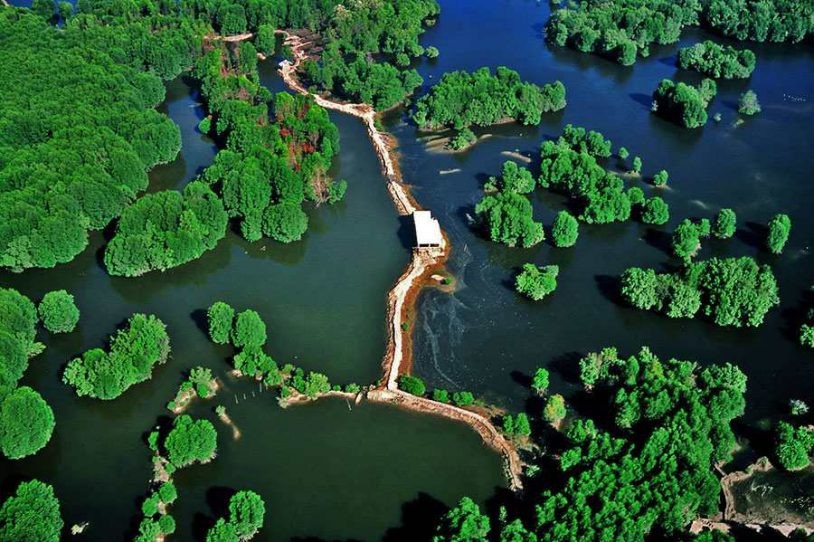 Since the advent of the city’s first metro line in 2012, its real estate market has witnessed large investment waves, wooing more investors, and boosting the land prices accordingly.

Infrastructure upgrades have also received adequate attention from investors, the People’s Committees of the city and Thao Dien Ward.

Hanoi Highway is one of the key projects to be upgraded from eight to 16 lanes, with a total length of 15.7 kilometers, starting from the ramp of Saigon Bridge 2 to the adjoining point of new Dong Nai Bridge. This route is the main gateway to the city, connecting metro line no. 1, leading to major ports like Cat Lai, Long Phuoc, and to the East depot.

Ben Thanh – Suoi Tien Metro Line is the first urban railway project in Ho Chi Minh City with a total investment of VND43,700 billion. The route has 14 stations (including stations at Van Thanh, Saigon Bridge, An Phu, Thu Duc, High-Tech Park, the East depot and Thao Dien) and a depot house. It is anticipated to be in commercial operations in 2022, after its scheduled test run in the fourth quarter of this year.

The upcoming completion of the metro project has caused house prices on the secondary market in this area to soar. In the period 2015-2020, sales prices for luxury apartments on the primary market in District 2 increased by an average 7.3 percent per annum, exceeding the average growth rate of the entire market, and likely to rise even further. Since 2018, house prices on the secondary market went up remarkably, up to 25-75 percent higher than the starting sales prices, according to CBRE.

With the fast growth rate of supply and demand, Thao Dien’s land fund is inevitably running out. Scarcity has dramatically upped the value of existing real estate and emerging projects. Lumière Riverside has captured great interest on the primary market as it is developed by Masterise Homes, the investor of the well received high-end projects such as Masteri An Phu and Masteri Thao Dien, in the quest to form an elite, debonair community in the region.

With a broad vision and experience from international partners, Masterise Homes has all its apartments facing the metro line installed with a special glass door system comprised of two soundproof and vibration-resistant layers. This is one of the first luxury complex projects in Ho Chi Minh City to incorporate such high-end construction technology for future residents’ refined living experience and ultimate contentment.