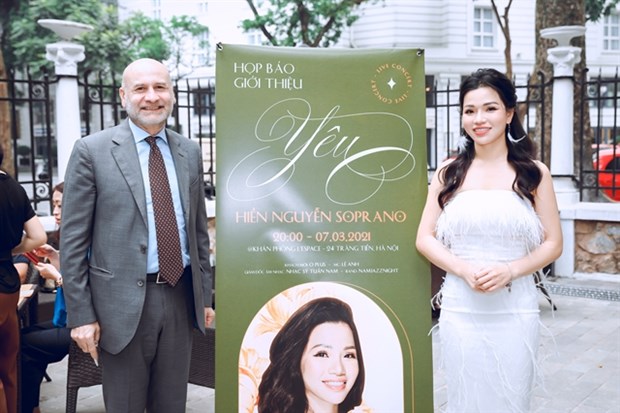 Hanoi (VNS/VNA) – Despite facing many difficulties caused by COVID-19 pandemic, Vietnamese soprano Hien Nguyen will have her debut concert in Hanoi next month.

Entitle Yeu (Love), the concert will mark her 15-year professional singing career after she became a student of the Vocal Faculty at the National Academy of Music .

“Love is not only about affection between man and woman, it’s about a positive attitude for every single moment of the life that you are living. I just want all people to know how to appreciate all the small joy and happiness that they have,” the singer explained about the title of her concert during a press conference at the Casa Italia restaurant in Hanoi recently.

The singer, who spent three years working in Italy, said many of her friends and family were worried about her decision to hold a concert amid the pandemic.

“While some of them tried to convince me to change my mind, some say that I am brave. The passion for singing burns in me. I want to be on the stage to sing to fulfill my dreams. That’s why I will stick with my decision. Only a governmental decision on social distancing and the cancellation of performances can force us to postpone our event,” the 33-year-old said.

The soprano said she has nurtured the idea for the concert after her second video music Thank God It’s Friday which was released at the end of 2019.

“To nurture the idea to have my first concert I have worked crazy hard to accumulate money for this ‘milestone’,” she said.

In the concert, Hien Nguyen will present a repertoire featuring world-famous classical songs and Vietnamese ballads which will be presented in a very fresh way. All the songs have been re-arranged in a semi-classic and jazz style by musician Tuan Nam and his jazz band.

“My goal is to present music in a fresher way which can help to access to everyone. Coming back from Italy, I realised that classical music is still challenging for most Vietnamese people. With everything I’ve learnt in Italy, I want to diversify the way to perform classical music. This is not only my method to create my own style, but also to access more audience,” the singer explained.

In addition, the soprano will perform together with the four-member boyband Oplus as guest artists.

As Italy has played an important role in her career, Hien Nguyen will also perform songs in Italian, including Parla Piu Piano – the Italian version of the song Speak Softly Love which was written for the movie The Godfather.

Attending the press conference, the Ambassador of Italy to Vietnam, Antonio Alessandro, said “I’m happy to see Hien Nguyen reaching a new height in her career with her upcoming live show. She is evidence of the successful cultural co-operation between Italy and Vietnam.”

While studying at the Vietnam National Academy of Music (VNAM) and the University of Foreign Languages and International Studies, in 2012, Hien Nguyen won a scholarship to study Italian language and culture at the University for Foreigners Perugia in Perugia, Italy.

A year later, she was the only graduate of VNAM to win a scholarship from the Milan Conservatory where she studied for two years.

Returning to Vietnam in early 2015, she focused on her own family before coming back to the spotlight in 2018.

Each part of the book not only introduces readers the beautiful natural landscape, unique culture and rich cuisine, but also depicts the friendly and peaceful lifestyle of local residents.

In addition to useful information, the book also attracts readers with vividly beautiful images that are captured by professional photographers.

The Vietnam National Administration of Tourism expects this useful and well-prepared publication will help travelers to map out their itineraries when visiting Vietnam.

The Hanoitimes – Medical declaration will be used merely for the prevention and control of the Covid-19 epidemic.

Vietnam will require all residents to make compulsory medical declaration from March 10 in an effort to curb the outbreak of the new coronavirus (SARS-CoV-2).

The declaration will contribute to the national combat against the Covid-19 epidemic, Deputy Prime Minister Vu Duc Dam, head of the National Steering Committee for Covid-19 Prevention and Control, said at a meeting on Sunday morning.

Health information will be used merely for the prevention and control of the epidemic, according to the committee.

The Ministry of Information and Communications, the Ministry of Health, Vietnam Social Security, and IT agencies will assume responsibility for the implementation.

So far, Vietnam has required compulsory medical declaration for all people coming to the country. But the move is not enough when the country has already entered the second phase of the battle against the epidemic, the deputy PM said, noting that this phase is much more severe.

Compulsory health declaration is required after a Vietnamese woman ignored the request when she returned to the country from a European trip that included a visit to Lombardy, an epicenter in Italy.

After she tested positive with the new coronavirus on March 6, Vietnam found 13 more cases within two days, including 10 on the same Vietnam Airlines flight as her.

Vietnam has identified crew members and passengers of the flight and applied quarantine and medical check.

Deputy PM Vu Duc Dam predicted that the number of infection cases will continue rising in the days ahead.

The northern province of Quang Ninh has become the first locality to require the health declaration. Since March 8, around 300,000 residents in Ha Long city have filled out medical inquiries after four foreign visitors got infected with the virus. The visitors were on board the same plane from London to Hanoi as the woman who was the first infected case of Hanoi.

The Hanoitimes – On the occasion of the International Women’s Day on March 8 and International Day of Happiness on March 20, Vietnam National Village for Ethnic Culture and Tourism will run a series of activities themed “Little Spring” for the whole month.

The event themed “the Spring in the Muong Village” features an artistic show of Muong ethnic dances and songs; an ethnic gastronomic demonstration with dishes prepared from Ban Flower (Bauhinia) and a photo exhibition of beautiful girls from Thai ethnic group with Ban flowers.

At the exhibition “Our homeland’s islands”, visitors will watch photos, documentary films and artifacts related to the sea and islands of Vietnam, especially the Truong Sa and Hoang Sa (Paracel & Spratly) islands while at the music show titled  “Love Songs from the Sea”, they will be told about the lives of the marines, their bravery and willing to sacrifice for Vietnam’s territorial water protection.

On weekends, there will be a cultural event called “The Central Highlands in March – I’m the P’lang flower”, including songs and dances on the spring, which praise the beauty of nature, culture and people of the Central Highlands.

In addition, spring festivals,  homestay travel programs, culinary experiences, and folk games will also be held on weekdays and weekends to introduce the culture and customs of the 54 ethnic groups of Vietnam.

These cultural activities are aimed at promoting cultural exchange among ethnic groups in Vietnam as well as attracting more tourists to the National Village for Ethnic Culture and Tourism.

The Hanoitimes – Ethnic groups in northeast mountainous area will showcase their colorful vibrant rituals at the festival.

On the occasion of the New Year’s Eve 2021, the Vietnam National Village for Ethnic Culture and Tourism will hold a special cultural exchanged program, taking place from December 31 to January 3, 2021.

Themed “Spring in mountain markets”, the cultural village will be divided into different spaces, including the one for purchasing and exchanging goods   among ethnic groups, an entertainment space where folk performances and games are organized; and a culinary area which serves dishes and products of the Mong, Ha Nhi and Lu ethnic groups.

During the three days of this cultural festival, ethnic minorities groups will introduce their unique colorful festivals and rituals imbued with their identities to visitors.

The Lu ethnic people in Lai Chau province will re-enact the Cam Muong festival,  praying the Gods of river, mountain and stream for bumper crops and good lucks to all villagers. Lu people often lives along rivers and streams in the mountainous regions of the northern part of Vietnam. They have the custom of dyeing teeth black and learnt the technique of wet-rice cultivation for very long time ago.

The Ha Nhi ethnic minority in Dien Bien province will perform the customs of the ‘Khu su cha’ Tet. This Tet ritual is usually celebrated by the Ha Nhi – La Mi ethnic people in the “dragon day” in the last month of the lunar year; meanwhile, the Ha Nhi- Co Cho organizes their own Tet three days earlier, on the “tiger day” of the same month.

In addition to the spring market space, there is also a photo exhibition themed “Spring in mountain markets” showcasing beautiful landscapes and cultural traits of ethnic minority peoples in mountainous area of Lai Chau, Dien Bien, Bac Kan; as well as some typical photos of the last festivals that were organized at Vietnam National Village for Ethnic Culture and Tourism.

Especially, the organizing committee will introduce to the public the folk performing arts of Khen dance – the national intangible cultural heritage of the Mong ethnic group in Bac Kan province.

The country’s pandemic hotspot Hai Duong in the north hosted eight of the total new cases, while the remaining five, all Vietnamese nationals, were imported and quarantined upon arrivals in the Mekong Delta province of Kien Giang.

The eight infections in Hai Duong are F1 cases of confirmed COVID-19 patients. Six of them have been quarantined since January 28, and the rest since February 28. All are now under quarantine and treatment.

Of the total cases to date, there were 1,550 domestically-transmitted cases, including 857 recorded since the latest outbreak hit Hai Duong and several other northern localities on January 27.

A total 60,693 people who came in close contact with COVID-19 patients or arrived from pandemic-hit areas are under quarantine nationwide, including 560 at hospitals, 12,298 at other quarantine sites, and 47,835 at home.

Among patients under treatment, 66 have tested negative for SARS-CoV-2 once, 37 twice, and 113 thrice.

Vietnam has seen 1,892 recoveries so far, with the death toll remaining at 35.