Participants heard that after the first consultation meeting at the central level, the Vietnam Fatherland Front Central Committee’s Presidium proposed the National Election Council and the National Assembly Committee keep the number of candidates from the front and its members the same as in the previous legislature term to ensure and uphold the role of people’s representatives in the National Assembly.

It also asked for ensuring the percentage of female candidates account for over 35 percent of the total and increasing the number of ethnic candidates.

The Nation Election Council and relevant agencies were asked to direct agencies and organisations at central and local levels to establish election teams (deadline on April 3), and post up the list of voters (deadline on March 14).

Concluding the session, National Assembly Chairwoman Nguyen Thi Kim Ngan asked subcommittees of the National Election Council and related agencies of the government and the Vietnam Fatherland Front to check assigned tasks to prepare for the second consultation meeting.

She also requested to strengthen information dissemination relating to the elections of the 15th National Assembly and People’s Councils at all levels./. 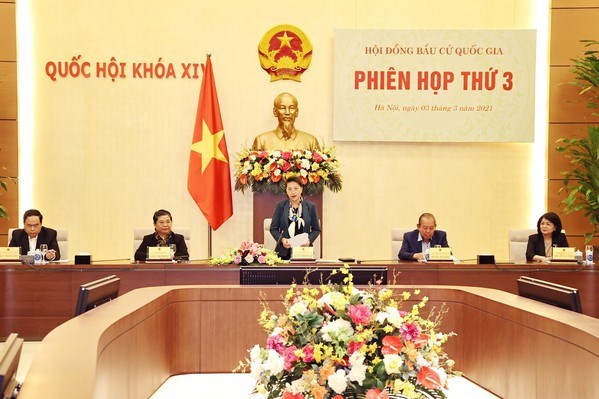 In his report delivered at the meeting, Tran Van Tuy, head of the NA Committee for Deputy Affairs and deputy head of the Sub-Committee for Personnel Affairs said that after the first negotiation, the Presidium of the Vietnam Fatherland Front (VFF) Central Committee has given proposal to the NEC and the NA Standing Committee on the quantity of candidates to the 15th NA from the VFF and its member organisations.

He said that the list has higher numbers of candidates who are non-Party members and those from ethnic minority groups, and at least 35 percent of female candidates.

NA General Secretary, Chairman of the NA Office and head of the NEC Office Nguyen Hanh Phuc said that the NEC and relevant agencies should focus on directing central and local organisations, agencies and units on the introduction of candidates and the organisations of meetings to collect voters’ opinions on the candidates, as well as the formation of election committees at all levels and receiving the nomination documents and making plans on allocating NA deputies from the central level to become candidates in localities.

It is necessary to organise the second negotiation to make a list of candidates, while gathering the ideas of voters in the candidates’ residence, while adjusting the structure, components and number of candidates from central and local organisations, agencies and localities, he said.

In order to keep a close watch on the preparations in localities, Phuc suggested that the NA Standing Committee issue a plan to organise election supervision groups, while continuing to issue guiding documents, dealing with denunciations and complaints related to election, and ensuring safety and orders throughout the election. 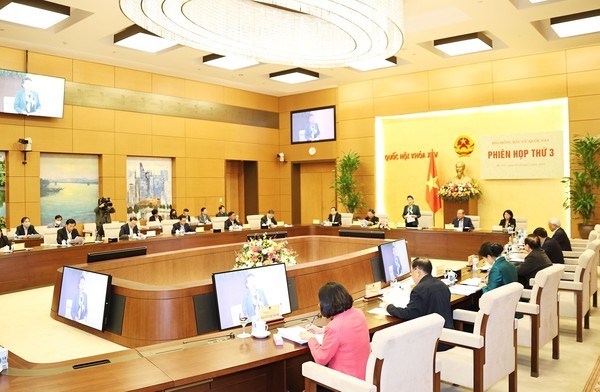 The third meeting of the NEC was held in Hanoi on March 3 (Photo: VNA)

She asked for stronger communications on the election of deputies to the 15th NA and People’s Councils at all levels on mass media, while regularly updating information on the website of the NEC.

She requested the NA Standing Committee and the NEC to coordinate closely with the VFF Central Committee and relevant agencies to implement supervision and inspection over election activities in localities and agencies by May 23.

For candidates managed by the Party Committee of the NA, the NA Standing Committee will prepare the list to submit to the Party Central Committee’s Secretariat, she said.

Meanwhile, the Sub-Committee for Personnel Affairs should promptly consider and give guidelines on processing citizens’ application to run for a seat at the NA in line with the law, she asked./.

The Hanoitimes – The Hanoi mayor asked health and education authorities to closely supervise the health of candidates who returned from Danang, the country’s Covid-19 epicenter.

Chairman of the Hanoi People’s Committee Nguyen Duc Chung has demanded absolute safety for the national high school exams in the city amid a fresh Covid-19 outbreak in the country, Kinh Te & Do Thi reported.

Mr. Chung on August 9 morning inspected the examination organization and encouraged the candidates at Phan Dinh Phung high school where 680 students were taking the exams. Nearly 80,000 Hanoi students sit for the exams this year.

The Hanoi mayor asked authorities to closely supervise the health of candidates who returned from Danang, the country’s Covid-19 epicenter. “We need to take combined measures to prevent the pandemic,” Mr. Chung said.

At Phan Dinh Phung school venue, there were three test-takers returning from Danang. Although the three tested negative for coronavirus, a separate room was arranged only for them to ensure the safety for other candidates.

Regarding pandemic prevention measures, Mr. Chung requested that after each exam, the school must be disinfected at once. Besides, the school needs to make hand sanitizer and medical masks available for students as well as check their body temperature.

He also suggested that parents should not gather outside the school gates. Instead, they should leave after taking their children to the exam venue to ensure social distancing and avoid traffic congestion.

This year, for the first time, around 900,000 high school seniors in Vietnam take the two-day exam amid the Covid-19 resurgence.

The candidates have been divided into four groups, depending on their links with Covid-19: those under medical treatment for Covid-19, those under mass quarantine, those in close contact with suspected cases, and other students. The classification of candidates aims to ensure students’ rights as well as anti-Covid-19 measures in the current period.

The exam results would not only award a high-school certificate, but also decide admission to universities and colleges.

The followings are some photos taken at Phan Dinh Phung high school on August 9 morning:

Speaking at the congress, PM Phuc urged the association to continue its work in building up the Vietnamese intellectual circle in order to serve national development.

The Government leader spoke highly of VUSTA’s role in gathering and uniting Vietnamese scientists and technical experts at home and abroad, providing favourable conditions to make contributions to their homeland.

Intellectuals lay the foundation for social progress, and Vietnamese intellectuals play a crucial role in the country’s construction and development, the PM said, asking the union to strengthen its operations to become a strong political and social organisation, acting as the voice of scientists and technicians across the country, while caring for and protecting the legitimate rights and interests of its members.

The union was also assigned to serve as a consultant for the Party and State in gathering the brainpower of intellectuals, while contributing ideas to the Party and State’s policies and major socio-economic projects and programmes.

The congress saw the participation of over 900 delegates representing more than 3 million VUSTA members nationwide.

The participants reviewed the union’s operations in the 2015-2020 period and set out its orientations and tasks for the next five years.

Member of the Party Central Committee and Chairman of the National Assembly’s Committee for Science, Technology and the Environment Phan Xuan Dung was elected as President of the union.

The Hanoitimes – People have been advised to keep away from the crowd and wear medical masks.

Vietnam’s Ministry of Health (MOH) has warned residents to avoid the crowd if unnecessary in the context that the number of new coronavirus (nCoV)-caused infections has risen to eight in the country.

The ministry has advised residents to wear medical masks when they are outside and to keep distance with people at risks of nCoV-caused respiratory sickness.

The ministry has issued a number of document guiding the prevention and control of the nCoV and instructions how to wash hands and wear medical masks correctly.

Meanwhile, residents have been aware of protecting themselves from the epidemic by avoiding crowds and wearing medical masks for schoolchildren in classes.

Notably, the ministry announces two national emergency lines namely 19009095 and 19003228 that provide free calls for information relating to the nCoV and 21 hotlines at 21 hospitals across the country.

In another move, the Vietnam Social Security has announced that they will facilitate the payment for people covered by health insurance in the checkup and treatment of nCoV-caused respiratory sickness.

As of February 3, Vietnam has confirmed eight individuals infected with the coronavirus, including two Chinese men, four Vietnamese citizens coming back from China’s Wuhan City, one American who transited in Wuhan, and one Vietnamese receptionist who had contacted with the infected Chinese nationals.

So far, the epidemic has spread to 27 countries and territories, being confirmed in 17,389 people, including 184 outside China, causing 362 deaths including one outside China (in the Philippines). 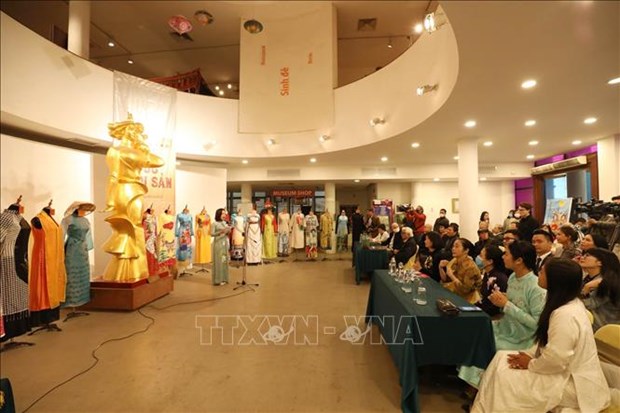 Hanoi (VNA) – The Vietnam Women’s Museum in Hanoi on March 3 received photos, documents and items with the theme “ Memories and Heritages ” from diplomats, photojournalists, female doctors, and fashion designers.

The event is the beginning of a series of activities to honour the “ao dai” (traditional long dress), marks the 111th International Women’s Day on March 8, and responds to the “ Week of Ao Dai ” launched by the Vietnam Women’s Union (VWU). It also marks the success of the 13th National Party Congress.

Ambassador Nguyen Phuong Nga, President of the Vietnam Union of Friendship Organisations and former Deputy Foreign Minister, donated two “ao dai” she wore during a ceremony to receive a decision on her appointment as Ambassador and head of Vietnam’s Permanent Mission to the UN, and a ceremony to present a Letter of Credentials from then State President Truong Tan Sang to UN Secretary General Ban Ki-Moon in 2014.

Twenty designers donated 20 “ ao dai ” out of more than 1,000 displayed at a show held jointly by the VWU and the Ministry of Culture, Sports and Tourism on June 28 last year.

Photojournalist Dinh Quang Thanh, a former reporter of the Vietnam News Agency, presented nearly 400 works to the museum featuring the beauty of Vietnamese women in labour and life as well as craft villages and local landscapes./.