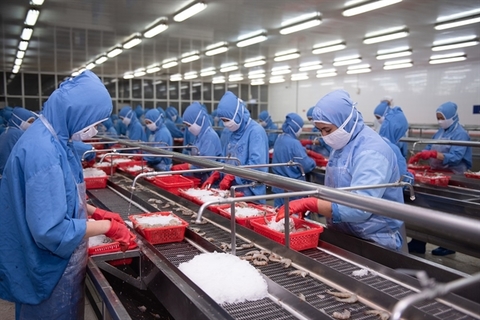 Shrimp production at Fimex Vietnam, one of PAN Group’s subsidiaries. — Photo courtesy of the company

The PAN Group Joint Stock Company reported consolidated net revenues of VND1.68 trillion (US$72.8 million) and consolidated profit after tax of VND50 billion ($2.17 million) for the first quarter, 31 per cent and 75 per cent up year-on-year.

Profit after tax attributable to shareholders of the parent company was VND22.4 billion ($970,390), an increase of 58 per cent.

The revenue growth was mainly from shrimp exports (up 36 per cent year-on-year), seed and agricultural products (11 per cent), confectionery (up 63 per cent), and coffee (up 41 per cent).

In the cashew segment, the group has promoted the production and trading of branded products and those having value addition, and reduced sales of raw cashew that offers high revenues but low margins.

Due to the sharp increase in logistics costs and raw material prices in Q1, though shrimp exports grew by 36 per cent, profit fell by 23 per cent.

PAN Group’s member company – VFC reported a profit of VND32 billion, an increase of 29 per cent, and contributed VND11 billion (equivalent to Q1 last year) to the company’s consolidated profits.

In the following quarters it would continue to promote its core products, focus on cost reduction, speed up the acquisition of BBC shares from Lotte until it fully owns it, and increase its ownership in VFC to over 50 per cent to complete its value chains in the agriculture sector, the company said. — VNS