Hanoi envisions to become a highly competitive city nationwide and of the region in a five-year time by restructuring the growth model based on technological advancement and innovation.

Hanoi expects its gross regional domestic product (GRDP) growth to average 7.5-8% in the 2021-2025 period, as the capital city pursue rapid and sustainable economic growth to eventually become a green and smart city.

In Hanoi’s GRDP structure during the period, the services sector would be at the center of growth making up 65-65.5% of the local economy, followed by industry and construction with 22.5-23%, and agro-forestry-fishery with 1.4-1.6%.

The objective was set in the draft socio-economic development plan for Hanoi that was subject for discussion at a conference on April 20.

“The plan would help put the resolution of Hanoi’s 17th Party Congress into practice,” said Chairman of the Hanoi People’s Committee Chu Ngoc Anh, saying the discussion offers an opportunity for local authorities to contribute to the city’s five-year development plan.

Under the draft plan, Hanoi envisions to become a highly competitive city nationwide and of the region in a five-year time by restructuring the growth model based on technological advancement and innovation. Hanoi continues giving priority to the application of modern and environmentally-friendly technologies, along with robotics, artificial intelligence (AI), internet of things (IoT), big data, 5G, fintech, and blockchain.

The city is expected to complete the industrialization process in the next five years and attain a GRDP per capita of around US$8,300-8,500.

Meanwhile, digital economy is set to make up 30% of the GRDP, while productivity growth should be around 7-7.5%.

“The city would gradually tighten spending for greater efficiency, including a shift towards capital expenditure and keeping regular spending at 50% of total expenditure by 2025,” noted the plan.

For the past five-year period, despite making up only 1% of the country’s land and 8.5% of the population, Hanoi contributes 18.5% to the country’s budget revenue, 16% of GDP, and 8.6% trade turnover annually.

Lotteria, a subsidiary of South Korea’s Lotte Group, will expand its investment in Vietnam through opening more 28 fast-food stores and building a new food material factory in Long Hau Industrial Park in the southern province of Long An.

A representative from Lotteria Vietnam confirmed this information with Hanoitimes and denied a recent report that it will close its fast-food chain in the country. He also said the report of the Koreatimes resulted from a misunderstanding.

Lotteria franchises in Vietnam have all stopped operations, the Koreatimes wrote, and its headquarters in Seoul is reviewing the possibility of closing down the business within 2021. It didn’t make any profit last year.

The chain now has more than 260 stores including 100 under the franchise model across Vietnam since 1998.

The Vietnamese market is considered as potential market for the development of the food & beverage industry. With the desire to develop sustainably and consolidate its leading position in this vibrant market, Lotteria started franchising to co-develop with partners nationwide from October 2014.

As of April 2020, Lotteria was the leading fast food chain in Vietnam with 151 stores, followed by Jollibee with 115, according to Statista, a German market research firm.

Nha Trang City in the southern central province of Khanh Hoa is witnessing a sharp rise in the number of tourists after Covid-19 pandemic has been brought under control in Vietnam.

Since early this month, travellers who have come to the city for beach tours have increased by 100-150% against March. Tran Van Phu, head of Nha Trang tourism wharf management board, said that over the past two weeks, around 1,000-1,500 people had taken canoes from local wharves to visit Nha Trang Bay daily. The figure increased to 2,000-2,500 people on Saturdays and Sundays. According to Phu, besides the controlled Covid-19 pandemic, the province’s tourism promotion activities have also helped attract more visitors. Nha Trang City’s weather is quite nice at this time of year, which is suitable for tourism activities. The number of tourists to Nha Trang is expected to reach 5,000-7,000 a day during the coming Reunification Day and May Day holiday. To ensure Covid-19 prevention regulations, wharves in Nha Trang have arranged more staff to help provide temperature checks for visitors who are also asked to wear face masks and use hand wash. Earlier, the Khanh Hoa Department of Tourism invited representatives from local travel firms to the province to survey tourism potential and sign co-operation agreements on preferential tourism services.

At the reception, the Japanese ambassador thanked Rear Admiral Nghiem for warmly welcoming the Japanese delegation, highlighting that Japan always considers Vietnam an important strategic partner, especially in recent years when the relationship between the two countries has been expanded in many fields.

He also affirmed that the two countries have enjoyed fruitful results of naval cooperation over the past time. The Vietnam People’s Navy created favorable conditions for port calls to Vietnam by Japanese naval ships. He hoped that the bilateral ties would be further expanded in the coming time.

For his part, Rear Admiral Nghiem recalled milestones in the friendship and cooperation between the two governments, militaries, and navies over the past time, which has contributed to building the Vietnam-Japan extensive strategic partnership.

Regarding naval cooperation, the two navies have exchanged delegations, sent ships to visit each other, and held training exercises at sea.

Rear Admiral Nghiem expressed his hope that in his new working position, Ambassador Yamada Takio would continue to make positive contributions to bringing the relationship between the two countries in general and the militaries and navies in particular to a new height.

Tens of thousands of smiles of many people of all different backgrounds nationwide are presented in pictures which were taken by photographer Tran The Phong over the past 10 years.
The Sai Gon Giai Phong Newspaper introduces some photographs of artist Tran The Phong. He will release his 10th photo book and the 16th solo photo exhibition at HCMC Book Street on March 27. 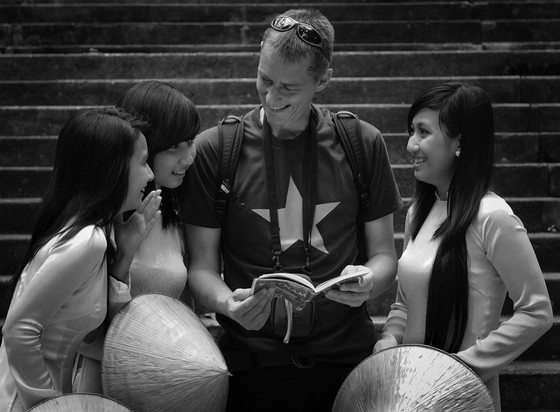 Friendly smiles of Vietnamese people and foreign visitors in HCMC (2011) 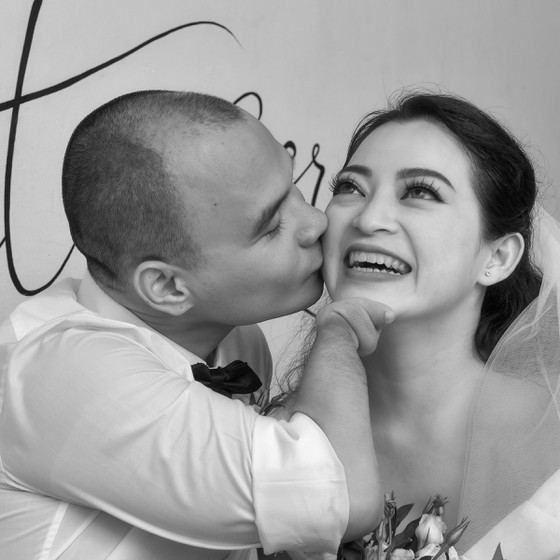 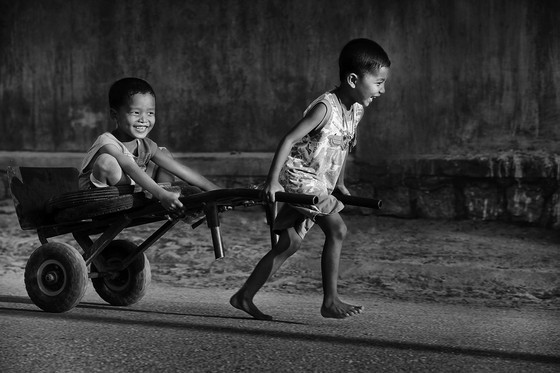 Two children play with a primitive go-cart in Phan Rang City in the South central coastal province of Phan Rang. (2013)

The smile of a little buffalo cowboy in Phan Rang (2015) 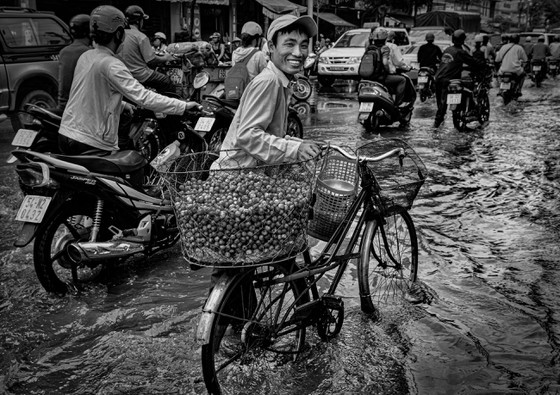 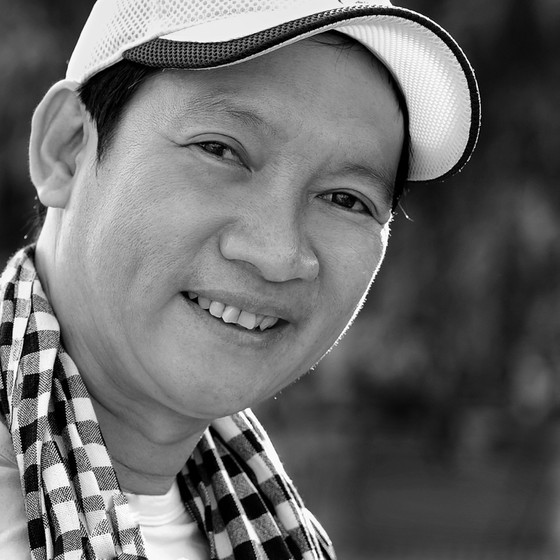 Attending the ceremony, State President Nguyen Xuan Phuc, Party and State officials, and leaders of Phu Tho province offered incense and flowers in tribute to the Hung Kings, praying for the nation’s peace and prosperity.

Chairman of the provincial People’s Committee Bui Van Quang spoke highly of the great contributions of the Hung Kings, the legendary founders of Van Lang – the first State in Vietnam, while praising their resilience in protecting the nation.

Following the incense offering ceremony, State President Nguyen Xuan Phuc and the delegates laid a wreath of flowers and offered incense at the tomb of the 6th Hung King, and paid tribute to late President Ho Chi Minh and martyrs at a relief featuring the late leader’s speech to soldiers from the Tien Phong Vanguard Division stationed at the relic site.

On the occasion of the death anniversary of the Hung Kings, many Vietnamese people from across the country and abroad have paid homage to the national founders at etemple complexes.

This year, many activities being held on the occasion have been adjusted to suit the “new normal” situation, with COVID-19 prevention measures strictly in place. The worship of the Hung Kings popularises the UNESCO Intangible Cultural Heritage of Humanity among Vietnamese nationals and foreign friends.

Earlier this morning, President Phuc visited the Tu Xa new-style rural commune in Lam Thao district, where he visited several public works such as markets and stadia, and met with local residents.

He asked the commune to speed up the application of science and technology, and develop its One Commune One Product (OCOP) products to better serve the market.