MUNICH, Germany — Three years on from their disappointing group-stage exit at the World Cup, very little seemed to have changed for Germany as they began their European Championship campaign in limp fashion, looking unable to score and out of ideas in their loss to France.

Two losses from their three group matches saw Germany eliminated early in Russia in 2018, and things have not improved much since, with coach Joachim Loew taking the decision to step down after Euro 2020.

The outgoing coach said before the tournament that he wanted to sign off with “something special”, but hopes of reaching the latter stages this summer could turn out to be forlorn, based on the evidence of Germany’s display in Munich on Tuesday.

Their 1-0 loss to France was the first time Germany have been defeated in their opening match at a European Championship finals, but what was most worrying for Loew was his side’s lack of killer instinct in front of goal in the Allianz Arena.

Germany’s last two games at the European Championships have both been defeats at the hands of France. They have had 28 shots across the two games without managing to score: 18 in 2016 and 10 more on Tuesday night.

Not one member of Loew’s squad has scored a goal at a European Championship finals – a lack of knowhow in the final third that was clear for all to see as the hosts got into dangerous positions in Munich but failed to really test Hugo Lloris in the France goal.

They had more shots, more than 60% possession, and they put five times as many crosses into the box as France. But somehow they could muster only one effort on target throughout the match, a header from defender Antonio Rudiger.

In their so-called group of death, with Portugal to come next, Germany could be facing another early tournament exit before they know it. Loew’s unrivalled experience will be needed now more than ever.

The France encounter was the coach’s 18th game as manager in the European Championships – a record. Loew has led Germany to the semi-finals in five of his six previous tournaments, the only exception coming at the 2018 World Cup.

With only two strikers in his squad, however, Germany have limited options in attack, so the outgoing coach is going to have to be creative.

He does have Champions League winner Timo Werner as a strike option, along with Monaco’s Kevin Volland, but with neither in good form in front of goal, Loew may have to conjure something from another source.

Overall, it looks like German hopes of progression, even just to the first of the knockout stages, rest on such a move.

As many as 117 State agencies, including 34 ministries, 63 provinces and cities, and 20 state-owned corporations saved more than VND84,635 billion, including VND50,628 billion for the state budget last year.

According to the Government’s report on practicing thrift (updated by May 5, 2021) submitted to the National Assembly Standing Committee, 117 agencies, including 34 ministries, 63 provinces and cities, and 20 state-owned corporations saved more than VND84,635 billion, including VND50,628 billion for the state budget.

The five units and localities that saved the least were: State Capital Management Commission with only VND327 million, Vietnam Development Bank with VND1.349 billion, Northern Food Corporation with VND2.641 billion, Ministry of Construction with VND4.579 billion, and Vietnam Television (VTV) with VND5.745 billion.

Two places have not submitted their reports on thrift practicing in 2020 – Ho Chi Minh City and Dong Thap province.

After reviewing the Government’s report, the Finance and Budget Committee of the National Assembly assessed that the practice of thrift and anti-waste has achieved many positive results. However, there are still some shortcomings and limitations that need to be overcome.

Vietnam ranks 4th for profit earned from cryptocurrencies among Asian economies in 2020, only after China, Japan and South Korea.

In a recent report, Chainalysis published a list of the 25 most profitable countries from the growth of Bitcoin in 2020.

Accordingly, US investors made a profit of up to $4.1 billion by investing in the world’s number 1 cryptocurrency, followed by Chinese investors with $1.1 billion. The remaining positions in the top 5 include Japan ($0.9 billion), the UK ($0.8 billion) and Russia ($0.6 billion). This list includes Vietnamese investors, with $0.4 billion of profit in 2020.

On a global scale, Vietnam ranks 13th for Bitcoin-related profitability and in Asia, Vietnam ranked 4th, just behind China, Japan, and South Korea.

According to Chainalysis, due to the decentralized nature of the technology, it is very difficult to find the positions of the parties in a cryptocurrency transaction. The published results were estimated using transaction data from services that Chainalysis tracked.

In its analysis, Chainalysis measured the total volume of Bitcoin transactions at each cryptomoney exchange. They estimated the amount earned by the difference in the price of Bitcoin at the time of entering and leaving the exchange. Chainalysis then distributed this profit based on each country’s web traffic on each exchange.

By doing this, Chainalysis produced a report on the profit earned by investors in each country thanks to Bitcoin in 2020. However, Chainalysis’s methodology is approximate and does not consider profits from the digital assets still on the exchanges.

According to Chainalysis, Vietnam is a perfect example of a country where the level of participation in cryptocurrency transactions far exceeds the ranking of the economy.

Although ranked 53rd for GDP with about $262 billion and rated as a low-middle-income country, Vietnam has a fairly high level of acceptance for cryptocurrency transactions.

On the other hand, being the 4th largest economy with the 2nd largest population in the world, India is left behind in the crypto economy. In 2020, Indian investors only earned $241 million USD from the increase in the price of Bitcoin, ranked 18th in the world.

This is because the Indian government does not appear to be very friendly to cryptocurrencies. India banned all cryptocurrency transactions in the country until the Supreme Court of India lifted the ban in March 2020.

Although many Vietnamese investors are making big profits from cryptocurrencies, investing in Bitcoin or other cryptocurrencies is risky. Therefore, investors should be careful before deciding to enter this harsh market. 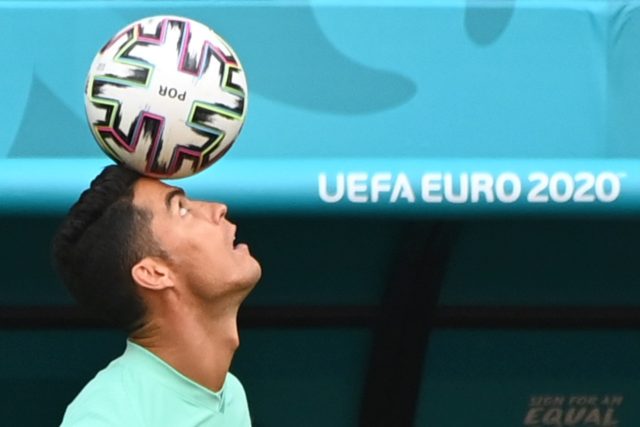 Cristiano Ronaldo now has a record 11 European Championship goals after his brace in Portugal’s 3-0 win over Hungary. — AFP/VNA Photo

PARIS — World champions France beat Germany in a blockbuster Euro 2020 clash on Tuesday, after Cristiano Ronaldo became the all-time top European Championship goal-scorer as holders Portugal started their campaign with a 3-0 win over Hungary in Budapest.

France deserved the win, with both Kylian Mbappe and Karim Benzema having second-half goals disallowed for tight offside calls while Adrien Rabiot also hit the post for Les Bleus.

“I knew my players would be ready and they were up for the fight,” France coach Didier Deschamps told broadcaster M6.

“It’s our first match, but this is a game that could have been a semi-final or a final and to take these three points in a group like this was important.”

The win was savoured by a small band of French fans among the crowd in the Allianz Arena, which was limited to just 20 per cent of capacity because of Covid-19 restrictions.

It was also enjoyed by fans back home in France who packed into bars to see their team kick off their bid to add the European crown to the World Cup they won in Russia three years ago, despite the game ending just before the 11:00 pm nationwide coronavirus curfew.

Germany’s defeat turns up the pressure on them in what is coach Joachim Loew’s last tournament in charge before he steps down.

“France have shown they are one of the favourites and now we have to prove that too in the next game,” Germany’s Joshua Kimmich said.

Germany’s next game is against Portugal, the Euro 2016 winners who got off to the perfect start in Group F as Ronaldo netted his 10th and 11th goals at European Championships, surpassing the previous record of nine held by France legend Michel Platini.

Portugal appear to have a much stronger squad than when they won their first major title five years ago, yet they laboured for long periods in Budapest before Raphael Guerreiro made the breakthrough in the 84th minute.

Ronaldo then slammed in a penalty shortly afterwards before tapping home in injury time.

The 36-year-old has now scored at five different European Championship finals tournaments and has 106 goals for his country in total, leaving him just three away from matching Iranian Ali Daei’s all-time international scoring record of 109.

“I am really grateful to the team for helping me to score twice and be named man of the match,” Ronaldo said.

He broke the record before by far the biggest crowd of the tournament so far, with Budapest the only Euro 2020 venue not to limit fan capacity due to COVID-19.

The Puskas Arena has a capacity of almost 68,000 fans.

“We didn’t deserve a 3-0 defeat, with a bit of luck it could have been a point each, but it was an experience of a lifetime,” said Hungary goalkeeper Peter Gulacsi.

Hungarian newspaper Nemzeti Sport said the crowd of around 65,000 was the biggest at a game in the country since a World Cup warm-up against Brazil in 1986.

Back in Munich, a disaster was narrowly averted before the game when a Greenpeace activist crash-landed on the pitch after his powered parachute microlight struck spidercam cables.

The pilot flew over the pitch with “Kick out oil” written on the canopy of his parachute, but when the pilot hit television cables above the pitch, it knocked his microlight off balance and he landed on the turf after clipping one of the stands.

“This inconsiderate act… caused injuries to several people attending the game who are now in hospital and law authorities will take the necessary action,” UEFA said.

On Tuesday Eriksen published a photo of his tired but smiling face from his hospital bed.

“I’m fine — under the circumstances, I still have to go through some examinations at the hospital, but I feel okay,” he wrote in a post on Instagram.

Wednesday will see the first of the second round of group games, with Russia hosting Finland in Saint Petersburg before Turkey take on Wales in Baku and Italy face Switzerland in Rome. — AFP

Among 150 works selected from 1,823 entries, the judging panel chose 112 outstanding works which will be honoured at the awarding ceremony.
Specifically, there will be a special prize, nine A prizes, 25 B prizes, 45 C prizes, and 32 consolation prizes.
This is also the first edition of the contest to see the participation of all 63 journalist associations around the country.
The 150 submissions reported on multiple issues in politics, socio-economic development, and security and national defence, especially Party congresses at all levels leading up to the 13th National Party Congress, as well as the fight against COVID-19, natural disasters in the central region, and drought in the south, among others.
Addressing the press conference in Hanoi, permanent Deputy Chairman of the Vietnam Journalists Association (VJA) Ho Quang Loi said this is a big event drawing special attention from the press nationwide, and is the highest award for outstanding journalistic works every year.
Due to the complicated developments of COVID-19, the ceremony of the 15th National Press Awards will be organised during the upcoming 11th Congress of the Vietnam Journalists Association, instead of the Vietnam Revolutionary Press Day (June 21) as usual, Loi said.

Of particular note, a special prize will be awarded for the first time ever, according to Thuan Huu, Chairman of the Vietnam Journalists Association (VJA) and Chairman of the National Press Awards Council.

The 150 submissions reported on multiple issues in politics, socio-economic development, and security and national defense, especially Party congresses at all levels leading up to the 13th National Party Congress, as well as the fight against COVID-19, natural disasters in the central region, and drought in the south, among others.

The 15th National Press Awards ceremony will be held during the upcoming 11th Congress of the VJA in Hanoi.