“Oh, a vicious back block! That’ll be a penalty.”

“Well, she had no choice but to fall small there.”

Soooooooooo if terms like this have you scratching your head, you may be puzzling over what the rest of this article is about. If they sound familiar, it means you have become acquainted with roller derby.

A brief explanation consists of a bout of short scrimmages, or jams, in which both teams designate a jammer, wearing a telltale star on their helmet, and four blockers to skate counter-clockwise around a track. The jammer scores points by lapping members of the opposing team, while trying to get by the opposing blockers.

The sport has its origins in the banked-track roller-skating marathons of the 1930s, but Americans Leo Seltzer and Damon Runyon are credited with evolving the sport to its competitive form. Professional roller derby quickly became popular, although in later decades it developed into something more akin to professional wrestling, with garish outfits and trash-talking teams on shows like Roller Games in the U.S.

During those eras, contact sports for women were uncommon. The sport has attracted athletes from a variety of backgrounds every since, with interests ranging from general fitness to something new and interesting, involving everything from cardio fitness to the ability to take a solid hit from time to time.

Claire Stableford, coach and founder of the fledgling Saigon Roller Derby group, competed at a high level in her native United Kingdom for several years before relocating to Vietnam, only to discover no fixtures existed here. She likes the direction things have taken and sees this market as wide open for introducing a fast-paced style of competition like roller derby.

“I think many Vietnamese people like it because it’s something completely new,” she said. “It’s especially different for many Vietnamese women who join us because there aren’t too many full contact sports which are primarily played by women.”

While being in close contact may be an issue in other newer markets for the sport, Stableford said this has been less of an issue than, in fact, equipment for Vietnamese skaters.

“Many of the skaters who have joined us have skated on inline skates before as they’re quite popular here,” she said. “But they have never used quad skates which is the standard skate style for roller derby, this takes some adjustment too.”

Stableford called the reception to the club “overwhelmingly positive,” with the Saigon Roller Derby page shared by several local businesses and good response from recruitment drives.

Stableford said there’s no date for an upcoming game just yet, but May has been discussed. Other teams in Asia have also reached out requesting a coaching boot camp once border restrictions loosen up. Every Sunday is a chance for new members to skate with the group in Binh Thanh District. 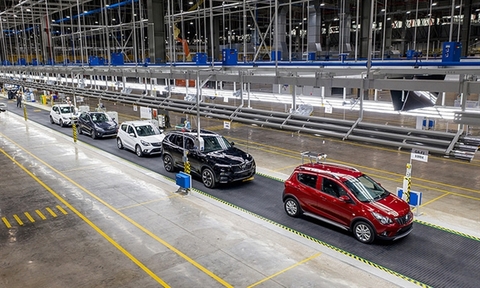 Reuters cited sources saying that Foxconn proposed to acquire EV production lines from VinFast. However, a spokesperson for VinFast said they had not discussed any details relating to this matter.

“The partnership, if any, will only focus on developing the batteries and electric vehicle parts. There is no information regarding the cooperation of the two parties in producing EVs,” the spokesman added.

VinFast wants to become Foxconn’s partner but not in manufacturing orders.

Foxconn, the world’s largest provider of electronics components, has outlined plans to become a major provider of parts and services in the global EV market, so any agreement with VinFast would follow deals with Fiat Chrysler and other EV start-ups.

VinFast became Viet Nam’s first domestic vehicle manufacturer with its own badge to debut the first gasoline-powered models in 2019. The automaker has a factory in the northern port city of Hai Phong which is also responsible for main production.

The company sold about 30,000 vehicles last year and is expected to deliver the very first EVs to the domestic market at the end of 2021.

VinFast, which is also producing electric motorbikes and buses this year, signed a contract to produce electric vehicle batteries with Taiwan’s ProLogium. — VNS

People making orders before June 30, 2021 can purchase the EV for just VND590 million and get a free-of-charge battery lease for one year. Deliveries are scheduled to begin in November 2021. There have been a large number of people sharing their pre-order forms on social media platforms. Many voiced their support for the Vietnamese automaker’s environmentally-friendly initiative to introduce electric cars to Viet Nam, especially since air quality in large cities across the country has worsened in recent years.

Buyers can visit the website http://shop.vinfastauto.com or VinFast’s showrooms and merchants nationwide to make a refundable deposit, valued at VND10 million, for each pre-order. The deposit will be refunded if orders are cancelled.

VinFast is going ahead with its battery leasing plan which allows customers to rent out batteries separately from the EV. It is intended to reduce the initial cost of buying an EV for customers and let the automaker bear all the risks regarding the EV battery’s quality and lifespan.

The company has been working around the clock to build a network of about 40,000 charging stations across the nation by the end of this year.

VinFast, which is also producing electric motorbikes and buses this year, signed a contract to produce EV batteries with Taiwan’s ProLogium.

VinFast has just become the 57th automaker to receive a licence to test self-driving EVs in California, the US.

The launch of high-tech electric vehicles, including electric scooters, electric buses and personal electric cars, is part of VinFast’s pre-defined roadmap since entering the automotive market three years ago. — VNS 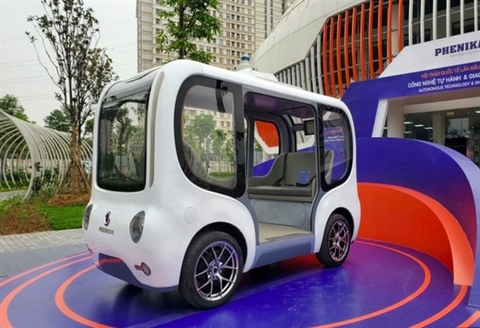 The electrical eco-friendly self-driving vehicle also has nearly 40 level-4 self-driving features based on the standards of the Society of Automobile Engineers (SAE International), in which level 5 is the highest.

Phenikaa’s smart autonomous vehicle is driverless and the user can take control of the vehicle via a customised application.

It still needs to undergo more tests for safety and at different locations, as well as more research to reduce production costs before being brought to market.

With the current infrastructure, technology and regulations in Viet Nam, it might take some time before the vehicle can be used on the roads.

Through the project, the group also expects to create a high-quality workforce for the local market.

“We don’t hold a dream of becoming an automaker. When investing in this project, our first target is to create useful and good high-tech products for lives,” Ho Xuan Nang, Chairman of Phenikaa University, said.

“And the second purpose is to gather researching forces and to show that this kind of research in a university is really useful for training and teaching.” 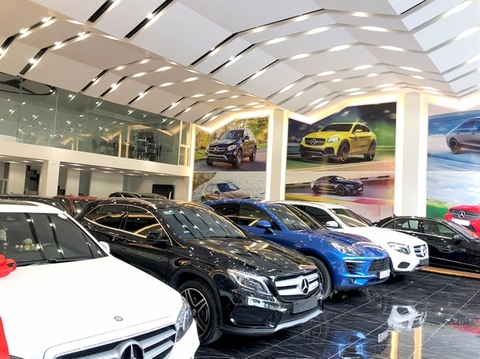 The import of automobiles increased dramatically in March, according to figures released by the General Department of Customs (GDC).

But although more and more cars are coming into Viet Nam, purchasing of vehicles tends to slow at the beginning of the year.

Statistics shows that last month more than US$347 million worth of CBU (Completely Built-up Units) were brought into the country.

This was an increase of 69.3 per cent in volume and 66 per cent in value compared to the previous month and almost matching the figures for the first two months combined.

Industry insiders attributed the surge to the increasing demand of transport businesses and private use after the economy stalled due to COVID-19.

While car dealers remained cautious about the prospect of car market, many expected more positive sale figures for the second quarter given the launch of many new models.

Automobile sales has continuously declined in the first two months of the year,

The Vietnam Automobile Manufacturers Association (VAMA) reported that car sales in February 2020 stood at only 13,585 units, down 48.6 per cent compared to the first month of the year.

Car purchasing power in the first month of 2021 also suffered a decline of 45 per cent compared to the previous month. — VNS 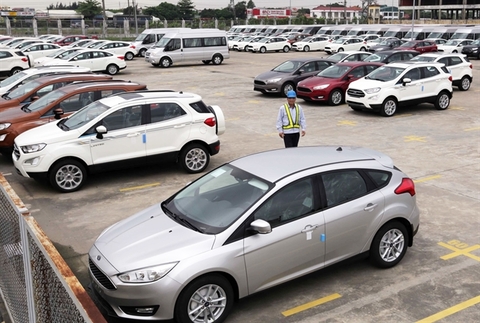 Ford Vietnam’s sales in the first quarter of 2021 rose 52 per cent against the same period last year, equivalent to 5,914 vehicles delivered to customers.

The company’s General Director Pham Van Dung said the automaker’s sales maintained growth thanks to leading products, particularly sport utility vehicles (SUVs) and commercial ones, despite a period of business stagnation in the domestic auto market and adverse impacts of the COVID-19 pandemic.

In Q1, Ford Vietnam’s sales of Everest SUVs recorded a year-on-year surge of 49 per cent, with 1,459 vehicles sold. In March alone, the number of delivered vehicles hit 817, leading the mid-size SUV segment with more than 50 per cent of the market share.

In addition, Ford Ranger maintained its lead among the country’s pickups, accounting for nearly 75 per cent of the market. Some 2,170 cars sold in March brought the total count to 3,873 in Q1, doubling the figure of the same period last year.

The sales of Ford Transit continued to come first among commercial vehicles, posting a year-on-year rise of 33 per cent in March and bringing the figure since the start of the year to 184.

Honda Vietnam also reported increases of 17.3 per cent and 94.1 per cent in its sales of motorbikes and automobiles in March, respectively, compared to the previous month.

A total of 2,486 automobiles, meanwhile, were handed over to customers.

Honda City was the most sought-after model, with 1,182 vehicles delivered in the month, accounting for 47.5 per cent of the total sales.