The Vietnamese economy is forecast to grow seven percent per annum in 2021-22, largely driven by increased export and investment, Fitch Ratings said in a post on its website on Tuesday.

“Strong export growth and a successful campaign to contain the spread of COVID-19 have supported Vietnam’s economy through the pandemic,” the American credit rating agency remarked.

Other parts of Vietnam’s economy have proved robust despite tourism, one of the country’s main sectors, hit the hardest by the coronavirus crisis.

The government posted 2.9 percent in GDP growth last year, placing Vietnam among a handful of nations globally that reported positive economic growth amid the pandemic stress.

“Domestic activity was also supported by the limited spread of COVID-19 in the country.

“We expect growth to remain strong, at around seven percent annually, in 2021-2022, buoyed by continued export expansion and higher investment.”

The Southeast Asian country’s COVID-19 tally has reached 2,733, with 2,445 patients having recovered from the respiratory disease, as of Wednesday evening, according to the Ministry of Health’s data.

Growth prospects will be reinforced by a pandemic fiscal package for 2020-21 of about VND292 trillion (US$12.7 billion), or roughly 3.6 percent of the 2020 GDP, Fitch Ratings forecast.

Vietnam is benefiting from such new trade agreements as the EU-Vietnam Free Trade Agreement and the Regional Comprehensive Economic Partnership, as well as the country’s cost competitiveness.

Vietnam’s generally robust economic outlook remains subject to risks, as its vaccination program has moved slowly, beginning only on March 8, the company observed.

The nation has so far received 928,800 coronavirus vaccine doses from direct purchases or the COVAX scheme, co-led by the World Health Organization, according to the health ministry’s figures.

Over 60,000 people have been vaccinated against COVID-19 as of Wednesday evening.

“Vaccine hesitancy among the public appears low, which is a positive sign, but Vietnam’s confirmed vaccine orders cover a lower proportion of the population than in some neighboring states, such as Indonesia and Malaysia,” Fitch Ratings said.

“Should the country experience a major COVID-19 outbreak before vaccines are widely rolled out – prompting lockdowns – growth prospects and public finances could be affected.”

The rest of the stake is held by two other Japanese companies – 37.5 percent by T. Chatani & Co., a subsidiary of chemical goods trading house OG Corp., and 11.5 percent by Koatsu Gas Kogyo Co., a manufacturer of high-pressure gas.

The waterproof materials market in Vietnam is expected to expand in line with the country’s economic growth, an Ube Industries spokesman told NNA, commenting on the establishment of the new local unit as the Ube group’s first business base in Vietnam.

Ube Construction Materials was founded in 2015 and plays a central role in the group’s construction materials business. 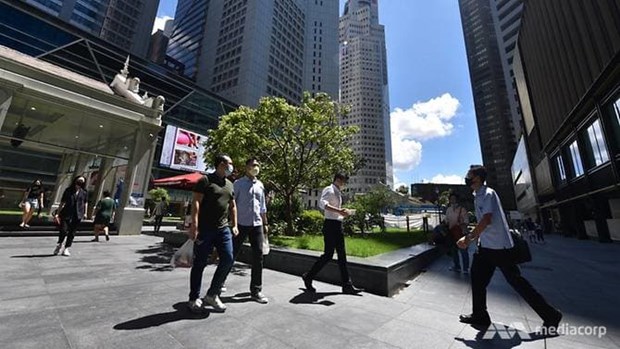 Illustrative image (Photo: VNA)
Singapore (VNA) – The Singaporean economy grew 0.2 percent in the first quarter of this year, a positive signal compared to a 2.4 percent contraction in the fourth quarter of 2020.

The growth was fuelled by an expansion of 7.5 percent in manufacturing sector, 3.7 percent in information-communications, finance-banking and professional services.

In a report released in February, the ministry forecast that Singapore’s economy will recover gradually this year and achieve a growth of 4-6 percent./.

However, this figure is a bit lower than the Asia Pacific and global average of 65 percent and 64 percent, respectively, according to a survey conducted by PricewaterhouseCoopers (PwC), which interviewed 2,800 family business leaders in 87 economies, including 33 from Vietnam.

For 2022, 33 percent of surveyed family business leaders from Vietnam expect quick, aggressive growth, higher than the regional average of 28 percent and the global figure of 21 percent.

Business expansion and technology adoption are the key priorities of Vietnamese family businesses in the coming years, the survey found. While 55 percent said they would focus on creating new products and services, 52 percent mentioned increased use of new technology.

Over half (52 percent) of the Vietnamese respondents expect that the next generation to become majority shareholders within five years’ time, but just 36 percent said they have a formal succession plan in place.

Vietnamese family businesses seemed to lag behind in terms of digital capabilities, with just 30 percent saying they were strong in this area against the global average of 38 percent.

Family businesses are a core economic factor in any country, including Vietnam. The 100 largest family businesses contribute about 25 percent of the country’s GDP, Vu Tien Loc, Chairman of the Vietnam Chamber of Commerce and Industry (VCCI), has noted.

As many as 95 percent of Vietnamese enterprises are family businesses and the majority are led by the first generation or the first two generations, he added.

In their end-of-term report, JICA experts identified the urban planning for the area surrounding Lien Chieu Port, a transport connectivity plan, a plan to find suitable locations for terminals, the feasibility of a public-private partnership, a model for effective management and operation of this port, and an appropriate investment plan harmonising interests of both State and private sector.

Vice Chairman of the Da Nang People’s Committee Le Quang Nam said the Prime Minister, in his decision to give the in-principle approval, requested the municipal People’s Committee to promptly carry out procedures to select capable investors to build and run terminals of Lien Chieu Port in line with legal regulations.

He said JICA’s participation and assistance in preparing for the project are highly necessary that will create a prerequisite for the development of this port.

Shimizu Akira, Chief Representative of the JICA Vietnam Office, said Lien Chieu Port should be put into use as soon as possible, adding that the consultancy group will take into account the city’s opinions to perfect the port development plan.

He also expressed his hope for continued cooperation from local authorities in this issue.

The four-day event features a great variety of quality Thai products and services and is expected to attract more visitors, including distributors and consumers alike. The expo also aims to create a business platform for both Thai and Vietnamese enterprises to expand their networks and develop partnerships.

“Two-way trade volume reached $15 billion, with $9.3 billion of registered capital. This reflects the confidence of the Thai private sector in Vietnam’s vibrant economy,” she added.

Building upon our robust economic cooperation, Top Thai Brands further accentuates the global trend where “branding” holds added-value to the products and also widens opportunities for small- and medium-sized enterprises to grow.

The event not only creates business opportunities for the Thai private sector but also provides access for Vietnamese parties to top quality Thai products at reasonable prices, thus contributing to mutual benefits and partnerships between Thai and Vietnamese entrepreneurs.

Top Thai Brands 2018 is taking place from May 10 to 15 at Saigon Exhibition and Convention Centre in District 7. The exhibition is being organised by the Thai Trade Centre in Ho Chi Minh City in collaboration with Vietnam National Trade Fair & Advertising Company.