The Hanoitimes – There has been a growing number of Indonesian investors coming to Vietnam, especially in the field of digital economy.

In a context of strong bilateral relations, Vietnam-Indonesia trade turnover exceeded US$9 billion in 2020 and could reach the US$10-billion mark in 2021.

Secretary of the Hanoi Party Committee Vuong Dinh Hue share his view in a meeting with the out-going Indonesian Ambassador Ibnu Hadi who came to bid farewell.

“Hanoi and Jakarta, the two capital cities of Vietnam and Indonesia, have contributed a significant part to the Vietnam-Indonesia relations,” he noted.

Indonesia is one of the countries with the highest number of tourists coming to Hanoi, while many projects from Indonesian investors are operating efficiently in Vietnam in general, and in Hanoi in particular, Mr. Hue said.

The Hanoi party chief said this year, Hanoi is on track to reach an estimated economic growth of nearly 4%, which is lower than the year’s target of 7.5% but would be 1.5 times higher than the national average (2.5-3%).

“Such result is thanks to Hanoi’s successful efforts in containing the Covid-19 pandemic,” Mr. Hue added.

In 2021, Hanoi targets to regain the growth momentum by pushing for administrative reform, greater competitiveness and improvements in the business environment, Mr. Hue said.

The goal would be to attract more investors to do businesses in the city, including those from Indonesia.

Indonesian Ambassador Ibnu Hadi said there has been a growing number of Indonesian investors coming to Vietnam, especially in the field of digital economy.

“This shows the attractiveness of Vietnam’s business environment and its incentive policies,” stated Mr. Hadi, expecting to see growing presences of Indonesian companies in Vietnam.

According to Mr. Hadi, Vietnam has become an example in the fight against the Covid-19 pandemic, which is also the reason for a strong economic growth of Hanoi and also of Vietnam in overall.

The Ambassador said regardless of his position in the future, he would continue to contribute to the bilateral relations of the two countries and that of between Hanoi and other provinces/cities of Indonesia.

Ho Chi Minh City will not trade the environment for economic growth, chairman of the municipal People’s Committee Nguyen Thanh Phong said at a tree planting and environmental sanitation campaign in Thu Duc City on Sunday.

Speaking at the event, chairman Phong stated that planting trees reflects the cultural beauty of Ho Chi Minh City and is a practical activity given the ongoing climate change.

“Since 2011, environmental protection has been included in one of the city’s seven breakthrough programs,” the official stated.

The people and government of Ho Chi Minh City, and Thu Duc City in particular, will join hands to make the southern metropolis a green, clean, and beautiful city, Phong remarked.

Such activities will help spread the message of environmental protection and combat climate change, while spurning the country’s effort to plant one billion trees.

Hoang Tung, chairman of the Thu Duc City People’s Committee, said that rapid urbanization has brought about a lot of environmental challenges.

Many residents are still littering on local streets and dumping garbage into canals, which exacerbates inundation and pollution.

“To deal with the issue, Thu Duc City has launched tree planting events at three locations and in 34 wards to expand urban green space,” Tung said.

“Through these activities, we hope to raise awareness of environmental protection among local residents.”

Thu Duc City has set a goal of planting one million green trees during the 2021-25 period, the official added.

The Hanoitimes – South Korean experts will help operate the Vietnam’s largest trade center, which is expected to serve as a bridge to connect trade, cultural and tourism activities between the two countries.

The World Trade Center Binh Duong New City, the largest of its kind in Vietnam, is scheduled for opening in the southern province of Binh Duong this month.

The center will be operated by the Korea International Trade Association (KITA) and Coex Convention & Exhibition Center (COEX), according to an agreement signed with Vietnam’s real estate and infrastructure developer Becamex IDC on March 8.

Under the agreement, COEX will send its experts in exhibition organization and infrastructure management to Vietnam to operate the center.

A COEX representative expected the center to play a key role in facilitating cooperation between South Korean companies and their international peers under South Korean government’s “New Southern Policy”.

The Hanoitimes – Trade relations between Vietnam-Indonesia is expected to return to the upward trend from 2021 and onward, especially as the two are relatively complementary economies.

While Vietnam and Indonesia are two major partners for each other in the region and of the world, there remains huge potential for both countries to boost trade and economic cooperation.

Indonesia’s Ambassador to Vietnam Denny Abdi gave the remarks at a meeting with Deputy Minister of Industry and Trade Tran Quoc Khanh on March 8.

According to Abdi, despite the severe Covid-19 impacts, Vietnam remained the only country in the Southeast Asia with a positive economic growth, saying he is committed to further boost bilateral economic relations.

For his part, Deputy Minister Khanh stressed Indonesia is one of Vietnam’s key partners not only in the Southeast Asia, but also of the world.

“Over the years, Indonesia and Vietnam have been closely cooperating in both bilateral and multilateral channels, including major cooperation frameworks such as ASEAN, WTO or RCEP,” said Khanh.

Khanh added since the establishment of the bilateral strategic partnership in 2013, two-way trade turnover grew from US$5 billion to US$9 billion in 2019.

While the figure has slightly declined in 2020 as a result of the pandemic, Khanh expected trade relations between Vietnam-Indonesia would return to the upward trend from 2021 and onward, especially as the two are relatively complementary economies. 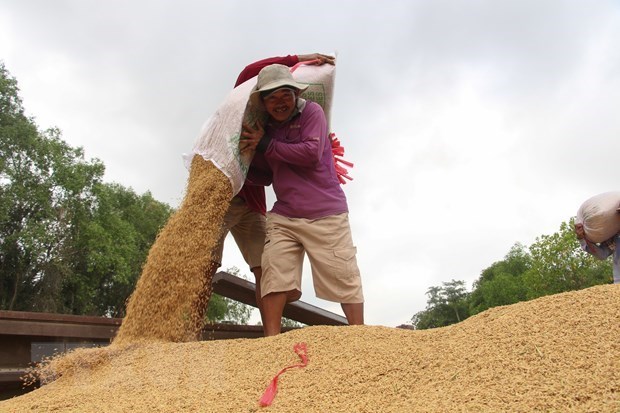 Kien Giang (VNA) – The Mekong Delta province of Kien Giang gained more than 103 million USD from exports in the first two month of the year, surging 12 percent from the same time in 2020.

This is a robust sign in the locality’s trade activities amidst complicated developments of COVID-19.

According to the provincial Department of Industry and Trade, growth was seen in the shipment of seafood (over 37 million USD, up 25.6 percent), and leather shoes (over 22.6 million USD, up nearly 3 percent). Meanwhile, export of rice fell 35.37 percent year-on-year to 17 million USD.

With a view to boosting exports, the province has sharpened focus on trade promotion activities, as well as worked to consolidate traditional markets and expanding markets for local key products, particularly rice and seafood.

In the meantime, the department keeps local exporters updated with the import-export situation and measures to contain the spread of COVID-19 through goods which go through border gates or unofficial border crossings.

It has provided local firms with domestic and foreign market information so that they can pen suitable production plan.

The provincial authorities have ordered the Department of Industry and Trade to join hands with competent departments and agencies to keep a close watch on the business and exports of local firms so as to remove bottlenecks for them in a timely manner.

Along with seeking more markets for local products, the department has worked to raise the firms’ awareness of the signed free trade agreement, helping them adjust their production to meet import demands of international buyers./.

The Hanoitimes – The issue was raised at a conference held between Vietnamese government agencies and major Japanese enterprises in Vietnam to address their issues.

The issue was raised at a conference held between Vietnam’s government agencies and major Japanese firms in Vietnam, including Hitachi Asia Vietnam, TEPCO Power Grid, JFE Engineering, MUFG Bank, JERA, among others, on August 20, with the aim of addressing issues that are directly related to Vietnam’s business environment and affect Japanese businesses’ decisions to expand operations in the country.

Director of the Ministry of Planning and Investment’s Foreign Investment Agency Do Nhat Hoang considered the conference an important channel to help the Japanese business community better understand Vietnam’s investment policies and business environment, and for the Vietnamese government to identify its shortcomings to continue attracting high quality foreign direct investment (FDI).

Takeshi Masuyama, country head of MUFG Bank in Vietnam, said the bank would continue to cooperate with Hanoi-based Vietinbank to promote Japanese investment into Vietnam.

MUFG Bank is currently Vietinbank’s second largest shareholder with a 19.7% stake, behind the Vietnamese central bank with a 64.46% stake.

Vietnam remains a safe and attractive investment destination in the eyes of foreign investors. Year to July 20, 1,620 new foreign-invested projects were approved with total registered capital of US$9.46 billion, up 14.4% in capital year-on-year, while 619 existing projects were injected an additional US$4.7 billion, up 37% in capital.

The country is home to 33,000 foreign projects with registered capital of a combined US$380 billion from 137 countries and territories. In this regard, Japan is the second largest investor with over 4,500 projects worth US$60 billion.

A recent survey from the Japan External Trade Organization (JETRO) conducted at the end of 2019 on 3,500 Japanese firms revealed over 40% were considering expanding operations in Vietnam in the next three years, up 5.5 percentage points from a year earlier.

The JETRO in early July also released a list of 30 Japanese firms that are poised to receive subsidies from its government to move production facilities out of China, of them 15 eye Vietnam as a favorite destination.