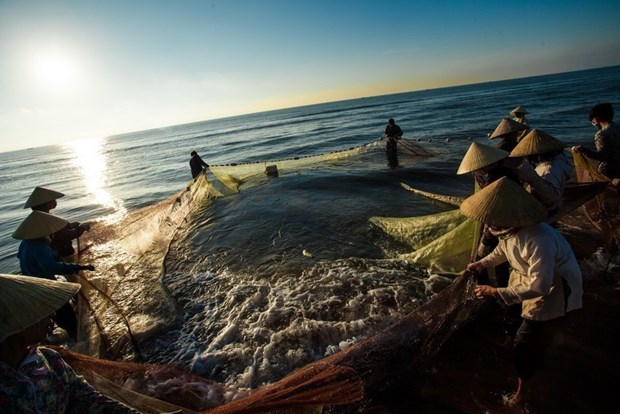 Hanoi (VNA) – Under Vietnam’s fisheries development strategy to 2030 and vision to 2045, the fisheries sector is applying itself to become an important sector in the country, strongly integrate into the world, develop sustainably and responsibly, and proactively adapt to climate change .

Deputy Minister of Agriculture and Rural Development Phung Duc Tien said that after continually posting rapid growth, the fisheries sector now has considerable production scale and value along with many products earning annual export turnover in excess of 1 billion USD.

Its product structure has changed strongly towards higher proportions of aquaculture and products with high added value, he noted, adding that aquatic products have been exported to about 160 countries and territories, in particular the EU, Japan, the US, the Republic of Korea, and Russia.

The presence of Vietnamese fishing boats and fishermen on the country’s seas has also greatly helped safeguard maritime sovereignty and security. The fisheries sector now provides jobs for about 3.9 million people, thus contributing to agricultural restructuring, according to Tien.

However, he acknowledged, there remain many problems facing the sector, which has yet to fully tap into its potential and advantages.

It is looking to earn 14-16 billion USD from exports and establish itself as a key national sector with sustainable development and proactive adaptation to climate change by 2030. Vietnam also targets becoming one of the three leading fisheries producers and exporters in the world by 2045.

He also called on relevant agencies to immediately pay due regard to the fight against illegal, unreported, and unregulated (IUU) fishing, noting that the Ministry of Agriculture and Rural Development has requested relevant sectors and localities soon complete steering boards on anti-IUU fishing and send members to the national steering committee so as to take uniform action to carry out recommendations from the European Commission, which has issued a “yellow card” warning on the issue to Vietnam.