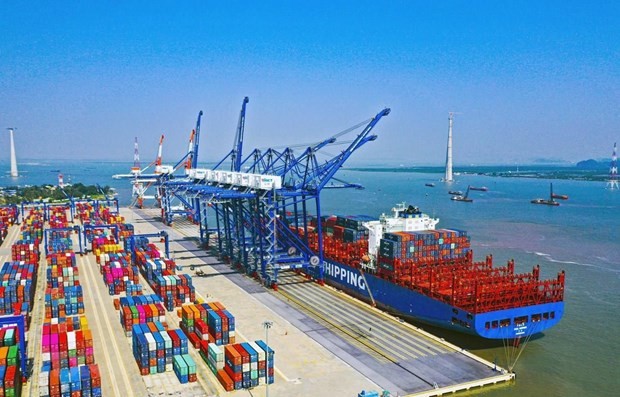 There is a lot of room for Vietnam and India to develop trade cooperation, and the most important thing is enhancing connectivity, especially infrastructure connectivity, via both land and maritime corridors. (Illustrative image. Photo: VNA)
Data from the General Department of Vietnam Customs shows that two-way trade between Vietnam and India surged to over $13 billion in 2021 from about $200 million in 2000. This has been a significant outcome, especially given major disruptions to supply chains during the Covid-19 pandemic. It is yet to match potential, however, Indian analysts believe.

"There is a lot of room for Vietnam and India to develop trade cooperation, and the most important thing is enhancing connectivity, especially infrastructure connectivity, via both land and maritime corridors," said Mr. Monish Tourangbam from the Amity Institute of International Studies at India's Amity University.

The opening of a shipping route between the central region of Vietnam and Kolkata – the capital of the Indian state of West Bengal – in July 2022 was therefore a significant development in bilateral trade cooperation, Mr. Tourangbam said.

"Pushing up bilateral relations in the economic domain needs a lot of work from both sides in terms of connections, whereby goods and container vessels can go in an uninhibited fashion across the Southeast Asian and South Asian regions," he added.

Speaking at the opening ceremony for the shipping route, Mr. Bui Trung Thuong, Head of the Vietnam Trade Office in India, noted that despite the major potential in trade between the two sides, one bottleneck is traffic connectivity, in particular the lack of a direct sea route connecting the two countries.

"This shipping route linking the central region of Vietnam and Kolkata, operated by the Vietnam Maritime Corporation, is therefore expected to open up great business cooperation opportunities," he said.

Similarly, Mr. Amitendu Palit, Senior Research Fellow at the Institute of South Asian Studies at the National University of Singapore, recognized all of the good things that have happened between India and Vietnam over the past 50 years, but nevertheless believes there remains a lack of connectivity between Vietnam and India.

"We need many more connections to make people in both countries realize they can travel to the other country quite easily," he added.

He highlighted the importance of developing air links to facilitate travel between Vietnamese and Indian tourists, students, and businesses.

"I think it is important for both countries to move to a system where they can grant visas to each other," he went on. "If this can be done, it would become much easier for investors, including Indian investors and others who view India and Vietnam as important locations for supply chain investment."

It is also important for the business chambers of both countries to meet and engage much more often to discuss emerging opportunities, Mr. Palit suggested.

He added that Vietnam and India are individually pursuing a lot of economic policies, which can be of benefit to each other. For example, India has production incentive policies for a large number of industries, while Vietnam has signed many free trade agreements. "India and Vietnam should therefore increase business dialogue to boost mutual understanding," he said.

Meanwhile, Mr. Tourangbam commented that there are a lot of opportunities from the diversification of supply chains as a result of the pandemic. Vietnam and India could improve their trade ties by trying to diversify trade pacts in numerous areas, he suggested.

Last December, the two countries struck dozens of cooperative agreements in various fields at the Vietnam-India Business Forum in New Delhi, including in human resources training in information technology, oil and gas processing, and energy.

Based on the growth of bilateral trade, which surpassed $13 billion last year, Vietnam and India are striving to hit $15 billion this year.

Mr. Chintamani Mahapatra, Rector of Jawaharlal Nehru University, described Vietnam and India as among the fastest-growing economies in the Indo-Pacific region, so is optimistic that the two can work together to realize their "laudable goals".

International organizations such as Moody's, the World Bank (WB), the International Monetary Fund (IMF), and the Asian Development Bank (ADB) have forecast that Vietnam will post GDP growth of 8.5 percent, 7.2 percent, 7 percent, and 6.5 percent, respectively, this year.

Mr. Mahapatra contends that Vietnam's economy is doing much better than any other country in the Indo-Pacific region. "And because India and Vietnam have been doing well, I think the trade goal can certainly be achieved," he said.

Given the ongoing developments in Covid-19, there remain certain bottlenecks that Vietnam and India may continue to encounter in promoting trade ties, according to Indian analysts.

However, there are still positive assessments on bilateral trade relations, they believe, adding that the two countries need to expand trade and surpass $15 billion.

Beyond the bilateral space, the Indian analysts also recommended the two countries utilize opportunities from multilateral economic frameworks. For example, both Vietnam and India joined discussions on the Indo-Pacific Economic Framework (IPEF) launched by the US in May 2022.

India is the second biggest country in the world in terms of population, while Vietnam ranks 15th with over 96 million people. The political relations between the two countries are long-term and have been further deepened since the establishment of diplomatic ties in 1972, according to Indian analysts. Both have their own strengths which can supplement to each other. If they can overcome challenges related to connectivity, it is certain that their trade relations in particular will grow robustly, which will not stand at some $15 billion, but even more.

Developing trade and investment with India has now become a priority of the Vietnamese government, while in its Act East policy, the Indian government has also placed importance to the relation with Vietnam.

Strengthening connectivity key to boosting Vietnam-India trade: Analysts have 1140 words, post on www.sggpnews.org.vn at October 6, 2022. This is cached page on VietNam Breaking News. If you want remove this page, please contact us.