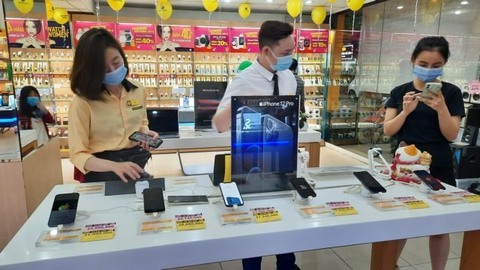 Stocks stumbled on Monday with the VN-Index falling below the 1,100 point mark as investors' optimism petered out amid strong selling forces.

The southern market index had dropped 5.9 per cent last week.

The market's breadth was in the negative zone as there were 449 decliners and only 49 gainers. More than 554 million shares were traded on the southern bourse, worth over VND11.5 trillion (US$481.2 million).

Of the VN30 basket, one stock advanced, while 29 settled down.

The banking stock group saw a series of decliners, with the largest market-cap Vietcombank (VCB) losing 3.6 per cent. Other banks like Vietinbank (CTG), Bank for Investment and Development of Viet Nam (BID), Sacombank (STB) and Techcombank (TCB) all hit the daily limit decline of 7 per cent.

The market was weighed on predominantly by insurance firms. In the sector, Bao Viet Holdings (BVH) lost 7 per cent, PVI Holdings (PVI) 8.9 per cent and Military Insurance (MIG) 7 per cent.

Securities was the next sector contributing to the market slump. Notably, VNDirect (VND) contracted 6.9 per cent in market-cap and SSI Securities (SSI) followed suit with a fall of 6.8 per cent.

In the realty sector, the trio stocks of the Vin family – Vingroup (VIC), Vincom (VRE) and Vinhomes (VHM) – saw mixed performances. The first gained 0.9 per cent, the second lost 6.8 per cent whereas the last fell 0.6 per cent.

The index had plummeted 5.4 per cent last week.

More than 60 million shares were traded on the northern exchange, worth VND1 trillion. —VNS

Shares tumble, VN-Index falls below 1,100 points have 448 words, post on bizhub.vn at October 3, 2022. This is cached page on VietNam Breaking News. If you want remove this page, please contact us.