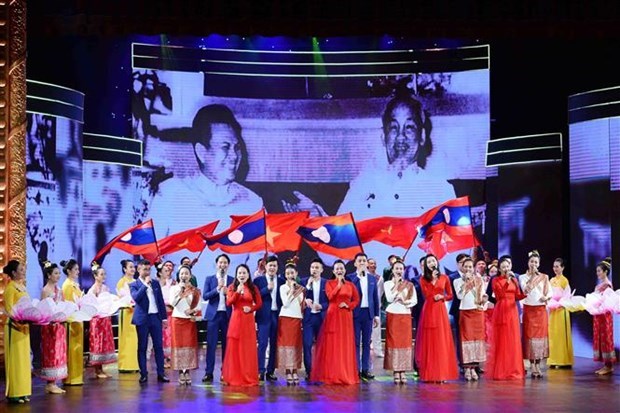 A singing performance at a television show that spotlighted Vietnam-Laos relations in Hanoi on August 29 (Photo: VNA)

Vientiane (VNA) – The Lao newspaper Vientiane Mai on October 6 ran an article highlighting the Vietnam-Laos partnership , affirming that the great friendship , special solidarity between the two countries should be preserved and further promoted for the common interest in the future.

It underlined the significance of the special friendship and comprehensive cooperation between the two countries. Over the past 60 years, Laos and Vietnam has always stood by each other to fight their common enemies and overcome all challenges, it said.

The article quoted Somsavath Lengsavath, a former Politburo member of the Lao People's Revolutionary Party and former Deputy Prime Minister, as saying at a talk held by the Laos' Ministry of Planning and Investment that the Laos-Vietnam Friendship and Solidarity Year in 2022 and the celebration of the 60th anniversary of bilateral diplomatic ties and 45 years of the signing of the Vietnam-Laos Treaty of Amity and Cooperation is a chance for the Lao side to express its gratitude to the Party, State and people of Vietnam for giving Laos great help during the struggle for independence in the past and current national defence and construction of Laos./.

Newspaper highlights significance of Vietnam-Laos ties have 301 words, post on en.vietnamplus.vn at October 6, 2022. This is cached page on VietNam Breaking News. If you want remove this page, please contact us.