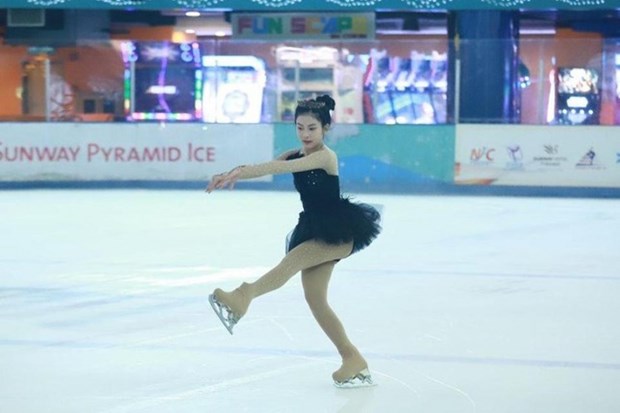 Hanoi (VNA) – The National Figure Skating Championship started on October 1 at Royal City Ice Rink in Hanoi , marking a return of the event after two years.

For the first time, the competition will be organised under international standards supervised by five international experts from the Republic of Korea, Thailand,  Indonesia and Malaysia along with seven local judges with certificates from the International Skating Union .

The two-day tournament will see 17 athletes including four who just competed at the Junior Grand Prix of Figure Skating events held in Europe last month.

Participants will compete in nine categories including Basic Novice, Advanced Novice, Adult Skating and Ice Dance for different age groups ranging from eight to under-21.

“It is an important tournament of Vietnam sport in general and the Skating Federation of Vietnam (SFV) in particular,” said Nguyen Trong Kien, Vice President of the SFV.

“It marks the return of figure skating after a long delay because of the pandemic. Athletes have been excited to perform again. SFV will seek new talented athletes to the national team to compete internationally,” he said, hoping that the event would inspire more people, especially the young, to join the skating movement in Vietnam./.

National figure skating championship kicks off have 287 words, post on en.vietnamplus.vn at October 1, 2022. This is cached page on VietNam Breaking News. If you want remove this page, please contact us.