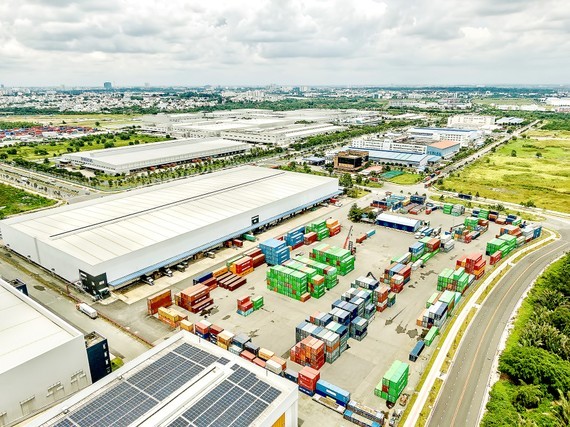 HCMC High Tech Park
Many obstacles
Deputy Chairwoman of the HCMC People's Committee, Phan Thi Thang said that with a population of more than 12 million, HCMC is a market of resumption as well as the largest distribution center in the country. The city has a competitive potential of road, air, and water transportation. It is convenient for connection and transportation of goods. However, the city is facing many problems hindering the development of the logistics industry, especially the transport infrastructure and human resource development.
The city's transport infrastructure has not met the current requirements. The projects of ring roads linking provinces and cities have been slowly implemented and are not commensurate with the development potential.
Small and narrow roads, the limited carrying capacity of the road, bottlenecks and intersections that are the main causes of traffic congestion, a lack of bridges having sufficient capacity to support vehicles to transport goods and connecting with export processing and industrial zones are some of the problems. In addition, seaports also are at risk of overload, Deputy Chairman of the Logistics Association of HCMC, Huynh Van Cuong noted.
According to Deputy Director of the HCMC Department of Industry and Trade Le Huynh Minh Tu, currently, nearly 30,000 logistics companies are operating in HCMC and 54 percent of the businesses are located in the city. Enterprises need about 8,400-10,000 employees per year. However, the training facilities have provided about 30 percent of the demand for human resources in the logistics industry.
Another problem that was mentioned at the forum is the lack of logistics centers in HCMC. The southern economic hub has planned seven logistics centers, but currently, only a logistics center located in the 6-hectare High Tech Park is calling for investment. The remaining facilities located in Hoc Mon, Cu Chi, Linh Trung, Long Binh, Cat Lai-Phu Huu, Hiep Phuoc and Tan Kien have just seen the planning.
In addition, digital technology has not developed synchronously, leading to unnecessary steps and an increase in logistics costs while the e-commerce market share is dominated by foreign enterprises.
Diversifying sources of investment capital in infrastructure 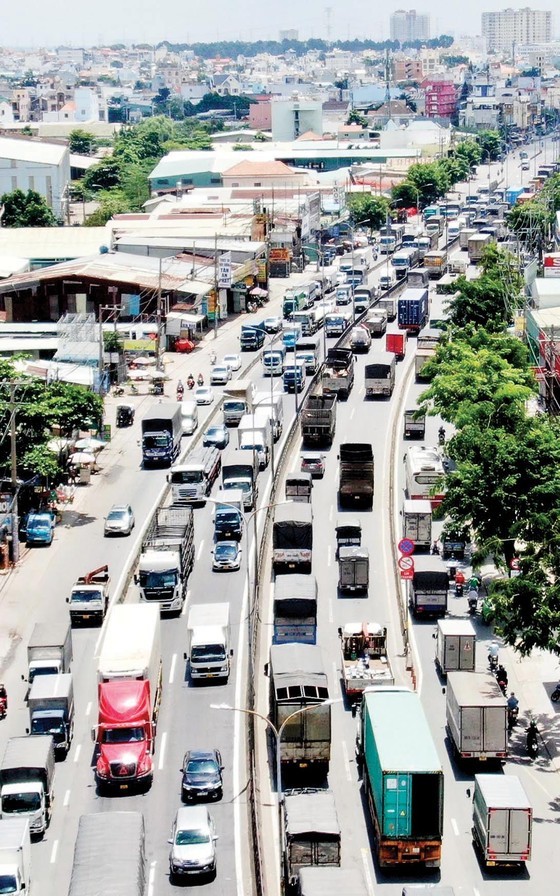 Traffic congestion on the National Highway 1A in Binh Tan District, HCMC
HCMC has worked with universities and vocational training centers and proposed to support 70 percent of the short course in human resource training costs for small and medium-sized enterprises (SMEs), and promoted the “state – school – enterprise” training model featuring international cooperation to improve training quality, reduce costs and re-training time for enterprises. The city has also actively proposed to cooperate with provinces and cities in the country to expand the training scale and share human resources.
Deputy Director of the municipal Department of Transport, Bui Hoa An said that HCMC needs a total investment capital of more than VND970 trillion (US$40.64 billion) for the synchronous development of transport infrastructure from now until 2030. At first, the city focuses on prioritizing projects of ring roads 2,3,4, HCMC-Moc Bai expressway , An Phu intersection, National Highway 50, a road linking Tran Quoc Hoan and Cong Hoa streets, metro lines 1 and 2, ports at the 6-hectares High Tech Park, Cu Chi, Phu Dinh stage 2 and Cat Lai Industrial Zone.
Additionally, the city should pay attention to investment in roads and railways. Businesses suggested that the city upgrade seaports and set up road infrastructure plans linking regions, seaports and logistics centers, develop sea transport, waterway inland transport, plan inland container depots and speed up the construction project of Can Gio Int’l Container Terminal .
HCMC determines logistics is one of the 49 key projects from now until 2025 with a vision for 2030.
Accordingly, the logistics industry growth rate is expected to reach 15 percent by 2025 and 20 percent by 2030. The industry's proportion of the contribution to the city's GRDP will be 10 percent by 2025 and 12 percent by 2030, contributing to lowering logistics costs compared to the country's GDP to 10-15 percent by 2025.

HCMC needs over VND970 trillion to develop transport infrastructure have 753 words, post on www.sggpnews.org.vn at October 1, 2022. This is cached page on VietNam Breaking News. If you want remove this page, please contact us.