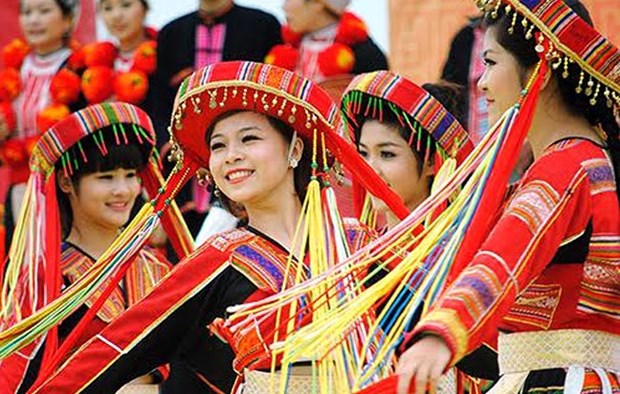 Hanoi (VNA) – A festival , slated for November 18-20, will spotlight traditional costumes of Vietnam ‘s ethnic minorities in the north at the Vietnam National Village for Ethnic Culture and Tourism in Son Tay town on the outskirts of Hanoi.

The Ministry of Culture, Sports and Tourism has freshly issued an organisation plan for the festival, the first of its kind, which aims to concretise policies of the Party and State on the conservation and promotion of ethnic minority cultures, and to honour such traditional cultural values.

The event will also offer an opportunity for ethnic artisans and artists to exchange experiences and learn from one another and for their communities to popularise their traditional culture to domestic and international visitors.

Themed 'The colours of northern ethnic traditional costumes amid integration and development era', it will gather representatives of 17 provinces and cities in the region, including Hanoi, Vinh Phuc, Phuc Tho, Hoa Binh, Son La, Yen Bai, and Lao Cai.

It is expected to feature a meeting with artisans and people who have made significant contributions to the preservation of ethnic culture, a seminar, a fashion show, and a number of exhibitions, among other activities.

Vietnam is home to 54 ethnic groups, each of which has its own unique cultural identity./.

Festival to showcase traditional costumes of Vietnam's ethnic minorities have 264 words, post on en.vietnamplus.vn at September 29, 2022. This is cached page on VietNam Breaking News. If you want remove this page, please contact us.