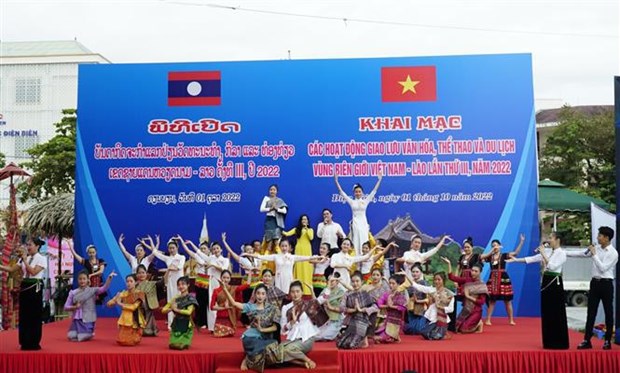 A performance at the opening ceremony of the Vietnam-Laos cultural, sport and tourism festival in Dien Bien province on October 1 (Photo: VNA)

Dien Bien (VNA) – The northwestern province of Dien Bien is hosting a Vietnam-Laos cultural, sport and tourism festival from October 1-3.

The festival, the third of its kind so far, has attracted the participation of ethnic artisans, artists and amateur athletes from 10 Vietnamese provinces bordering Laos, and 10 art troupes from Laos.

Activities during the event include demonstrations of festivals and ethic cultural practices, shows of ethnic costumes, displays of socio-economic achievements and cultural and tourism products of participating localities, folk art performances, and traditional sport competitions.

Field trips to survey tourism attractions in Dien Bien will also be held for delegations from Vietnamese and Lao localities.

Deputy head of the festival's organising board Nguyen Thi Hai Nhung said the festival is intended to praise the special Vietnam- Laos relationship and introduce the potential and strength in culture, sport and tourism of ethnic groups in areas along the Vietnam-Laos border .

It also testifies to the consistent policy of the Vietnamese Party, State and people on strengthening and developing the close bonds between the two Parties, States and peoples of Vietnam and Laos, she said./.

Dien Bien province hosts Vietnam-Laos border cultural festival have 297 words, post on en.vietnamplus.vn at October 1, 2022. This is cached page on VietNam Breaking News. If you want remove this page, please contact us.