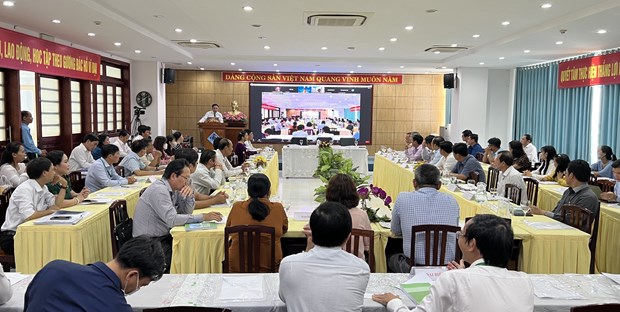 The conference in Can Tho city on October 4 (Photo: VNA)

Can Tho (VNA) – An international conference held in Can Tho city on October 4 looked into the system of policies for managing natural resources and the environment in the Mekong Delta, seeking to promote climate change adaptation.

The event was held both in person and via videoconference by the Academy of Politics Region IV, the Can Tho University , and the Northumbria University of the UK.

Participants pointed out that the Mekong Delta holds a strategic position and specially important role in terms of politics, economy, society, defence, and security.

The largest agricultural hub of Vietnam has a critical role to play in ensuring national food security as it produces 50% of the total rice output, 65% of the aquaculture output, and 70% of all fruits in the country while contributing to 95% of rice and 60% of fish export volumes. It also boasts some nature reserves and much potential for developing renewable energy like wind and solar energy.

Dr Phan Cong Khanh, Director of the Academy of Politics Region IV, said the Party and State's viewpoints on the sustainable development of the Mekong Delta in adaptation to climate change have been clearly demonstrated in many documents, including the Government's Resolution No 120/NQ-CP, which stress respect for the law of the nature, adaptation to the nature, and environmental protection in socio-economic development.

Those directions have been carried out and proved fruitful in the Delta. However, there remains shortcomings in the enforcement of policies on natural resource and environment management and climate change adaptation, he noted.

Experts presented some effective management models in Vietnam and other countries as examples, and suggested measures for sustainably developing the Mekong Delta in adaptation to climate change.

They said it is necessary to have an effective mechanism for bringing into play the role of the community, including local residents and enterprises, adding that a multi-level governance model in which power is decentralised, responsibility shared, and environment action committed could be useful.

Khanh said the development future of the Mekong Delta is depending much on the implementation of policies on natural resource and environment management, exploitation, and use, as well as those on economic restructuring and growth model reform in tandem with climate change adaptation.

Besides, promoting science, technology, and innovation, especially optimising achievements of the Fourth Industrial Revolution, to tap into the region's potential and advantages in a way that accords with the law of the nature is also important to seeking new impulses for sustainable development, he added./.

Conference assesses policies on natural resource management in Mekong Delta have 545 words, post on en.vietnamplus.vn at October 5, 2022. This is cached page on VietNam Breaking News. If you want remove this page, please contact us.