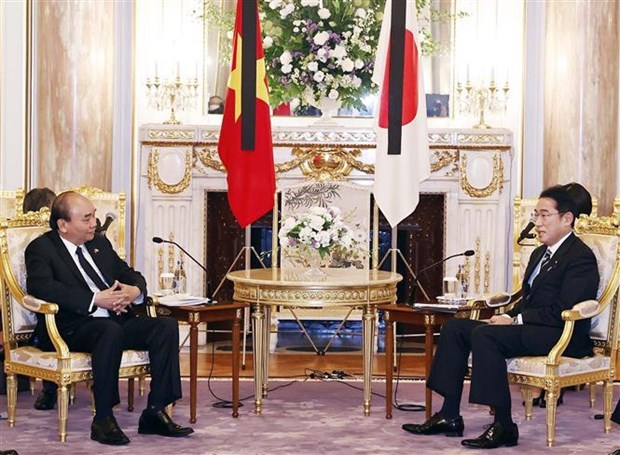 Tokyo (VNA) – President Nguyen Xuan Phuc had talks with Japanese Prime Minister Kishida Fumio in Tokyo on September 26 as part of his stay in Japan to attend the state funeral for former PM Abe Shinzo.

On behalf of the Party, State, and people of Vietnam, President Phuc offered his deepest condolences to the Liberal Democratic Party, parliament, Government, and people of Japan, along with the family of Abe, who he described as a "close friend" of the Vietnamese leaders and people.

He affirmed that Vietnam's leaders and people cherish former PM Abe's sentiment towards and significant contributions to the two countries' friendship and cooperation.

Vietnam always treasures the extensive strategic partnership with Japan, views Japan as an important and long-term strategic partner, and supports the latter in actively contributing to regional and global peace and development, the State leader said.

Japan particularly respects its relations with Vietnam and highly values the Southeast Asian nation's socio-economic achievements and growing stature and role in the region and the world, he went on.

The two leaders expressed their delight at the strong, comprehensive and substantive development of their countries' relations. They agreed on orientations for their extensive strategic partnership as the two sides celebrate the 50th anniversary of diplomatic relations in 2023.

In particular, they agreed to continue enhancing political trust through frequent mutual high-ranking visits; step up diplomatic, security, defence, and economic cooperation in an effective and substantive manner; increase people-to-people and cultural exchanges and tourism links; and coordinate to successfully organise activities marking the 50th anniversary of diplomatic ties next year.

They also agreed to strengthen collaboration in post-COVID economic recovery, while reinforcing the economies’ connectivity and enhancing strategic cooperation in priority areas such as providing new-generation ODA for Vietnam, developing high-quality human resources, and assisting Vietnam in industrialising and developing an independent and self-reliant economy that strongly integrates into the global economy.

It will continue reforming regulations and policies related to foreign workers, including those of Vietnamese nationality, and creating favourable conditions for Vietnamese people to live, study, and work in the country, he affirmed.

At the talks, the two leaders also discussed international and regional issues of common concern./.

Vietnamese President, Japanese PM hold talks in Tokyo have 534 words, post on en.vietnamplus.vn at September 26, 2022. This is cached page on VietNam Breaking News. If you want remove this page, please contact us.