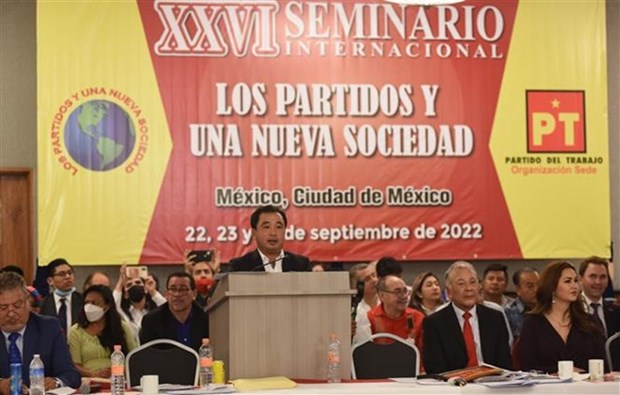 Tran Duc Thang, member of the CPV Central Committee and head of its Inspection Commission addresses the conference (Photo: VNA)

Mexico City (VNA) – A delegation from the Communist Party of Vietnam (CPV) joined 200 delegates from political parties of 30 countries at an international conference themed “Political parties and a new society” in Mexico City from September 22-24.

Addressing the event, Tran Duc Thang, member of the CPV Central Committee and head of its Inspection Commission said that the conference is a chance for participants to update each other on the situation of political parties and countries, discuss issues of shared concern, and seek ways to coordinate actions for peace, national independence, democracy, cooperation, development and social progress in Latin America and around the world.

He affirmed that Vietnam hopes to expand relations with ruling parties and political parties throughout the world, adding that the CPV always attaches great importance to fostering ties with traditional friends in Latin America and is ready to share experience with other parties for common development.

Thang briefed participants on the socio-economic situation of Vietnam as well as the implementation of the Resolution adopted at the 13th National Party Congress .

He thanked Secretary General Alberto Anaya of the Labour Party (PT) of Mexico, left-wing and progressive parties in the Latin American and Caribbean regions as well as friend parties in the world for supporting and accompanying the CPV during the past struggles for national independence and the current national construction and defence and socialism building.

For his part, the PT leader expressed his special sentiments towards Vietnam, and showed delight at the growing ties between the two Parties and countries, especially in health care, education and culture. He affirmed his wish to further promote the friendship and mutual support between the two countries at international and regional forums.

Within the conference’s framework, the CPV delegation held talks with PT Secretary General Alberto Anaya and had meetings with their counterparts from major political parties in Mexico as well as political parties and organisations from many countries such as Cuba, Uruguay, Argentina and Brazil.

The delegation also visited the Vietnam ese Embassy in Mexico and offered flowers at the statue of President Ho Chi Minh in Mexico City./.

Vietnam attends int'l conference of political parties in Mexico have 494 words, post on en.vietnamplus.vn at September 25, 2022. This is cached page on VietNam Breaking News. If you want remove this page, please contact us.