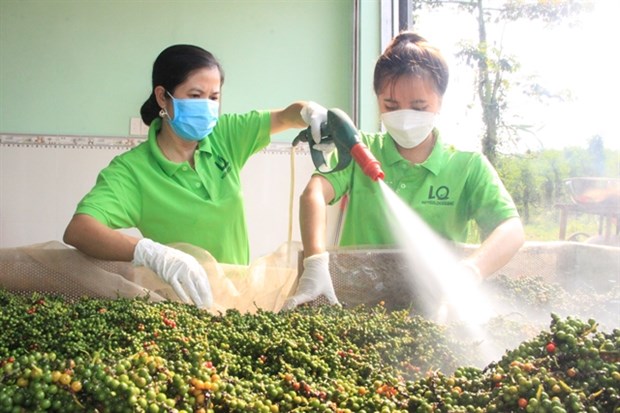 Hanoi (VNS/VNA) – There are great business opportunities for Vietnamese pepper exporters in the United Kingdom – a lucrative market with high demand for pepper imports.

According to industry experts, local pepper exporters can also take advantage of the UK’s supply shortages to increase exports of its key items such as pepper to the country as the impact of the COVID-19 pandemic, Brexit and the international sanctions against Russia have resulted in a supply instability and scarcity in the UK.

Currently, the UK is the second-largest importer and consumer of pepper in Europe after Germany and Vietnam’s pepper export s to the UK market have surged positively in recent years.

Later in 2021, the Southeast Asian pepper exports to the UK saw a significant year-on-year increase of 49%. In the first four months of 2022, pepper remained one of Vietnam’s major farm produce exported to the UK besides coffee and cashew nuts.

According to the Vietnam Trade Office in the UK, pepper is among Vietnamese agricultural products that have gained a foothold in the UK and have been selling well in big supermarkets.

It said Vietnamese farm produce such as pepper has an edge in the UK over similar products from countries which have not yet signed a free trade agreement (FTA) with the UK as the UK-Vietnam FTA has completely eliminated tariffs for pepper imported from Vietnam.

Local firms, however, can only avail of these competitive advantages if they can reach UK quality standards and match customer tastes, it said.

According to Phan Minh Thong, CEO of Phuc Sinh Group, which has been exporting pepper and other agricultural items to the UK for 10 years, though the UK is a large and attractive market, it is also a choosy one.

“It is necessary for domestic firms to develop sustainably and invest deeply in order to effectively tap into this market,” Thong told Vietnam News.

He added that pepper and other agricultural products could only make successful forays into the UK market once local producers ensure food safety and hygiene, gain sustainability certificates while churning out value-added products for exports.

For his firm, Thong said, it planned to export more processed pepper products to the UK to enhance its presence in the market and make better use of the tariff incentives that the UKVFTA has offered.

Trade experts say Vietnam has the potential to become a major supplier of farm produce to the UK especially after the UKVFTA came into effect. But it is important to learn about import demand, standards and requirements for exporting to the market.

Nguyen Manh Dat, Deputy Director of the Institute of Food Industry under the Ministry of Industry and Trade, said Vietnamese exporters should do thorough market research to ensure their products are of high quality and competitive in the market.

They must also ensure transparency for their products by developing websites and providing information about products, production lines, output, and trading partners, Dat said during a workshop on the UK market held recently in Hanoi.

The latest addition has brought the quality of pepper export in the first eight months of this year to 162,000 tonnes, valued at 739 million USD. During the period, pepper exports plunged 19% in volume but were up 11% in value year-on-year.

The VPA said the structure of export pepper products had seen a significant change. Local enterprises had reduced exports of raw pepper while increasing pre-processed or processed products.

Vietnamese pepper products have continued a leading position in the global pepper industry with the export volume accounting for 60% of global consumer demand.

In order to accelerate pepper exports, the VPA proposed overseas Vietnamese trade offices continue supporting the pepper industry in trade promotion, import and export development with foreign markets. Assistance from the offices in checking information of trade partners and banks at imported markets should be also included.

The association added that it had developed an international communication project to develop a sustainable market for Vietnam’s pepper and spice industry in the US, EU and the Middle East for the 2022-2025 period.

In the next three years, the pepper and spice processing industry of Vietnam will be introduced in specialised magazines in the target markets while the industry's image will be advertised on digital media channels and international social networks./.

Untapped opportunities for Vietnamese pepper exports to UK have 815 words, post on en.vietnamplus.vn at September 24, 2022. This is cached page on VietNam Breaking News. If you want remove this page, please contact us.