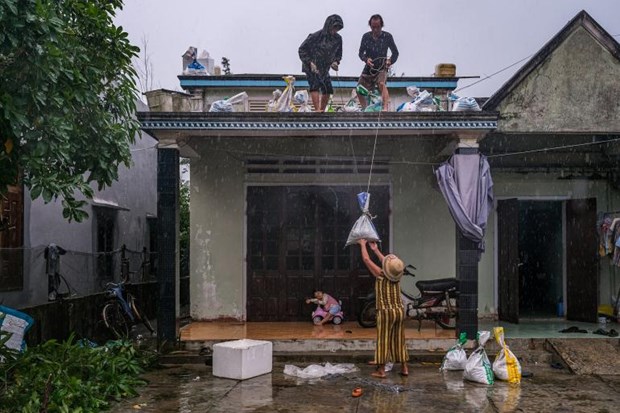 A family reinforces their roof before the arrival of Typhoon Noru in the south-central province of Quang Nam on September 27. (Photo: UNICEF)

Hanoi (VNA) – UNICEF Vietnam expressed its concern over children and families vulnerable to Typhoon Noru , saying it stands ready to support the Government of Vietnam in responding to the most powerful storm to hit Vietnam in 20 years, according to a recent statement.

More than 1.6 million children are at risk as Typhoon Noru is expected to make landfall on September 27 night in central Vietnam, said UNICEF, adding that it has supported prepositioning humanitarian supplies to contribute to the response in the areas likely to be affected, it added.

According to the National Centre for Hydro-Meteorological Forecasting, Typhoon Noru has increased its intensity compared to a day prior. It is expected to cause extensive damage and potential interruption of basic services, especially for vulnerable populations in Quang Tri, Thua Thien-Hue, Da Nang, Quang Nam and Quang Ngai.

Nearly 5.6 million people living in the region are likely to be affected by typhoon-force winds and torrential rainfall. Among them, one-third are children.

UNICEF said along with its partners, it is closely monitoring the situation and expressed deep concern for children and families at risk.

The typhoon poses a serious threat to the most vulnerable children and their families in the coming days, she said.

Children are most impacted by disasters due to their physical and psychosocial vulnerabilities, and the disruption of services essential for their development. Strong winds, flooding, landslides, and displacement may put them at increased risk of disease and poor nutrition, jeopardize their access to education and health care services, and make them more exposed to abuse, exploitation and neglect, according to the statement./.

UNICEF vows to support Vietnam in response to Typhoon Noru have 396 words, post on en.vietnamplus.vn at September 27, 2022. This is cached page on VietNam Breaking News. If you want remove this page, please contact us.