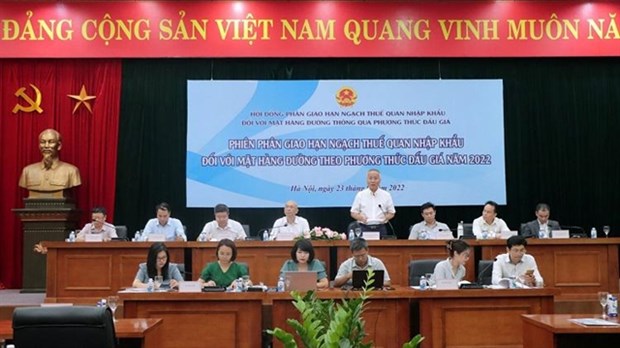 The Ministry of Industry and Trade held a session to allocate sugar import tariff quotas for businesses by auction. (Photo: vneconomy.vn)

Hanoi (VNS/VNA) – Seven enterprises were assigned tariff quotas with a total volume of 109,000 tonnes at a recent sugar import auction organised by the Ministry of Industry and Trade (MoIT).

Of which, five enterprises were assigned to import raw sugar and the others refined sugar.

The auction took place on September 23, with the participation of eight enterprises, including six registering to import raw sugar and two refined sugar .

Deputy Minister of Industry and Trade Tran Quoc Khanh said that to ensure a fair competitive environment between domestically produced sugar and imported sugar, the MoIT issued Decision No 1569/QĐ-BCT dated August 5 this year on the establishment of the Council for the allocation of tariff quotas for sugar imports through the auction method.

According to the plan announced in Decision 1649/QĐ-BCT dated August 22 by the ministry, the amount of imported sugar allocated by auction method is 113,000 tonnes this year, including 79,000 tonnes of raw sugar and 34,000 tonnes of refined sugar.

The Deputy Minister also said sugar importers will be subject to trade remedy tax of the Ministry of Industry and Trade if they import sugar from countries on the list of taxable countries.

Previously, the MoIT signed and promulgated Decision No 1578/QĐ-BCT applying anti-dumping tax and official anti-subsidy tax on a number of cane sugar products from Thailand on June 15 last year.

The ministry continued to issue Decision No 1514/QĐ-BCT applying measures to prevent evasion of trade remedies for a number of cane sugar products imported from Cambodia, Laos, Malaysia, Indonesia, Myanmar on August 1./.

Seven enterprises assigned to import over 100,000 tonnes of sugar have 375 words, post on en.vietnamplus.vn at September 27, 2022. This is cached page on VietNam Breaking News. If you want remove this page, please contact us.