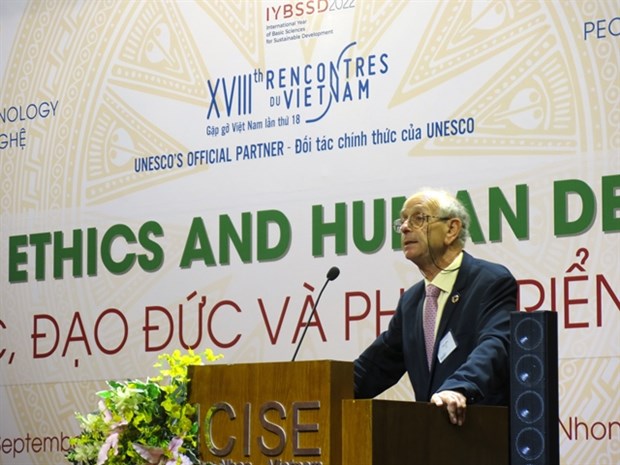 Binh Dinh (VNA) – Every scientist should think of how their findings could impact the world and contribute to making it better.

That was the message from Michel Spiro, President of the International Year of Basic Science for Sustainable Development (IYBSSD) speaking at "Science, Ethics and Human Development" conference on September 13 at the International Centre for Interdisciplinary Science and Education (ICISE) in Quy Nhon City, Binh Dinh province.

The event is the third in a series of international conference s on science and society, which has been organised regularly since 2016 by the association Rencontres du Vietnam, under the leadership of Vietnamese-born physicist Jean Tran Thanh Van.

In a panel discussion following the opening, Phan Thanh Binh, former president of the Commission of Education at the National Assembly of Vietnam, said: "Scientists are curious and want to explore, discover new things, while policymakers want things do things in order.

"There is a distance between science and policymaking, both need to be aware of that and bridge that gap, because science is the foundation for development."

Sharing the same perspective, Dennis Naughten, member of the Inter-Parliamentary Union (IPU) Working Group on Science and Technology added: "Scientists or policymakers, we all strive for the same thing, which is to solve problems."

Emphasising the need to convey ideas in simple terms to increase people's understanding and trust, Karen Hallberg, research director from Argentina's Atomic Centre of Bariloche added that scientists need to clearly communicate the limitations and uncertainty in their knowledge as well, citing mask mandates in the world as an example.

She added: "Scientists are not here to defend our own topics, but to inform and contribute to decision-making."

Omar Mokhtar, Senior Advisor to the General Secretary for the Interparliamentary Union (IPU) said the world is now divided by wars and hurt by the pandemic, emphasising that scientists should come together despite conflicts to form a united front.

Praising Vietnam as a good example of rebuilding a country after the wars, Mokhtar went on to explain why ICISE was chosen as the host of this flagship event for Asia.

Omar added: "This centre is probably the most important centre in Vietnam. Its role is growing because now it is not only about science and politics, but also the future."/.

Science should contribute to making the world better: experts have 645 words, post on en.vietnamplus.vn at September 14, 2022. This is cached page on VietNam Breaking News. If you want remove this page, please contact us.