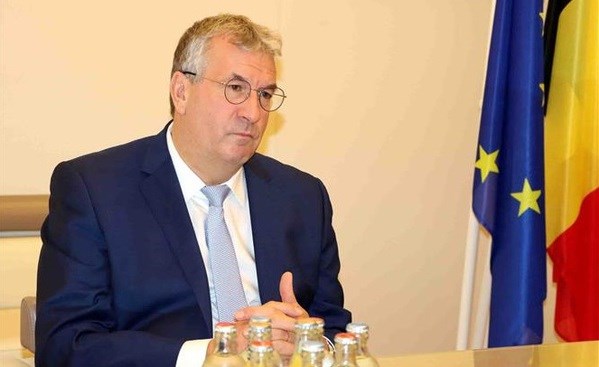 Brussels (VNA) – The French Community of Belgium (Federation Wallonie-Bruxelles), with its expertise and experience in education and training, wishes to focus on collaborating with Vietnamese partners and universities in teaching French language serving tourism activities – a promising cooperation area, said Prime Minister of the community Pierre-Yves Jeholet .

Jeholet noted that as Vietnam has put COVID-19 under good control, the country has welcomed a large number of tourists, 40% of whom speak French.

He said that the partnership between the community and Vietnam has been growing despite COVID-19 impacts, with the community just marking its 25 years of presence in Hanoi.

Over the past 25 years, the ties have been thrived in all aspects, he said, stressing that today, more than ever, for the French Community of Belgium, Vietnam has always been a priority partner in all fields from health care, culture, society, to academic and economic cooperation as well as French language promotion because Vietnam is a member of the International Organisation of La Francophonie (OIF).

Vietnam and the French Community of Belgium set up their relations in 1993. In 1996, the Office of the Wallonia-Brussels delegation was established in Hanoi.

All 783 joint projects between the two sides have produced fruitful results, he said, adding that 805 Vietnamese students have received scholarships and 2,000 experts have been exchanged.

Bilateral partnership has concentrated on areas such as health care, environment, new technology, tertiary training, scientific research, culture and French language promotion. Wallonia-Brussels has made considerable contributions to the development of the network of family doctors in most Vietnamese localities./.

French Community of Belgium wishes to partner with Vietnam in French teaching for tour guides have 387 words, post on en.vietnamplus.vn at September 27, 2022. This is cached page on VietNam Breaking News. If you want remove this page, please contact us.