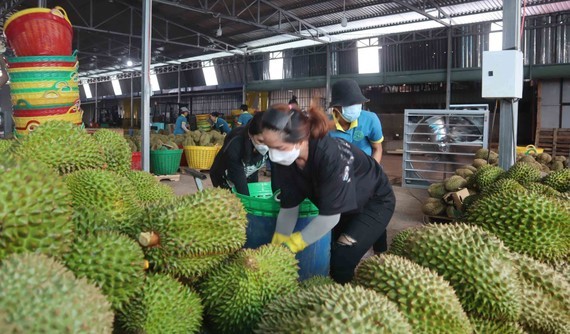 Durian farmers are joyful at news of official export to China
Resident Huynh Van Muoi in hamlet 3 in Cam Son commune of the Mekong Delta Province of Tien Giang's Cai Lay District said that nearly 8,000m2 of his family’s durian plantation has applied the production process according to VietGAP standards and participate in the local cooperative group.
In the past time when durian has not been exported to the Chinese market, he suffered price fluctuation after harvesting the fruit. During the bumper harvest, the price dropped, and traders didn't buy even dropping their stakes, making durian growers insecure. He said therefore, farmers are excited at the news that China is importing durian from Vietnam through official channels
Tien Giang is the leading province in the country in terms of durian growing area, yielding more than 25 tons a ha with an output of nearly 231,000 tons. The province has more than 110 establishments purchasing, packing and processing durian with 30 cold warehouses containing a total capacity of about 3,000 tons.
In the past, 70 percent of durian in Tien Giang Province was sold to the Chinese market through a small quota. From 2018 up to now, the agricultural sector has guided gardeners to cultivate according to VietGAP standards and has had 15 establishments with 184 hectares certified VietGAP, with an output of more than 3,600 tons annually.
Out of 51 planting area codes, the Southern Province of Binh Phuoc has 5 plantations with more than 300 ha of durian that have been granted the codes. Mr. Truong Van Dao, Chairman of the Board of Directors of Bau Nghe Cooperative, said that the cooperative currently has more than 140ha of durian, most of which have been harvested. When the Chinese side grants planting area codes which are qualified for official export, the first durian containers of the cooperative are expected to be exported to this market in the early fourth quarter, Mr. Dao said.
Similarly, Nong Thanh Phat Fruit Cooperative in Binh Phuoc Province's Phu Rieng District with more than 30 members, just granted the planting codes, is busy preparing for the first containers of durian to be exported to the Chinese market. Mr. Nguyen Xuan Hoa, director of the cooperative, said that right after the cooperative was granted the code, the cooperative will link with export businesses to sell products to raise the value of the fruit.
According to the Binh Phuoc Department of Agriculture and Rural Development, many durian growers realized the potential for durian export, so they soon thought and changed the production chain. Binh Phuoc also outlined a roadmap to officially export durian to China with 1,500ha for 33 planting areas.
Ms. Le Thi Anh Tuyet, Deputy Director of Binh Phuoc Department of Agriculture and Rural Development, said that with good climate and soil conditions, the province is suitable for growing durian. After three years, this year, durian trees on Binh Phuoc land gave fruits with a sweet taste, fragrant citrus, and thick flesh. Binh Phuoc has good condition to build its durian brand name.
Being the province with the second largest durian area in the country, the Central- Highlands Province of Dak Lak is likely to harvest 170,000 tons of durian in 2022 and over 300,000 tons by 2025. According to Vice Chairman of Dak Lak Provincial People’s Committee Y Giang Gry Nie Knong, the General Administration of Customs of China has approved four durian packing facility codes in Dak Lak and 23 planting area codes accounting for 45 percent of approved codes nationwide with an area 1,500ha accounting for 18.3 percent of the durian area in the province.
In addition, the province has established 17 new durian production cooperatives, bringing the total to 415 cooperatives. This is an important condition for the official export of fresh durian to China.
The Sub-department of Cultivation and Plant Protection of Tien Giang Province in the Mekong Delta has just sent a document to localities growing the fruit to encourage them to submit an application for a planting code and a packing facility number.
Mr. Dang Van Tuan, Acting Director of the Department of Industry and Trade of Tien Giang province, said that the province will organize a workshop to guide the official export of agricultural products to the Chinese market. Furthermore, the Department will guide localities and durian growers to actively produce to meet regulations.
Elsewhere in the Mekong Delta region, Mr. Mai Van On, Head of the Department of Agriculture and Rural Development in Long An Province's Tan Thanh District, said that the agricultural sector is guiding gardeners to complete the procedures for grant of planting area code and how to apply standards such as plant quarantine, food safety, Covid-19 prevention, keeping a production diary.
According to Mr. Bui Thanh Liem, Head of the Department of Agriculture and Rural Development of In Ben Tre Province's Cho Lach District, the locality is completing the procedures to grant planting area code for durian grown in Hoa Nghia commune with an area of more than 45ha. The agricultural sector is continuing to encourage cooperative groups and cooperatives to develop local organic durian orchards to meet the conditions of official export to the Chinese market.
Mr. Vo Van Nam, Director of the Sub-Department of Cultivation and Plant Protection of Ben Tre Province, said that the province has nearly 98 hectares of durian certified with VietGap. It is expected that two planting areas in Tan Phu commune in Chau Thanh District and Hoa Nghia in Cho Lach District will be granted codes. Currently, the sub-department has completed the dossier and sent it to the Plant Protection Department and is waiting for the Chinese authority to issue codes that are qualified for official export.

Durian farmers joyful at news of official export to China have 1106 words, post on www.sggpnews.org.vn at September 28, 2022. This is cached page on VietNam Breaking News. If you want remove this page, please contact us.