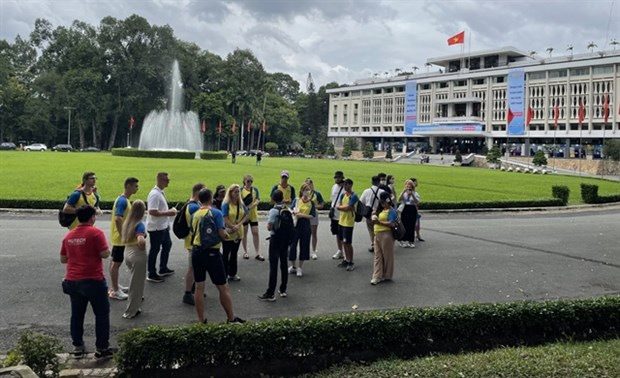 HCM City (VNS/VNA) – Strict visa policies and a shortage of human resources and infrastructure in the tourism sector have stymied recovery of the travel industry, and the target of five million international arrivals this year could be out of reach, industry players have warned.

Domestic travel has seen a strong rebound whereas international tourism, with a target of five million arrivals this year, remains in a slump, said Vu The Binh, Chairman of the Vietnam Tourism Association.

Domestic visitor numbers topped 71.1 million in just the first seven months of this year against a full-year target of 60 million, he said.

In the same period there were only 733,000 international visitors, or 8% of pre-pandemic numbers, he told a two-day programme titled 'Lien Ket Suc Manh Du Lich Vietnam Nam 2022' (Power of Vietnam Tourism Linkages) that ended in Ho Chi Minh City on August 9.

If concerns related to visa policies are not swiftly addressed, international visitor arrivals to Vietnam are unlikely to be any higher during the busy international year-end travel season, she warned.

Tourism services have developed strongly at popular destinations such as Phu Quoc, Da Nang, Nha Trang, and Ha Long but other localities have not invested adequately in tourism services and promotions, she said.

The shortage of human resources is another factor hindering the recovery, she said.

Vo Anh Tai, Deputy General Director of Saigontourist Group, said inbound tourism plays a vital role in the growth of the tourism sector, and so it is hard to say the tourism sector is on the recovery track since the number of international arrivals remains modest.

Phung Quang Thang, Director of Hanoitourist, said the spending by the 18 million international arrivals in 2019 surpassed that of the 85 million domestic tourists, highlighting the vital role of inbound travel.

Phan Thi Thang, Vice Chairwoman of the HCM City People's Committee, said the tourism industry is a driving force for economic development, generates lots of new jobs and is an integral part of socio-economic growth.

She said the city's domestic travel has seen a robust rebound but not foreign arrivals.

To recover and achieve growth, the tourism sector needs to have more offerings, promotion and marketing programmes to attract international tourists, Thang said.

Minister of Culture, Sports and Tourism Nguyen Van Hung said tourists from some of Vietnam's major markets such as Russia, Japan and the Republic of Korea have not returned.

His ministry has proposed to the Government a range of policies for recovery, he said.

The Government has worked with related ministries to address visa policy-related concerns and they would soon be mitigated, he assured.

It has also stepped up international marketing and promotion activities to speed up recovery and growth of the tourism sector, he added./.

Vietnam mulls ways to boost inbound travel have 623 words, post on en.vietnamplus.vn at August 10, 2022. This is cached page on VietNam Breaking News. If you want remove this page, please contact us.