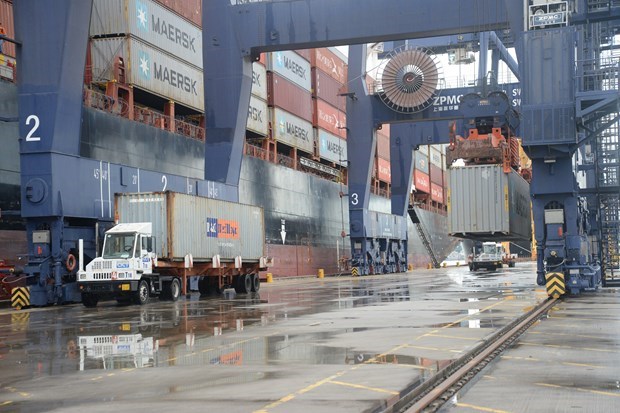 Hanoi (VNA) – Vietnam’s export revenue in 2022 is expected to reach an estimated 368 billion USD, a year-on-year rise of 9.46%, according to a report by the Ministry of Industry and Trade (MoIT).

The number would surpass the targets set by the Government and the ministry, at around 8%.

The report said that the country's import value is estimated at 367 billion USD in the year, resulting in a trade surplus of some 1 billion USD, fulfilling the set target.

The MoIT’s report showed that in the first six months of this year, export-import value stood at over 371.3 billion USD, including more than 186 billion USD worth of exports, up 17.3% from the corresponding time last year.

The export of the domestic economic sector rose 19.5%, higher than the 16.6% increase of the foreign direct investment (FDI) sector, including crude oil, the ministry said.

This result reflects efforts by domestic firms in production and business recovery and supply chain resumption amid difficulties.

Vietnam enjoyed a trade surplus of 743 million USD in the first half of the year, significantly contributing to stabilising the balance of payments, the exchange rate and other macroeconomic indicators of the economy.

According to Tran Thanh Hai, Deputy Director of the MoIT’s Agency of Foreign Trade, Vietnam experienced export growth in the markets it has FTAs with, ranging from 12%-34%.

He said a growth rate of 30% was seen in markets like Canada and Mexico.

The ministry said that high inflation in many countries might affect the consumption of non-essential imported goods, reducing the demand for imported goods from other countries, including Vietnam.

According to the MoIT, the positive import-export results in the year’s first half are the basis for the sector to achieve and exceed the targets set for the year.

The demand for Vietnam’s export goods is expected to continue to increase in the second half of 2022 following the commodity import and export cycle and thanks to the effective implementation of free trade agreements (FTA), especially the Comprehensive and Progressive Agreement for Trans-Pacific Partnership (CPTPP), the EU – Vietnam FTA (EVFTA), the UK – Vietnam FTA (UKVFTA) and the Regional Comprehensive Economic Partnership (RCEP).

Vietnam’s import and export activities are forecast to continue prospering in the near future.

The ministry said that the country’s import-export turnover would surpass the Government’s and the ministry’s targets at around 8%.

The ministry said it would keep a close watch on the COVID-19 situation, policy changes adopted by countries and major partners, and international trade to consult the Government in the management work.

Attention will be paid to implementing FTAs, especially new generation deals such as CPTPP, EVFTA, and UKVFTA, to support businesses to understand more about commitments in the FTAs to apply effectively and effectively promote preferences; make the most of opportunities, and limit challenges from these FTAs.

The MoIT also underlined the need to innovate the organisation of trade promotion programmes and virtually hold supply-demand connection events on new platforms.

National-level trade promotion programmes will be strengthened, while businesses will be supported to promote the export of farm produce.

Vietnam expected to enjoy 1-billion-USD trade surplus in 2022 have 685 words, post on en.vietnamplus.vn at August 24, 2022. This is cached page on VietNam Breaking News. If you want remove this page, please contact us.