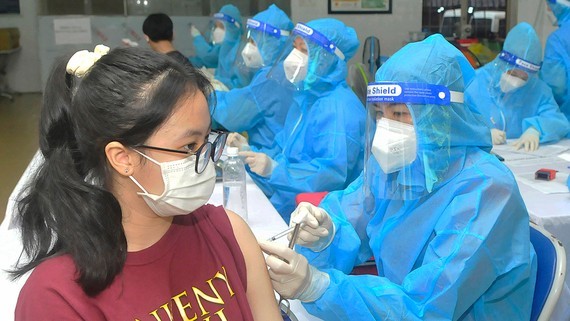 Vaccination must be prioritized amid complicated developments of diseases. (Photo: SGGP)
According to the monitoring results of the HCMC Center for Disease Control, the city has more than 7,000 high-risk points for dengue fever. From the beginning of 2022 to now, the whole city has implemented 328 sanctioning decisions according to Decree No.117/2020/ND-CP for places that let generate lots of mosquito larvae and mosquitoes capable of causing dengue fever. The sanctioning has been drastically implemented by local authorities in July and the first half of August. Specifically, 199 places in July and 74 places in August were sanctioned.

Regarding the Covid-19 vaccination for children, vaccination results have been more positive after the peak month was launched. After ten days of implementation, more than 13,000 doses are injected per day, on average, twice as much as before. However, the vaccination rate among children in the city is still lower than the national average.

Besides the districts that have made great efforts in the first week of the peak month, such as districts 7, 5, Phu Nhuan, Binh Thanh, Nha Be, Can Gio, Binh Chanh, Cu Chi, and Thu Duc City, some districts, including districts 1, 3, 4, 6, 8, 11, 10, 12, Tan Binh, Tan Phu, Go Vap, and Hoc Mon, have not accelerated injection speed in the peak month although their vaccination rates are low.

According to Dr. Nguyen Huu Hung, Deputy Director of the Department of Health of HCMC, in the context of the complicated development of diseases in the country and the risk of intrusion of emerging diseases, such as monkeypox and mysterious child hepatitis, vaccination should be the top priority. To achieve vaccine coverage among children, it is necessary to promote the role of schools and principals in mobilizing parents and students as well as organizing vaccinations together with the health sector.

By Thanh An – Translated by Thanh Nha

Vaccination must be top priority as many diseases develop complicatedly have 517 words, post on www.sggpnews.org.vn at August 15, 2022. This is cached page on VietNam Breaking News. If you want remove this page, please contact us.