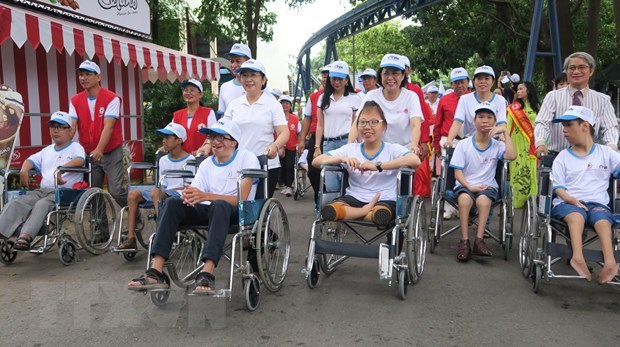 Many policies on the settlement of AO consequences have been carried out over the past years, including supporting AO victims. (Photo: VNA)

Hanoi (VNA) – Joining hands to soothe the pain caused by Agent Orange (AO) is not only a charitable or humanitarian deed but firstly an activity to express gratitude to revolution contributors and the sense of responsibility of each Vietnamese people.

Vietnam marks 61 years since the AO disaster on August 10 this year.

Sen. Lt. Gen. Nguyen Van Rinh, Chairman of the Vietnam Association of Victims of AO/Dioxin (VAVA), said the Party, State, and people have made wholehearted efforts with the highest sense of responsibility to care for revolution contributors, including those suffering from toxic chemicals in the resistance war and AO victims.

Many policies on the settlement of AO consequences have been carried out, he said, noting that the State has spent tens of trillions of VND each year on providing monthly allowances, health care, and functional rehabilitation for AO victims and aiding the AO-hit areas.

More than 320,000 people engaging in the resistance war and their children infected with AO are currently entitled to preferential policies for revolution contributors. Families of the disabled, including AO victims, have also benefited from health insurance or free medical services.

Hundreds of thousands of people with serious disabilities, including AO victims, have received orthopedic surgeries and functional rehabilitation while tens of thousands of children, including those suffering from indirect AO impacts, have been assisted to attend specialised schools.

Those policies have created favourable conditions for AO-infected persons who performed duties in the resistance war and residents in affected areas to have a stable life, Rinh went on.

Since the VAVA establishment in January 2004, more than 2.66 trillion VND (nearly 113.7 million USD) has been donated to the Fund for AO Victims, he noted.

There are now 12 peace and friendship villages along with a number of nursing centres for disabled children, most of whom suffer from deformities caused by AO. The reproductive genetic counselling centres in Hanoi and Ho Chi Minh City have also been working actively to reduce the rate of babies with birth defects. Some localities have also conducted psychological trauma surveys and provided mental health assistance for AO victims, he added.

Besides, VAVA has brought into play its role as the core force in fighting for justice for AO victims.

Rinh said the struggle for justice for Vietnamese victims of AO has been carried out in various forms and obtained significant outcomes.

In particular, since 2007, the US Congress has approved an annual budget for its country's Government to help with the environmental remediation of dioxin contamination in Vietnam. The remediation was completed at Da Nang Airport in 2018 and then moved on to the Bien Hoa airbase.

The US Government also carried out a programme to support AO victims during 2016 – 2020 at a total cost of 21 million USD. Another programme worth 65 million USD for the 2021 – 2025 period is being promoted in some provinces hit hard by toxic chemicals during the war, the VAVA leader noted.

He expressed his belief that with assistance from all-level authorities, sectors, localities, domestic organisations and individuals, as well as international friends, the AO pain will be gradually eased, and more AO victims and their families will surmount difficulties to move forwards.

According to VAVA, the US army sprayed 80 million litres of toxic chemicals on the south of Vietnam between 1961 and 1971, with 61% being AO containing 366kg of dioxin , on over nearly 3.06 million hectares (equivalent to nearly one quarter of the south's total area).

Preliminary statistics showed that 4.8 million Vietnamese people were exposed to AO/dioxin, and about 3 million people became victims. Tens of thousands of people have died while millions of others have suffered from cancer and other incurable diseases as a result. Many of their offspring also suffer from birth deformities./.

Tireless efforts made to soothe Agent Orange pain have 757 words, post on en.vietnamplus.vn at August 9, 2022. This is cached page on VietNam Breaking News. If you want remove this page, please contact us.