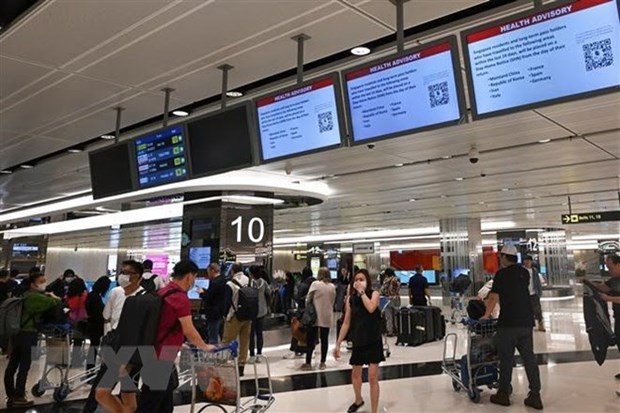 At the Changi Airport (Photo: AFP/VNA)

Hanoi (VNA) – Singapore 's Changi Airport is taking the lead in the recovery of air travel within the Asia-Pacific region, said Minister for Transport S. Iswaran.

Addressing the parliament on August 2, Iswaran said, as quoted by Channel News Asia, that the Changi Airport is "ahead in terms of both international passenger traffic and city links vis-a-vis pre-COVID levels" as of June, compared to major Asia-Pacific air hubs, such as Incheon (the Republic of Korea), Hong Kong (China) and Bangkok (Thailand).

As of the first week of July, its weekly passenger traffic has recovered to about 55% of 2019's average weekly levels.

Changi is also connected to 108 cities by passenger flights as of July 2022, which is more than 65% of the number of cities it was connected to before the pandemic, the minister said.

To meet anticipated traveller flows, Iswaran said that the airport will reopen Terminal 4 from September 13, and start departure operations in the southern wing of Terminal 2 in October.

The works will enable the airport to handle up to pre-COVID passenger traffic levels, or about 70 million passengers per annum, which represents about 80% of Changi's pre-COVID capacity, he said./.

Singaporean airport leads air travel recovery in Asia Pacific have 276 words, post on en.vietnamplus.vn at August 3, 2022. This is cached page on VietNam Breaking News. If you want remove this page, please contact us.