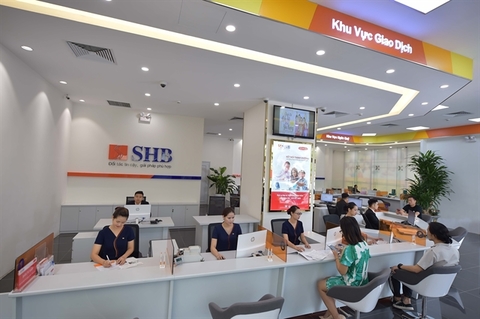 Clients at an SHB branch. The bank was given the nod on capital expansion. — Photo courtesy of SHB

The State Bank of Vietnam (SBV) has given the Saigon Hanoi Commercial JS Bank (SHB) the go-ahead to raise its charter capital to VND26,674 billion (US$1.1 billion).

The rise is the first part of SHB’s plan to reach VND36,459 billion in capital in 2022 to position itself among the three private commercial banks with the largest charter capital.

SHB said it had submitted the plan, passed by its shareholder general meeting, to SBV for approval.

Under the plan, SHB was also set to pay a dividend yield of 15 per cent to its existing shareholders for the financial year 2021 and offer a total of 45.12 million new shares for VND12,500 apiece to its employees and the shareholders.

With such optimistic figures, SHB believes that its annual profit target of nearly VND11.7 trillion is within reach. — VNS

SHB gets approval to raise capital have 299 words, post on bizhub.vn at August 14, 2022. This is cached page on VietNam Breaking News. If you want remove this page, please contact us.