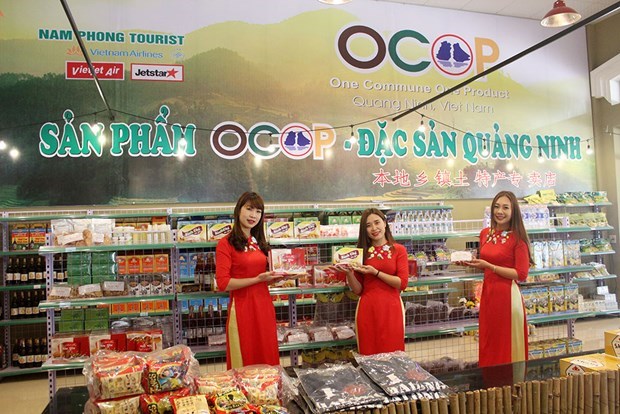 Hanoi (VNA) – The northern province of Quang Ninh now has more than 500 products developed by 189 companies, cooperatives and production facilities under the " One Commune , One Product " (OCOP) programme, local data shows.

Of the total, 267 have been rated from three to five stars. Most of OCOP products win preference by customers and have gained a strong foothold in the market, with many now available in foreign countries.

The COVID-19 pandemic has seriously disrupted production and supply chains, taking a heavy toll on the health of many OCOP producers, said Hoang Duc Kha, Deputy Director of the Industry and Trade Promotion and Development Centre under the provincial Department of Industry and Trade.

Kha highlighted an OCOP trade fair to be hosted by Quang Ninh for producers from northern cities and provinces on September 2 as one of the largest events. The fair will feature more than 250 booths with thousands of OCOP products on display. It is also expected to act as a platform for sellers and buyers to meet and form partnerships.

A similar but smaller event will take place in Mong Cai, a city in Quang Ninh bordering China, in November. Featuring some 200 booths, the fair will provide a chance for OCOP firms to boost sales and revenue, and connect with other businesses.

Additionally, the province has scheduled a series of four to five week-long fairs to promote OCOP products in urban areas and tourist destinations, such as Co To Island, Uong Bi and Cam Pha, where demand is high. A host of week-long festivals for products made in Vietnam will be held in the mountainous districts of Ba Che and Binh Lieu, with around 30 – 35 booths to be installed.

Quang Ninh is working to make OCOP an important economic development programme in association with new-style countryside building and agricultural restructuring during the 2021-2025 period.

By 2025, the province is set to have developed 300 new OCOP products, at least 250 of which will be rated from three to five stars.

Between 2017 and 2020, the local OCOP programme switched focus from quantity to quality as more than 200 products were rated from three to five stars, which is believed to have helped improve rural living conditions and contributed to building new-style rural areas.

Quang Ninh, one of the three nuclei of the northern key economic region, has implemented the OCOP programme since 2013, and it is now taking the lead nationwide in this regard.

The local OCOP programme entered a new phase in 2017 with the aim of developing large-scale concentrated production which focuses on diversifying and intensively processing products in value chains in order to increase benefits for the local community.

The collective and private economic sectors were identified as an important driving force for this programme.

OCOP products have generated an average of 500 billion – 700 billion VND (22 million – 31 million USD) in annual revenue for the province.

Achievements in the OCOP programme have substantially contributed to the new-style rural building in Quang Ninh.

The OCOP was initiated by the Ministry of Agriculture and Rural Development in 2008, based on Japan's "One Village, One Product" and Thailand's "One Tambon, One Product" programmes. It is an economic development programme for rural areas and focuses on increasing internal power and values, and is also to help with the national target programme on new-style rural area building./.

Quang Ninh revives OCOP product promotion to boost post-pandemic recovery have 706 words, post on en.vietnamplus.vn at August 18, 2022. This is cached page on VietNam Breaking News. If you want remove this page, please contact us.