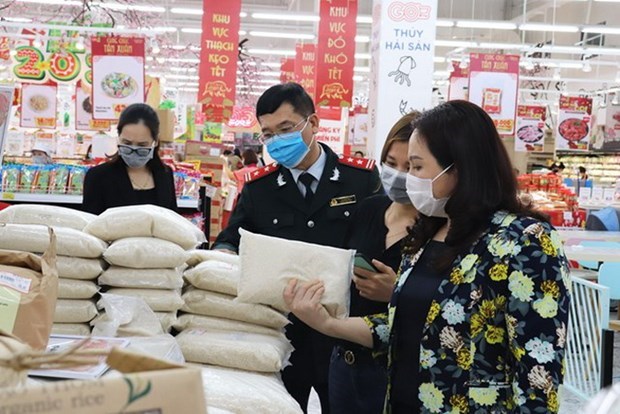 Quang Ninh (VNA) – The northeastern province of Quang Ninh has implemented many practical programmes to promote the consumption of local product s in the domestic market.

The province took the move in implementing Directive 03-CT/TW dated May 19, 2021 of the Party Central Committee's Secretariat on intensifying the Party's leadership over the campaign of "Vietnamese people prioritise using Vietnamese goods" in the new stage; and the Prime Minister's Directive 28/CT-TTg dated October 26, 2021 on bolstering the implementation of the campaign.

In the first seven months of 2022, the province's Department of Industry and Trade has organized or participated in 11 trade promotion events in and outside the province. This included one provincial-level event – the Quang Ninh Summer OCOP (One Commune – One Product) Trade Fair, which featured nearly 300 booths; and three district-level fairs.

The department has also held two Vietnamese goods trade fairs in the mountainous districts of Binh Lieu and Ba Che.

As a result, more than 50 OCOP products of localities in Quang Ninh have found their way into several chains of supermarkets and convenient stores, such as Go!, MM Mega Market, Aloha, and Winmart Vinmart, such as Long Hai mushroom, Van Don fish sauce and Bababi dry mantis shrimp powder. Many OCOP products from Quang Ninh are now available in major cities like Hanoi, Hai Phong and Da Nang.

Besides, the department has coordinated with other provinces and cities like Hai Duong, Son La, Bac Giang, Hung Yen and Ha Tinh to promote the sale of their respective farm produce and specialities, with the warm response from local agencies, sectors and distributing firms. For example, hundreds of tonnes of lychees from Bac Giang and Hai Duong, longan, mango and avocado from Son La, and citrus fruits from Ha Tinh have been sold in Quang Ninh through various channels, from traditional wet market and shops, to commercial companies and even State agencies.

According to Deputy Director of the Quang Ninh Department of Industry and Trade Nguyen Hoai Thuong, trade promotion activities in Quang Ninh have proved to be effective in creating links between producers and the market, helping introduce products to consumers. They also contributed to forming a favourable business environment for enterprises in and outside the province to meet and set up partnership, thus expanding their foothold in the domestic market .

The department said it will intensify coordination with the provincial market management agency in the fight against trade fraud and activities to maintain price stability in the market during the peak travel season and the shopping season at the end of the year.

The department also plans to hold training courses in applying e-commerce in production and business for local organizations, enterprises and individuals. It will guide and assist local enterprises in selling their products on major e-commerce platforms in the country like Sendo, Voso, Tiki and Shopee.

Quang Ninh posted an estimated year-on-year growth rate of 14.72% in total retail revenue in the first six months of this year

The province's Gross Regional Domestic Product (GRDP) expanded 10.66% in the period, which is 2.64 percentage points higher than the rate in the same period of 2021.

Also in the reviewed period, the province collected over 27.18 trillion VND (1.17 billion USD at current exchange rate) for the State budget, an increase of 18% year-on-year.

Total social investment in the period is estimated at 42.3 trillion VND, up 10.9% from the same period last year.

Quang Ninh is aiming for a GRDP increase of at least 11% this year, and budget revenues of not less than 52.6 trillion VND./.

Quang Ninh promotes consumption of local products in domestic market have 714 words, post on en.vietnamplus.vn at August 12, 2022. This is cached page on VietNam Breaking News. If you want remove this page, please contact us.