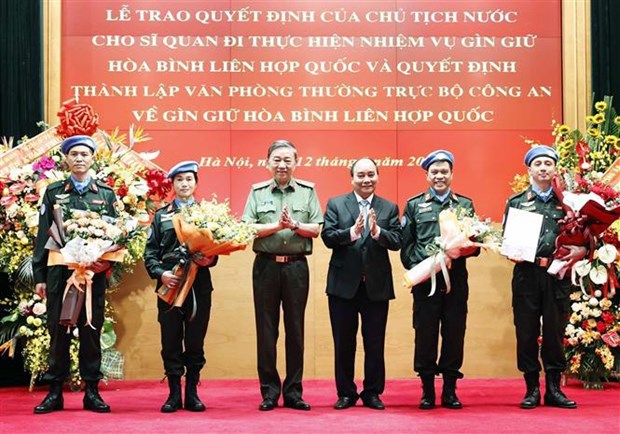 He expressed his delight that eight Vietnamese public security officers have met the UN's requirements. Four of them are to begin working at the UN headquarters and the UN Mission in South Sudan this year.

Amid complicated and uncertain developments in the world in the near future, President Phuc called for joining hands with the international community to seek solutions to traditional and non-traditional security challenges under the flag of the UN.

On the occasion, the Ministry of Public Security was assigned to work closely and effectively with the Ministry of National Defence, and boost cooperation with the UN, countries and global partners to improve the quality of training for officers at the level of the UN missions and strategic policymaking at the UN headquarters.

It is necessary to raise public awareness of Vietnam's participation in the effort at home and abroad, thus making effective and practical contributions to maintaining and protecting peace, stability and security in the region and the world, he said.

The President expressed his belief that Vietnam's UN peacekeeping officers in general and people's public security force in particular will overcome difficulties and accomplish their assigned tasks, thus meeting the expectations of the UN, the country and people, while deserving to be a part of the UN's "blue beret" force./.

President asks police officers to try their best to fullfill UN peacekeeping tasks have 559 words, post on en.vietnamplus.vn at August 12, 2022. This is cached page on VietNam Breaking News. If you want remove this page, please contact us.