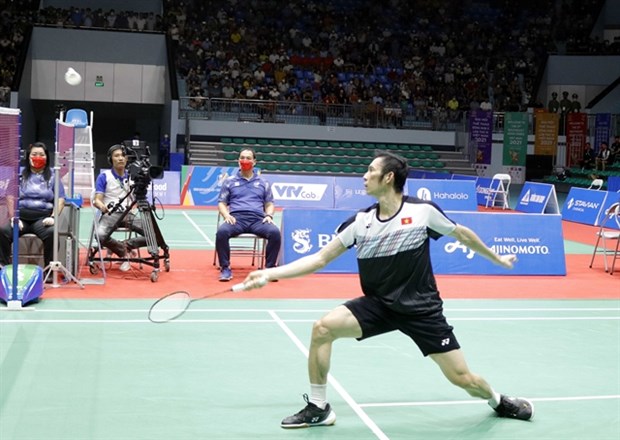 Nguyen Tien Minh on his way to taking bronze at the 31st SEA Games in May. He will be one of three Vietnamese athletes at the BWF Championship later this month. (Photo: VNA)

Hanoi (VNS/VNA) – Nguyen Tien Minh will set the record for the most appearances at the Badminton World Federation (BWF) Championship later this month.

The top ranked national player will take part in the event for the 13th time since his debut in 2005, one more than the current record held by Chinese legend Lin Dan.

Lin, who won five trophies, and Lee, who entered four final matches, retired in 2019 and 2020, respectively.

Minh is one of 54 male athletes at the tournament which will be held in Japan from August 22-28.

The world No 72 seed will come back to Tokyo’s Metropolitan Gymnasium one year after he competed at the Summer Olympics, where he failed to advance to the knockout round.

The 39-year-old from Ho Chi Minh City will be the oldest player at the tournament.

Other older athletes include Niluka Karunaratne of Sri Lanka and Pablo Abian of Spain, both 37.

Minh’s highest world ranking was No 5 in 2010 and his best world championship result was a bronze medal in 2013.

Last year, he was ousted in the first round in Spain. The four-time Olympian won a bronze medal at the 31st SEA Games in Hanoi in May.

On August 5, BWF also announced the list of female players.

Linh, world No 53, is Vietnam’s top-ranked female player. She just returned home from a competition tour to Singapore and Chinese Taipei.

Linh, 24, is hunting points to qualify for the 2024 Olympics. She first competed at the world event in 2018 in China. Last year, she was defeated by Chinese Han Yue in the first round.

Trang, No 69, was a long-time No 1 of Vietnam before she was overthrown by Linh a couple of years ago.

The 30-year-old recorded a better result than her compatriot, advancing to the second round in 2015 and qualifying for the last-eight round in 2019.

Linh and Trang were on the Vietnamese team that won bronze at the May SEA Games.

The world championship organisers have not yet held a draw but the competition will be run in a knockout format./.

Minh to take record of most appearances at badminton world championship have 540 words, post on en.vietnamplus.vn at August 10, 2022. This is cached page on VietNam Breaking News. If you want remove this page, please contact us.