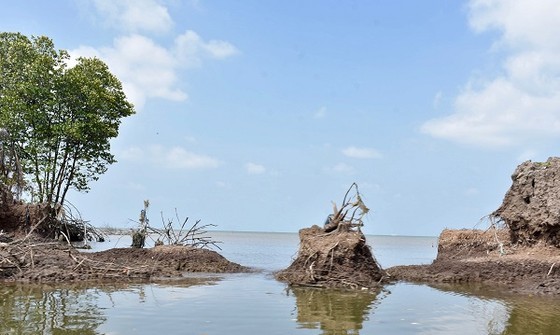 Sea dyke erosion always happens in An Minh District in Kien Giang Province. (Photo: SGGP)
Mr. Le Quoc Anh, Vice Chairman of Kien Giang Provincial People’s Committee, on August 8, said that he had signed and promulgated a project to prevent coastal and riverine erosion in the area from now to 2025 and orientation to 2030. Accordingly, the prevention of coastal and riverbank erosion should be carried out synchronously for both immediate treatment and long-term radical solutions associated with ecological environment protection, coastal mangrove forest protection and development, and creating livelihoods for local people.

Kien Giang is a province with more than 200 kilometers of coastline, running through many districts and cities, such as Kien Luong, Hon Dat, An Bien, An Minh, and Rach Gia City. The coastal protection forest belt is extremely crucial as it is a green shield against natural disasters, protecting sea dykes from erosion and landslides caused by waves.

In the plan of natural disaster prevention and control of Kien Giang Province, besides investing in construction works, the locality always pays attention to and gathers resources to plant coastal protective forests. Accordingly, besides the newly-planted and restored mangrove areas belonging to the projects of building breakwaters and creating sandbars on the West coast, Kien Giang Province has been growing a total area of forests, which is expected to be more than 644 hectares after the completion of the embankment construction projects. 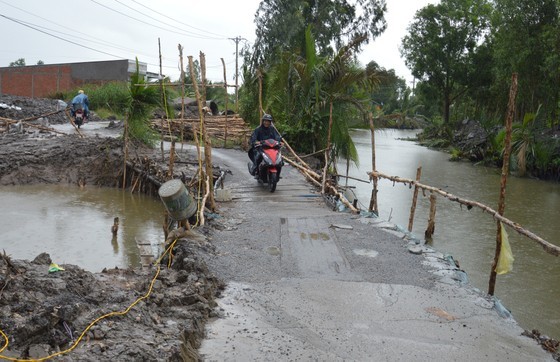 The Kien Giang Forest Management Board plans to plant alluvial and coastal protection forests. The main solution to protect newly-planted trees is to build soft walls. In the period from 2021 to 2025, the province will plant forests, including Avicennia marina and Sonneratia caseolaris trees, in the coastal alluvial plains of An Bien and An Minh districts, with a total investment capital of VND20.4 billion.

Mr. Nguyen Huynh Trung, Head of the Steering Committee for Natural Disaster Prevention, Search, and Rescue of Kien Giang Province, said that according to the above project, the province needs to build 200 construction works to prevent coastal and riverbank erosion, including 18 works to prevent coastal erosion and 182 works to prevent riverbank erosion. The total cost is nearly VND17.41 trillion. Of which, the Central Government is proposed to support VND17.345 trillion, and the rest is from the provincial budget.

Kien Giang Province invests more than VND17 trillion to prevent erosion have 478 words, post on www.sggpnews.org.vn at August 8, 2022. This is cached page on VietNam Breaking News. If you want remove this page, please contact us.