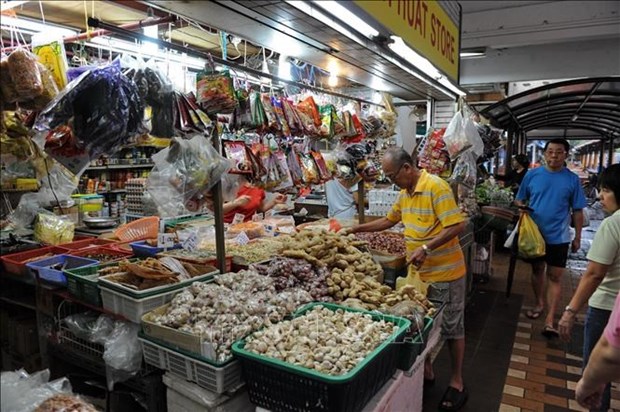 Inflation in Singapore expected to peak in Q4. (Photo: AFP/VNA)

Singapore (VNA) – Inflation in Singapore is expected to peak in the next two to four months and will start to ease thereafter, Deputy Prime Minister and Finance Minister Lawrence Wong has said.

In an interview granted to Bloomberg, Wong said inflation rates here may very well settle at a higher rate given the geopolitical environment, supply chain issues and how economies are transitioning towards becoming more sustainable.

He added that the extent of this easing towards the year end and where the new inflation rates will stabilise at are big uncertainties.

Wong noted that they are not likely to return to the rates Singapore had been used to over the last decade or so, as zero to 1% inflation was a historical anomaly and never used to be so low.

The Monetary Authority of Singapore (MAS) has already tightened monetary policy four times in the last nine months to dampen inflation, Wong said, adding that the agency's next monetary policy statement is scheduled for October.

Additionally, targeted measures to help the most vulnerable deal with rising prices have also been put in place, including a 1.5 billion USD support package announced in June to provide immediate relief.

If the inflation situation were to worsen, the Singaporean government will certainly be able to provide more assistance, he said./.

Inflation in Singapore expected to peak in Q4: official have 344 words, post on en.vietnamplus.vn at August 17, 2022. This is cached page on VietNam Breaking News. If you want remove this page, please contact us.