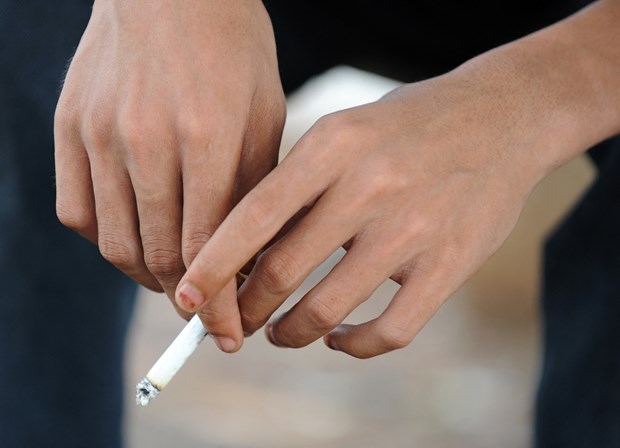 An underage smoker at a park in Jakarta, Indonesia (Photo: AFP/VNA)

Jakarta (VNA) – The Indonesian Government is planning to tighten its relatively lax regulations on smoking in a bid to curb the increasing number of child smokers in the country.

Under a planned new regulation, the Health Ministry of Indonesia is looking to control the promotion and packaging of e-cigarettes, which have remained unregulated since their legalisation in 2018.

The ministry is also seeking to increase the size of graphic health warnings on tobacco packaging from 40% to 90%, ban the advertising, sponsorship and promotion of tobacco products, and prohibit the sale of single cigarettes.

The number of underage smokers continues to increase each year, especially since the legalisation of e-cigarettes, Imran Agus Nurali, the ministry's director of health promotion and community empowerment, told a webinar on August 11.

He stressed the need for stronger measures to reduce tobacco consumption to protect future generations from the impact of smoking .

Banning the advertising, sponsorship and promotion of tobacco products is also crucial as according to the 2019 Global Youth Tobacco Survey, around 65% of Indonesia's children are exposed to tobacco ads through television, point-of-sale advertising, and billboards, he added.

Indonesia is the only country in Southeast Asia that still allows cigarette advertising on television and printed media.

Aside from revising the prevailing tobacco regulation, the government is also planning to further increase the cigarette excise tax next year.

Earlier this year, the Finance Ministry raised tobacco excise by 12%, leading to an average 35% increase in cigarette prices.

According to the Health Ministry, tobacco kills around 290,000 people in the country each year./.

Indonesia plans to tighten rules to curb underage smoking have 383 words, post on en.vietnamplus.vn at August 14, 2022. This is cached page on VietNam Breaking News. If you want remove this page, please contact us.