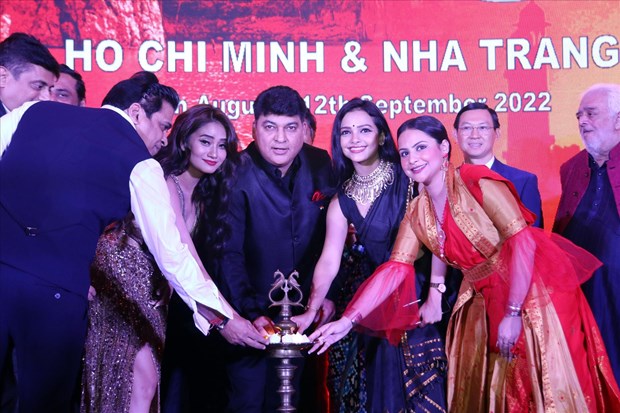 The event aims to boost cultural exchange and step up cooperation in trade, investment, education, information technology, tourism and healthcare between the two countries.

Addressing the August 13 opening ceremony in HCM City, Indian Ambassador to Vietnam Pranay Verma said the cultural festival was first scheduled for the beginning of this year on the occasion of the 50th anniversary of the two countries' diplomatic ties (January 1, 1972 – 2022) but had to postpone due to COVID-19.

It is also part of India 's Look East Policy in which Vietnam holds a very important position, he emphasised, noting that the festival plays a significant part in enhancing connectivity and cultural exchange, and beef up trade and investment between the two sides.

In his remarks, Director of the municipal Department of External Affairs Tran Phuoc Anh said he believes the event will be a success, contributing to taking the bilateral diplomatic ties to a new height.

He further said that the COVID-19 pandemic has wreaked havoc on the global economy and turned the lives of millions of Vietnamese and Indians upside down over the last two years. Despite it, the relations between Vietnamese and Indian people have grown closer than ever, he noted.

Now, he continued, with the virus kept at bay and the economy rebounding, is a good time for the two peoples to strengthen their bonds and explore opportunities for expanding partnership./.

Indian cultural festival underway in HCM City, Nha Trang have 417 words, post on en.vietnamplus.vn at August 14, 2022. This is cached page on VietNam Breaking News. If you want remove this page, please contact us.