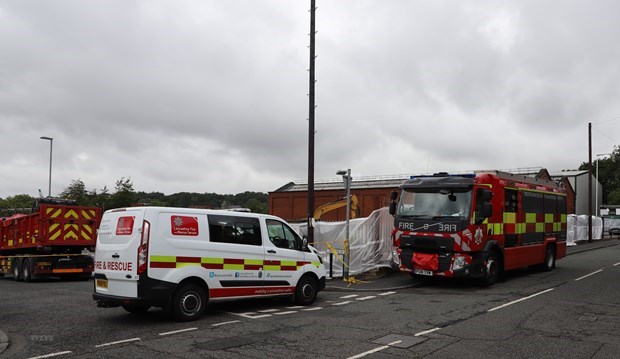 Local authorities seal off the scene of the Manchester fire . (Photo: VNA)

London (VNA) – Partial human remains recovered from Bismark House Mill in the UK have been identified, through fingerprint analysis, as Nguyen Van Uoc, according to the Vietnamese Embassy in the UK, citing an announcement on August 12 by Greater Manchester Police (GMP).

Uoc was one of four Vietnamese nationals who were reported missing to the police earlier and may have been inside the mill during a fire on May 7, 2022. The three others are Chu Van Cuong, Nguyen Van Duong, and Le Thanh Nam.

The 31-year-old maintained regular contact with his wife until the date of the fire, at which time he said he was in a mill.

Teams have been searching the remnants of the mill since demolition workers discovered human remains on Saturday, July 23, 2022.

Detective Superintendent Lewis Hughes, GMP's Victim Identification lead, said: "On behalf of all involved in Operation Logan, I send condolences to Uoc's wife and his loved ones." He said specially-trained officers are in direct contact with them and to ensure they are fully updated and supported.

According to him, enquiries are ongoing to establish why Uoc and other individuals, currently unidentified, were in the mill during the fire. He called on anyone with information which may assist the case's investigation should contact Greater Manchester Police or Crimestoppers, anonymously.

According to the Vietnamese Embassy in the UK, right after receiving the information from the local police, the Consular Department (under the Ministry of Foreign Affairs) contacted and sent condolences to the victim's family and guided them through the necessary procedures.

Counsellor and Deputy Ambassador of Vietnam to the UK To Minh Thu said that following the direction of the Ministry of Foreign Affairs and the Consular Department, the Vietnamese Embassy in the UK continues to actively and closely coordinate with relevant authorities in the UK and Vietnam to quickly complete the identification process of other victims, support victims' families with necessary post-mortem procedures, and at the same time expedite the investigation, and ensure the legitimate rights and interests of Vietnamese citizens.

First Vietnamese victim in Manchester fire identified through fingerprint have 502 words, post on en.vietnamplus.vn at August 14, 2022. This is cached page on VietNam Breaking News. If you want remove this page, please contact us.