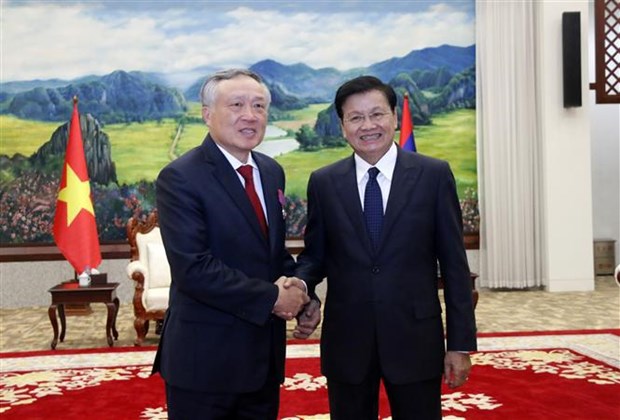 Binh informed the Lao leaders about the results of the sixth court conference of Vietnamese, Lao and Cambodian border provinces, saying that it afforded a chance for participating judges to share information and experience in dealing with cross-border civil cases. He added that cooperation among courts of the three countries have been stronger at both the central and local levels.

According to the official, Vietnamese and Lao courts will continue working closely together in different areas in the future, mostly in the exchange of delegations and training for Lao judges and judicial officers in Vietnam.

Thongloun spoke highly of collaboration between the two countries' courts at both the central and local levels. He also pledged to support their ties in the coming time.

In the morning of the same day, Binh attended a ceremony marking the 40th founding anniversary of the People's Supreme Court of Laos.

Speaking at the event, Lao Vice President Bounthong Chithmany highly valued the Lao court system's dedication to the cause of national construction and protection. He called special attention to tightening the Vietnam – Laos friendship, with ties between the two countries' courts being an indispensable part.

On the occasion, the Vietnamese side presented several electronic equipment to the People's Supreme Court of Laos./.

Chief Justice of Supreme People’s Court of Vietnam pays courtesy calls on Lao leaders have 471 words, post on en.vietnamplus.vn at August 12, 2022. This is cached page on VietNam Breaking News. If you want remove this page, please contact us.