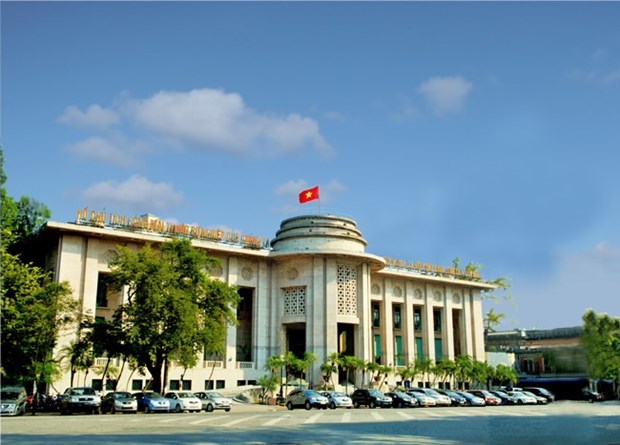 The State Bank of Vietnam (SBV)'s headquarters in Hanoi. The SBV withdrew more than 1 trillion VND through the bill channel in the first week of August. (Photo: SBV)

Hanoi (VNS/VNA) – The open market operations (OMO) have been more stable this month after the State Bank of Vietnam (SBV) reduced its intervention in the market.

In August, the SBV changed its policy, starting to withdraw cash out of the market through the OMO. It withdrew more than 1 trillion VND through the bill channel in the first week of August.

However, SSI analysts noted, the SBV has still applied the interest rate bidding method in the OMO, with a floor rate of 3.5% per year, with an aim to keep the interbank lending interest rates at high levels.

According to the analysts, the SBV's move to keep interest rates of dong loans in the interbank market at a high level is aimed at making a positive gap in lending interest rates between dong and US dollar loans, which will help reduce the need to hold the greenback among banks and indirectly cool down the foreign exchange rate.

By the end of last week, the USD/VND exchange rate on the interbank channel was traded at 23,389 VND per dollar, lower than the SBV's selling price of 23,400 VND per dollar.

The listed exchange rate at Vietcombank was at 23,250 VND and 23,530 VND per dollar for buying and selling, respectively, unchanged from last week.

Meanwhile, the exchange rate on the free market dropped sharply to 23,930 VND and 24,020 VND per dollar for buying and selling, significantly narrowing the gap compared to the official market.

According to SSI, although the exchange rate has cooled down, the pressure is still relatively high as the market has not yet determined the time and extent of interest rate hikes by the US Federal Reserve (Fed).

SSI forecast the SBV might have to take stronger measures to stabilise the exchange rate at the end of the year when the Fed's dollar interest rate is expected to reach 3.5-3.75% per year in December.

Therefore, SSI suggested the interest rate of dong loans on the interbank channel needs to hit a higher level to reduce pressure on the exchange rate.

According to Tran Ngoc Bau, General Director of financial data provider WiGroup, the strong surge of the overnight interbank interest rate from 0.3-0.5% per year to some 5% per year in the past few weeks showed the SBV no longer maintained its loose monetary policy in the interbank market.

In addition, he said, the fact that the SBV actively withdrew money through the bill issue channel, and at the same time limited the credit growth quota for banks, can be seen as signs of tightening monetary policy.

However, VCBS said, the fact that the Fed is still raising interest rates will make the greenback appreciate and maintain relative strength compared to other currencies. In this context, VCBS forecasts that the dong may depreciate by 3% against the dollar this year.

With the interbank interest rate, VCBS said the pressure from inflation has made the SBV act more cautiously and cannot maintain the abundant liquidity for banks.

However, VCBS expects the liquidity pressure in the interbank market will only happen in the short term and interest rates will gradually cool down at the end of the year, but are unlikely to return to low levels as per the average threshold of 2021./.

Central bank reduces intervention on OMO have 796 words, post on en.vietnamplus.vn at August 15, 2022. This is cached page on VietNam Breaking News. If you want remove this page, please contact us.